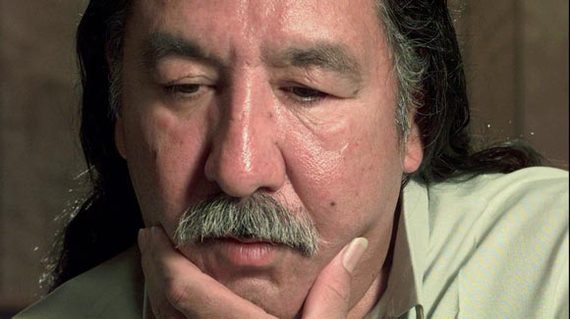 Indigenous peoples in the Americas, American Indians, have been decimated several times over. While a lot of loss came from diseases for which there was no native immunity, it is impossible to overstate the intentional displacement, disrespect, and active destruction of indigenous peoples. It is deeply distressing to see that legacy of active disregard continue to this very day. From sending smallpox-infected blankets as deadly "gifts" to the catastrophic Indian Removal Act, there are still only nominal notions of equality. In the current climate of indifference, neglect, and overt deprivation that continues to mar the lives of the descendants of the nation's original inhabitants and cultures, we should be aiming big by granting freedom to Leonard Peltier and changing the name of DC's NFL team as first steps. We should be acting in concrete ways now by supporting the human rights of this country's native peoples, and not kicking the can down the road.

In 1830, D.C. set the tone toward Indians with the Indian Removal Act, which saw entire nations of peoples displaced from their traditional lands and confined to Oklahoma. Forty years onward, a Union officer from the Civil War notable for his disbelief in racial equality and brutal tactics to win at all costs, was dispatched to secure the railroads in the West. Behaving with unbounded animosity to the task, writing even that he intended to "act with vindictive earnestness against the Sioux, even to their extermination, men, women, and children," William Tecumseh Sherman set the trajectory for the 1890 Wounded Knee Massacre, where American troops slaughtered hundreds of people on the Pine Ridge Reservation. A man named after a Shawnee chief, known for the savage destruction of civilian targets in the American South, was repurposed to be sent West to destroy native peoples. The intentional slaughter of the American Buffalo was intended to promote starvation and dependence, removing a plentiful and traditional food source (and one that interfered with federal intentions for the railroad) by killing over 50 million bison left to rot on the range.

In 1973, amid the peak popularity of the American Indian Movment (AIM), a protest formed at Wounded Knee against corruption and abuse and requesting treaty negotiations to be reopened with the US Government. Federal forces became involved and by the end of the resulting standoff, there had been two wounded federal agents and thirteen wounded and two killed on the AIM side. Two years onward, a shooting left two federal agents dead on the Pine Ridge Reservation. In 1977 Leonard Peltier was tried and sentenced to prison. He is still in prison. His trial's many legal flaws notwithstanding, even his extradition to the United States from Canada was based on premises that were actively manipulated by the federal authorities.

How could such a thing happen? Wouldn't there be an outcry if there had been a miscarriage of justice like that? Isn't it a stretch to think that there would be false information peddled by the federal government? The ability of the federal government to ignore the outcry of citizens has grown weaker in some areas and stronger in others, but the ability to centrally control information on and about a far-flung reservation in the West was far greater during a pre-networked era. The revelations of deceit and manipulation that we now know of from during the Iraq War should have us reminded that the antics of COINTELPRO and the like involved much cruder and wider tactics in the past against AIM and other groups. The willingness of the government to blindly assert lies has been part of the rulebook since the wars in Vietnam, Laos, and Cambodia and those same tactics were used against the AIM as well as the Black Panther Party and other dissident groups in the United States. If we are to move ahead in this country for human rights, we must confront the uncomfortable truths about our past human rights abuses.

We think it's okay to use mascots and names for sports teams like "Redskins," though we'd find it unconscionable to use similar terms to refer to any other ethnically-based sports mascot. We think that times are good for American Indians in this country but we fail to look at the very real and very grave problems that actually persist across the lives of native peoples today. On the one hand, lives on the reservations are not lives in some idyllic homeland any more than they were in the "bantustans" of South Africa, with the conditions currently experienced on places like the Pine Ridge Reservation continuing to suggest those found in grim undeveloped locations more than the United States.

Read what another, contemporary and native, Sherman has to say about the state of Indian life today here. Places like Pine Ridge are far more representative of reservation life than the scene painted by the false distorted idea of casino-fueled wealthy tribes. Importantly, Indians don't mostly live on reservations. They live mostly everywhere in the country, and are subject to disproportionate risk from poverty, addiction, and other troubles generated in the aftermath of five hundred years' oppression from being kicked around and off of their lands and ways of life.

What can be done? The United States could stand for restoring dignity and respect to the ways of life that were disrupted not only by European colonization and oppression that came before its existence, but of those parts of policy that were essential to expanding itself across the continent and to continuing to deny historic claims. The Bureau of Indian Affairs (BIA) was, not long ago, attached to the Department of Defense (itself not long ago the Department of War) in its dealings with indigenous peoples and nations. That footing, framing relations between the United States and pre-existing nations here, was (and still is) based on the idea of native nations as enemies to be defeated.

What might we do? We might undo all that. We might embrace the idea of replacing the name of the Washington NFL team as something that was not a recognized slur and hold the Dan Snyder to task for waiting so long. We might reach out with programs (ones that are actually adequately funded) to help native communities, both on and off reservations, grapple with the issues and concerns that ravage lives with poverty, addiction, and social dislocation. We might, notably, firmly take on the legacy of the past by giving a formal apology for the violations of treaties and abrogations of rights.

We might, finally, take a stand and free Leonard Peltier.

Let us honor the fallen agents with a step towards real justice and peace between the peoples of Pine Ridge and the federal government that has shown it such disregard for centuries. Let us turn another page, a better page, in the relations between the federal government and the native peoples of this country by taking a step forward to show good faith. Let us support clemency for Leonard Peltier and acknowledge the mistakes of the past and step forward with an eye to justice in the future. Let us begin to have the long overdue conversation in this country. Let us step into a world where a better name can be chosen for the Washington NFL team to honor the nation's original inhabitants (the Potomacs, perhaps) and where the dream of real equality, of real justice, is no longer imprisoned.

Honor the memory of Agents Williams and Coler by honoring a new era of peace between all peoples of this land. Honor the native concerns and grant freedom to Leonard Peltier so that he may not die in a federal prison. Honor the legacy that has allowed this country to flourish by honoring the original custodians of this land itself. Let us step forward into a new and justice-focused phase of real partnership among American Indians and all other peoples of these United States. Let us embrace equality on-and-off reservations and hold to human rights for all "without reservations."