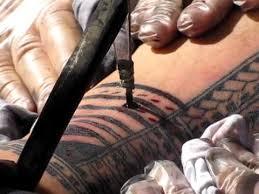 The Pe'a is the popular name of the traditional male tatau (tattoo) of Samoa and it covers the body from waist to the knees. The word tattoo in the English language is believed to have originated from the Polynesian word tatau.

The tatau process for the pe'a is extremely painful, and undertaken by tufuga ta tatau (master tattooists), using a set of handmade tools pieces of bone, turtle shell and wood. The tufuga ta tatau are revered masters in Samoan society. In Samoan custom, a pe'a is only done the traditional way, with aspects of cultural ceremony and ritual, and have a strong meaning for the one who receive it.

The tufuga ta tatau works with one or two assistants, often apprentice tattooists, who stretch the skin and wipe the excess ink and generally support the tattooist in their work. The process takes place with the subject lying on mats on the floor with the tattooist and assistants beside them. The assistants to the tattooists are referred to as the solo, a Samoan word describing the act of wiping the blood off the skin. The pe'a can take less than a week to complete or in some cases, years.

The ink colour is black. The tattoo starts on the back and finishes on the belly button. Overall, the design is symmetrical with a pattern consisting mainly of straight lines and larger blocks of dark cover, usually around the thighs.

During my 14-month tour of the Pacific Ocean, I stayed in Samoa for 3 weeks and built a warm and friendly relationship with the Samoan couple that owned the hotel where I stayed at, about one kilometre away from the centre of Apia (the capital of Samoa) and just off Taumeasina Island. I was invited by them to several events, including a Samoan wedding but the highlight was the invitation to attend the undertaking of a Pe'a by one of the masters done to a local man.

I arrived right after the beginning of the third session and I asked the master if I could videotape the process. He had been to the States on several occasions for tattooing shows, he asked me a couple of questions about Florida (my home State) and then gracefully agreed to allow me to videotape as long as I kept my distance.

Here's my remarkable video and documentary, certainly one of the top cultural experiences, not just of my world-tour, but of my life as well:

More:
travelTattoohistoricmale
Newsletter Sign Up
An essential daily guide to achieving the good life
Subscribe to our lifestyle email.
Successfully Subscribed!
Realness delivered to your inbox

Passionate traveler with interests in Art, History, all cultures, Science and Architecture, and Nature.