John Muir, ecologist extraordinaire, author and co-founder of the Sierra Club wrote: "The clearest way into the universe is through a forest wilderness!" Have you ever visited wilderness? If not -- why not?

Recently, I've received a spate of emails asking how I remain so positive in the face of massive global environmental degradation? In large part it is due to visiting wilderness, regularly. Near the summit of White Mountains of east-central California, at a couple miles above sea level, the ancient four and a half thousand year old Great Basin bristlecone pines are my 'slice of heaven' on Earth. 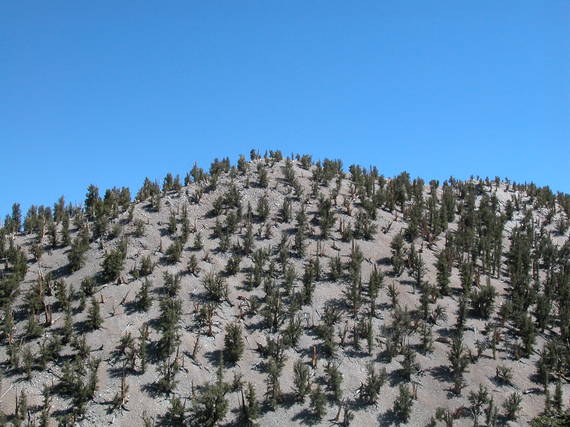 Further north and across western United States -- sublime wilderness areas are home to the incredible gray wolf. These splendid social animals are central to the health and wellbeing of the last bastion of wildlands in the lower 48.

Throughout history wolves have been portrayed as villainous critters, which could not be farther from the truth. These creatures are so important that when they eat so too do a host of other animals including: wolverines, lynx, bobcats, mink, weasels, hares, porcupines, squirrels, mice, voles, shrews, ravens and crows.

Moreover, the role of these apex predators is vital in preventing diseases from becoming epidemics across the West. For instance, wolves prey on old and weak ungulates (creatures with hooves) keeping their populations fit.

In the late 1960s humans waged a brutal, violent war against wolves. Gray wolves were relentlessly hunted, trapped and slaughtered. The 'ripple effect' of their loss was felt far and wide - ungulates overgrazed vegetation, stripped streamsides of plants and caused epic erosion, which destroyed fish habitat and significantly denigrated water quality across the entire West.

In 1974 after nearly wiping them off the face of the map, gray wolves were finally listed on the Endangered Species Act - offering the few remaining beasts an amnesty. Almost four decades later gray wolf populations are just beginning to stabilize within their former home ranges.

Why then is the U.S. Fish & Wildlife Service intending to delist gray wolves?

Wolves like whales, dolphins and humans are sentient, highly social animals. Central to wolves, just like humans, are their family units, which work in concert very efficiently.

Delisting the gray wolf from the Endangered Species Act will result in a free-for-all massacre. This will immediately destroy their family units, and without family -- the wolves will perish, quickly.

The Mexican gray wolf of the southwest is the rarest wolf in the U.S., and although the 75 or so known critters will not be delisted, they will be thrust inadvertently into the fray and sure as the day is long -- "accidentally" killed.

We have until December 17, 2013 to unite and tell the Obama Administration not to delist gray wolves. Please take a moment and make a difference by signing this petition and saying NO.

'The War Against Nature' is raging around the globe - there is no reason whatsoever to recommence it against the gray wolves.

Wolves help keep our remaining forests intact and vibrant. Our forests absorb carbon dioxide and store it in wood; they give us fresh air, clean water, potent medicines, a vast array of non-timber forest products; and our forests provide exquisite wilderness.

John Muir said it best: "The idea of wilderness needs no defense. It only needs more defenders!"

It's clearly time to end 'The War Against Nature.' Wolves are the protectors of wilderness -- and wilderness is our salvation!

Earth Dr Reese Halter is a broadcaster, biologist, educator and author of The Insatiable Bark Beetle.