Architects’ Journal has just released the shortlist for their Women in Architecture Awards, which aim to raise the profile of women architects in a sector where women still face an alarming degree of discrimination.

Christine Murray, Editor of Architects’ Journal, commented: “I’m delighted to announce this year's shortlist, which includes the women behind the celebrated Library of Birmingham, the new Stonehenge development and the Giant's Causeway visitor centre. The awards celebrate design excellence and leadership -- qualities needed to succeed as an architect -- and especially among women, who are under-represented in the construction industry.”

2014 Woman Architect of the Year Shortlist:

1. Yvonne Farrell, Grafton Architects 2. Shelley McNamara, Grafton ArchitectsCo-founders of the successful women-led Irish practice, who were shortlisted for the 2013 Stirling Prize with their University of Limerick campus, and are currently exhibiting in the Sensing Spaces show at the Royal Academy.

3. Roisin Heneghan, Heneghan Peng Co-founder of the practice behind the Giant’s Causeway visitor centre (shortlisted for the 2013 Stirling Prize), Heneghan is currently overseeing the Grand Egyptian Museum in Giza and the Palestinian Museum in Birzeit. 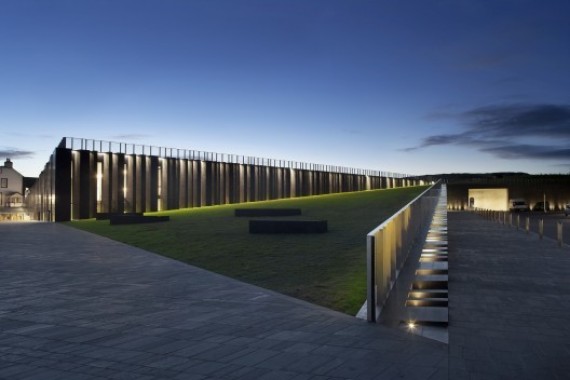 4. Francine Houben, Mecanoo The woman behind the £188.8 million Library of Birmingham, Houben founded Mecanoo in 1984.

6. Kirsten Lees, partner, Grimshaw Lees is behind much of Grimshaw’s work in the sports sector, developing a Wimbledon master plan. Work also includes a new contemporary art gallery in Istanbul.

7. Sadie Morgan, dRMM Only the fourth woman to be elected president of the prestigious Architectural Association's architecture school, Morgan is co-founder of the successful practice dRMM, most famous for their Stirling-Prize shortlisted 2010 Clapham Manor Primary School. She is currently at work on residential projects for both the Elephant and Castle, and Battersea Power Station redevelopment.

8. Adriana Natcheva, Groves Natcheva Architects Adriana co-founded her practice in 2000, and projects include a head office in Brazil, and 15 residential developments across London.

1. Hannah Corlett, Assemblage Co-founder of a young practice (founded in 2003) which won the competition for the new $1 billion Iraqi parliament building, Corlett also won the campus for the University of Qatar engineering department and a competition for 15ha settlement in Iraq.

2. Angela Dapper, Denton Corker Marshall The woman behind the Stonehenge Visitor Centre, Dapper has led its design since it began in January 2009. Current projects also include the Mandarin Oriental Hotel in Hyde Park.

4. Julia King Working on urban development projects between the UK and New Delhi, King designed and built a sewer for 322 low-income houses in New Delhi. She also designed prototype houses and water kiosks for a Savda Gherra resettlement colony.

5. Hana Loftus, HAT Projects Loftus is co-founder of the practice behind the £3.5 million Jerwood Gallery in Hastings, and temporary structures for the reopening of the Olympic Park.

7. Aranta Ozeata Cortazar, TallerDE2 architects With projects in Germany, Spain, Italy and the UK, Aranta co-founded the practice in 2007 while still a student. Its first built project, a child minding centre, won the International Bauwelt Prize. Other projects include experimental housing in Selb, Bavaria

8. Nicola Rutt, HawkinsBrown A partner at the large practice HawkinsBrown, Rutt is currently leading the design team on the redevelopment of the International Broadcast Centre at the Olympic Park for iCITY. She is also behind the transformation of a Grade-II listed warehouse into an office for MTV in Camden.

Winners will be announced at the Awards ceremony on February 7th.

AJ Releases Shortlist for 2014 Woman Architect of the Year originally appeared on ArchDaily, the most visited architecture website on 10 Jan 2014.