A beauty blogger from Grand Junction, Colorado, known as Cailey Darling posted a photo of herself on Instagram rocking a swimsuit from GabiFresh's Swim Sexy collection on May 18 and quickly heard from trolls who felt the need to comment on her appearance. The next day, Darling responded with another swimsuit photo and an important message for the body-shamers.

"Once I started actively trying not to judge others based on appearances, I slowly started to see beauty in the people around me," she wrote. "Soon enough, I could look at a body like mine and see beauty where society told me I wouldn't find it."

Once I started actively trying not to judge others based on appearances, I slowly started to see beauty in the people around me. Soon enough, I could look at a body like mine and see beauty where society told me I wouldn't find it. It took a long time to apply those concepts to my own body. It started with letting go of judgement of others. I hope you notice in my arguments that I try very hard not to bring appearances into an argument because I believe if you're making fun of someone's weight, clothes, teeth, makeup, hair, etc., then you have run out of material and you do not have anything to argue about anymore. If you're bringing someone down for appearances during an argument, then you've lost the argument. To put it plainly, I do not condone any body shaming at all, ever, even if it is to defend me. If you shame someone's appearance in response to them shaming mine, then you're not on my side. That isn't to say I don't defend myself. I do. I will continue to do so, because I learned to defend myself in real life by watching other fat women stand up for themselves in arguments online. It seems small, but I've gotten dozens of messages thanking me for actually responding because it helps them learn to defend themselves against their own bullying. I will attack their logic, opinions, poopy personality, rudeness, nastiness, self-loathing, or hatred, but never their appearance. I am here to change minds about bodies, not to shame any other types of bodies.

The day after that, she posted yet another swimsuit photo and wrote that hateful comments won't keep her from living her life "unapologetically." Darling told The Huffington Post she decided to respond to the trolls with a series of swimsuit photos to show that their hateful words won't affect her and that she has no plans of backing down.

"I want people to see me still standing and believing I am beautiful even though people tell me I'm not," she said.

In one of her captions, Darling noted that she sometimes directly responds to people who leave hateful feedback on her photos. She clarified to HuffPost that she responds to the positive and uplifting comments more often, but that she does choose to interact with some trolls. She said she learned from other women who defended themselves online and now wants to help inspire others to stand strong as well.

"I get messages all the time from people who thank me for responding to troll comments because they never knew how to stand up for themselves in that situation, and now they have a good idea of what to say when faced with bullying," she said.

lumps on lumps on lumps. The @gabifresh X @swimsuitsforall The Sovereign Suit. ✨👙✨👙✨👙✨👙✨👙✨ 👙✨👙✨👙✨👙✨. I hope seeing someone fat and happy and still standing after hundreds of hateful comments and messages can help someone in their own journey to loving themselves and shedding other people's opinions of them. 🔹🔹🔹 Trolls can go ahead and see I've posted myself in this suit three times before and your hatred for my body or my health for whatever reason will not keep me from posting, wearing the suit, eating, or living my life unapologetically so your comment does nothing but waste your time. I mean go ahead and make fun of me though, because I am sure if instagram had a cap on how many people you can block, I would have met it by now.

"I am here to change minds about bodies, not to shame any other types of bodies," she wrote. 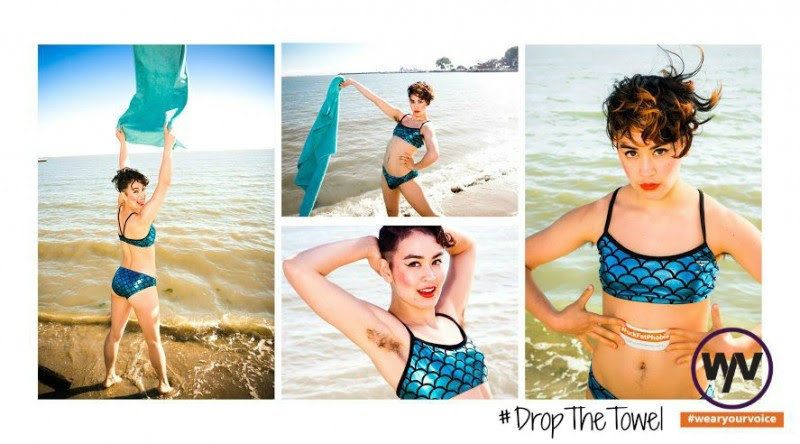