Hundreds of pigs are crammed into a truck on a sweltering day. They pant and foam at the mouths, desperately thirsty. It is the first time they've smelled fresh air or seen sunlight--and it is the last, because they are about to be killed for meat. Before this, they spent day after week after month in barren, filthy pens, so crowded that they were climbing on top of each other.

A woman appears with a bottle of water. She pours water into the animals' mouths and talks softly to them, offering a moment of solace before their harrowing journey ends in death. The driver gets out of the truck, tells her to stop, and threatens to slap the bottle out of her hand.

Thankfully, the criminal responsible for this atrocity was arrested.

No, not the truck driver. 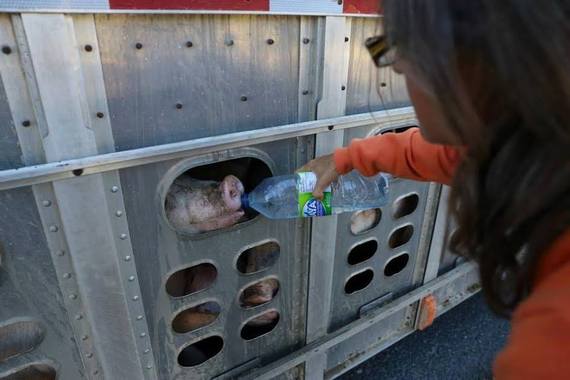 The woman with the bottle of water has been charged with mischief. Her act of compassion towards animals who had likely never known human kindness is considered criminal, rather than heroic, by our justice system.

The woman's name is Anita Kranjc, and she's no stranger to the outside of transport trucks. For years she has been leading groups of concerned citizens in bearing witness to these doomed animals, offering a sip of water or a piece of watermelon so that their miserable lives may know a reprieve of kindness. Many times, law enforcement has been present, with no issues.

This time was different. The outraged driver called local police, filing a complaint against Anita. He was furious that he had told Anita to stop giving the pigs water, and she had not complied, instead begging him to have some compassion.

Anita has been charged with criminal mischief, for rendering someone else's property "dangerous, useless, inoperative or ineffective." Mischief is typically charged when someone has vandalized, broken, or otherwise damaged someone's property.

In this case, the property is the pigs. In the eyes of the law, they are a commodity, and their owner's rights are supreme.

True, the liquid might have been something other than water. But the point is that it wasn't. Someone might be handing out poisoned sandwiches to homeless people, but unless the sandwiches are in fact poisoned, the person isn't arrested on a just-in-case rationale. On the contrary: we recognize giving food to the hungry as an act of kindness towards someone in need.

Federal law allows pigs to be transported for up to 36 hours without food, water or rest. That probably explains why the pigs were desperate for water--imagine being in a crowded, metal truck on a hot day for many hours?

At least there is a federal law governing transport. The government doesn't even regulate on-farm conditions, choosing instead to fund and endorse industry-created codes of practice. In other words, the government lets the industry make up its own rules about animal welfare.

The result is that life leading up to transport is just as crowded, filthy, and deprived as that glimpsed through the air holes of a truck. It just takes place in windowless warehouses on private property, where there is no one like Anita around to interfere by showing mercy.