A Pennsylvania community is rallying around a woman who was fired from her job at an oral surgeon's office following her diagnosis with cancer.

Carol Jumper, who lives in Hopewell Township, Pennsylvania, was diagnosed with cancer impacting her pancreas, liver and ovaries in August. According to her fiance, Dennis Smerigan, Jumper received a letter from her boss, Dr. George Visnich, in which the oral surgeon said he was laying her off without compensation. Raging Chicken Press published the letter on Sunday.

"The symptoms of the disease, the pain medications you will need and the side effects of the chemotherapy will be significant and distracting,” reads the handwritten note, which bears Visnich's letterhead. "You will not be able to function in my office at the level required while battling for your life. Because of this, I am laying you off without pay as of August 11, 2014."

The letter continues, "Our thoughts and prayers are with you as you fight this horrible disease. Thanks for your time at Visnich Oral Surgery. I hope your battle is swift, smooth, and successful!" 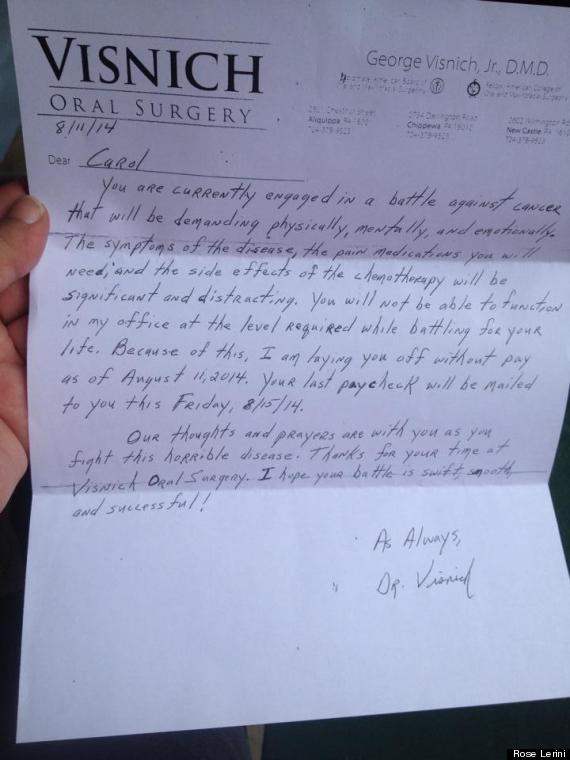 Smerigan told the Beaver Countian that his fiancee worked for Visnich for more than 12 years.

"He didn’t even call her, he hasn’t even called her once since she got sick," Smerigan said.

Visnich's office did not respond to multiple requests for comment by The Huffington Post. However, Larry Kelly, an attorney for Visnich, told the Beaver County Times that the doctor laid off Jumper so that she could claim unemployment benefits, describing the dismissal as a "humanitarian thing."

"He’s trying to help this woman and he’s made out to be a villain," Kelly said, claiming that his client wrote the letter “with the understanding that when she is feeling better, she can come back to work.”

Current and recovering cancer patients are protected against job discrimination under the Americans with Disabilities Act so long as the individual is able to perform the job's essential functions.

Visnich's letter went viral in the area after one of Jumper's friends posted it on her Facebook page. Since then, community members have organized a number of fundraisers on behalf of Jumper, and formed a "Bumpers Buddies" Facebook page to rally support.

“She’s a good lady, and we’re just doing what we can to help her out,” John Barkovich, a friend of Jumper's, said.