It's a god-awful small affair, to the girl who's not even there.

A photo from the Mars Curiosity rover posted to NASA's Jet Propulsion Laboratory website has the Internet buzzing about the so-called "woman" on the Red Planet.

But if there is life on Mars, this image isn't evidence of it, one expert tells The Huffington Post. Dr. Seth Shostak, senior astronomer and director of the Center for SETI Research, thinks that it's all in the eyes -- or, brain, rather -- of the beholder.

"The fact that so many people are adept at playing 'Where’s Waldo?' with rover photos is a testament to our brain’s ability to pick out creatures in the visual landscape," he told HuffPost. "It’s a talent that helped our ancestors avoid predators or catch prey, but it’s a poor strategy in the hunt for extraterrestrial life."

Yes, the human brain is hard-wired to look for patterns, meaning and even faces in images. It's a phenomenon called pareidolia.

Although it's hard to tell exactly what the first (second?) lady of Mars is made of without examining it, Shostak says that it's probably a rock. (Hey, it could have been dust or dirt.)

"I know that this may disappoint those who are convinced otherwise, but just because it looks like a duck is hardly proof of ducky-ness -- or in this case, evidence that a miniature version of the Statue of Liberty is welcoming NASA hardware to Mars," Shostak said.

Here's a bunch of other cool-looking Mars rocks: 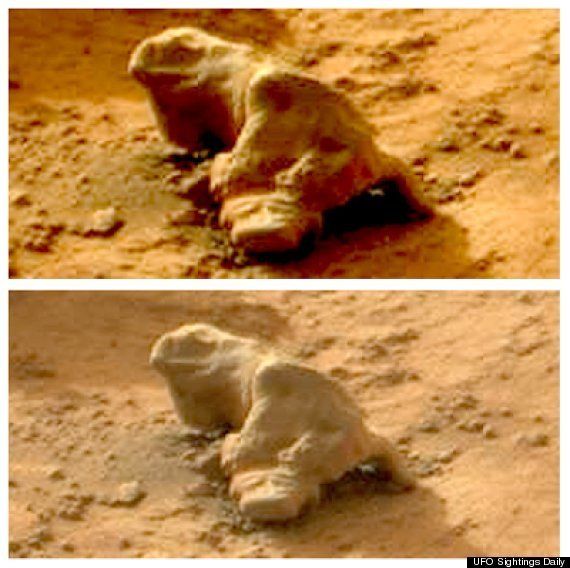