In the market for slightly used lingerie purchased originally by a middle-aged married man for a 25-year-old he wanted to sleep with? How weird, you just missed that sale on eBay!

In a recent 500-word eBay listing, mom of three Sandra von Riekhoff offered up quite the backstory for the purple Agent Provocateur corset she was selling: The lingerie was purchased 15 years ago by a 40-year-old married man who wanted to make her his mistress.

"I have only worn it while drunk. It looks ridiculous otherwise," von Riekhoff wrote in the ad. "Try standing with it on, flat foot in broad daylight. It appears desperate."

Why unload such a gem after all this time? Outside of feeling guilty over taking it to begin with, von Riekhoff told the Huffington Post the teddy was simply not worth keeping around anymore.

"In this age of waste not, want not -- and as an almost 40-year-old old mother of three -- the lingerie was gathering dust," she said.

Read the listing in all its glory below. 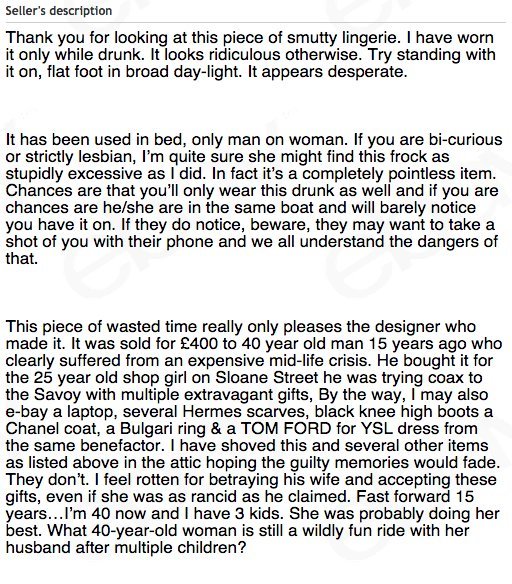 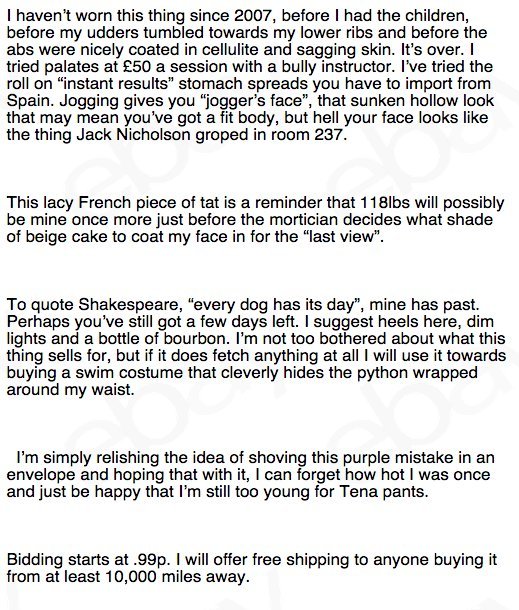 The corset ending up selling for 17 pounds (roughly $25 U.S.). Von Riekhoff said she wishes the buyer all the best.

"I hope she or he enjoys it while they can. Time is ticking!" she told The Huffington Post.

And if you're bummed you missed the sale, don't fret -- there's more where it came from. Von Riekhoff is now auctioning off a vintage Hérmes scarf the married man bought for her. (The receipt for the scarf was what tipped the wife off about her husband's shady behavior.) All proceeds from the scarf will go to Sal's Shoes, a charitable organization that collects and redistributes outgrown children's shoes to kids in need.