Police in Guapiles, Costa Rica, are stumped at how a woman was able to steal a plasma TV set by sticking it up her skirt.

The shocking theft occurred two months ago, but is being made public in hopes of finding the robber, ABC Chicago reports.

Surveillance video shows two unidentified females walking into an unnamed store. One of the women is wearing a flowing skirt and somehow is able to tuck a flat screen television between her legs.

Even more amazing is her ability to walk out of the store with the TV without being caught red-handed or red-legged.

Local police have theories about how the robbery happened, but no leads to suspects.

"We believe this woman has had a lot of experience of doing this as it only took her 13 seconds from start to finish," a spokesman for the Guapiles Police Dept. said according to the Mirror. "Either she has been practicing at home or has carried out similar thefts and we appeal to anybody who might know more to get in touch."

The TV was snatched two months ago, but store assistant Jacint Ramirez Callas is still shocked by the video.

"She did it so quickly no one had time to notice or react, and having watched the video it is amazing that the TV doesn’t fall out from between her legs," Callas said, according to the Daily Mail. "She must be a pro or have very thick thighs. She left as if she didn't have a care in the world. I’ve never seen anything like it."

The Guapiles Police Department asks anyone with information on the theft to contact them. 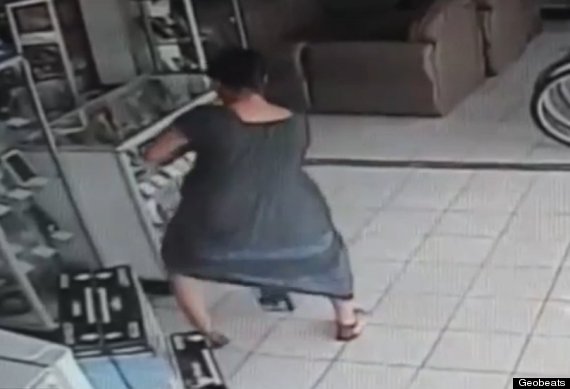 Woman Snatches TV By Putting It Up Her Skirt (VIDEO)
Caught On Camera
1 / 11
Vince Neil Tries To Punch Fan At Concert, Misses Badly
Motley Crue frontman Vince Neil became aggravated by a fan in the front row at his concert in New Mexico on Dec. 7, 2012, and tried to punch him -- but he missed.
CelebrityStalk