One surefire way to not pick up a lady: Tell her she needs to lose weight.

On June 3, marketing director and fashion blogger Christina Topacio took to Twitter to share an offensive and sexist text message conversation she had with a guy she had never actually met in real life.

The audacious dude told Topacio that while he would "seriously consider dating" her and "getting to know" her, he thinks she needs to change a few things. This unsolicited advice was not necessary (to say the least).

"It fucking kills me to say this… And it’s nothing you don’t already know," the guy wrote in a text to Topacio. "And I’m positive you’ve thought about it. And I’m only telling you this because I want it to effect a change. You need to fucking lose weight. It kills me.”

Topacio told The Huffington Post that she met the guy on a dating site where they exchanged numbers, however, they had never hung out in person.

She tweeted screenshots of the entire text message conversation yesterday to her 8,500 followers, receiving over 2,500 retweets. Check out the cringeworthy exchange below:

So this just happened. I've never met this man in person but he sure felt comfortable enough to share. #itkillsme pic.twitter.com/OzUutmprX3

"My first reaction was, literally, 'Wait, what?!'" Topacio told HuffPost. "Then, I got sad. Like, this person has never seen me in real life. I was baffled."

She said that she shared the conversation on social media to empower women to stand up for themselves. "My goal is to encourage girls to not only brush it off, despite how hurtful it is, and to laugh it away," she said. "I want women to feel empowered to stand up for themselves, own who they are and understand that someone else's opinion has no relation to them being an amazing person."

"My story is not a new story, this happens to women constantly," she added. "I'm just happy to have been given an opportunity to share my personal experience in hopes that it empowers women to shut it down. And ultimately say... I'm beautiful, I'm strong, I'm powerful, I'm 100 percent me." 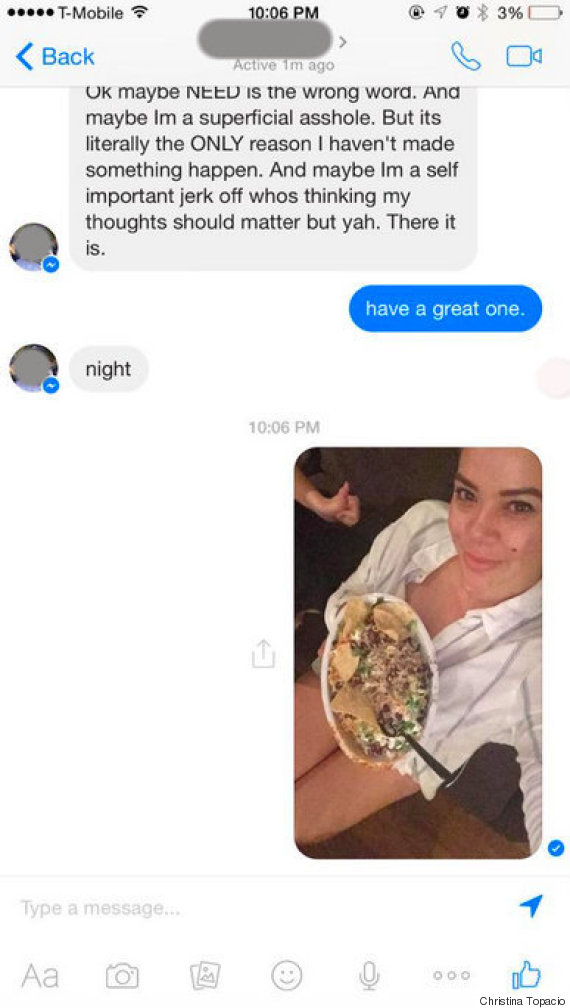 Go on with your beautiful, strong and powerful self, Christina.