Know any dudes who just don't understand feminism? Send them a handy link to The Womansplainer.

The Womansplainer, as its homepage describes, provides "consulting for men who have better things to do than educate themselves about feminism," offering services to Twitter trolls and men's rights activists alike. Clueless patrons can pay between $20 and $100 for Simins to answer certain questions by choosing from a drop-down bar of options including "Are all feminists lesbians?" and "Do feminists hate sex/humor/fun?" The price depends on how deep you're willing to go -- will a quick Google response satisfy you, or do you need an in-depth Twitter conversation? 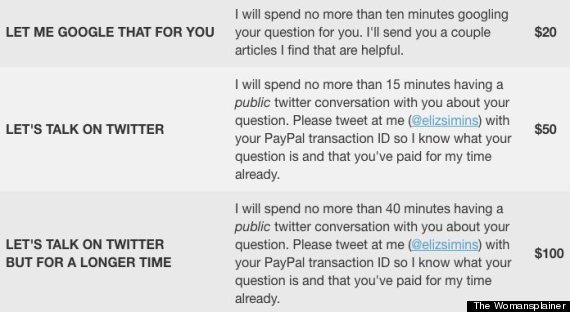 "I wanted to make people think about what men are really asking for when they ask women questions about feminism that they could easily research the answers to themselves, which happens CEASELESSLY to most women who are vocal on social media," Simins told The Huffington Post in an email. "When they get angry at women for not immediately taking time out of their day to educate them, what they're saying is: 'My time is worth more than yours.' But it isn't."

Simins reports that the response has been overwhelmingly positive, and that most people appreciate the humor and get the message.

"I've even had other women ask if they could franchise the business -- and to that I will ALWAYS say yes, because that's the point!" She told HuffPost. "Our time is valuable, and we shouldn't be expected to treat it otherwise."