Women are known to have a significantly higher risk than men of experiencing an ACL (anterior cruciate ligament) tear in the knee, and a new study may have pinpointed a potential reason for why: They tend to land "knock-kneed" after coming down from a jump.

Researchers found that even though men and women both landed stiffly from a jump -- where the quads are tensed, which is already a risk factor for ACL tear -- women had a 3.6-fold increased risk of landing "knock-kneed" compared with men. 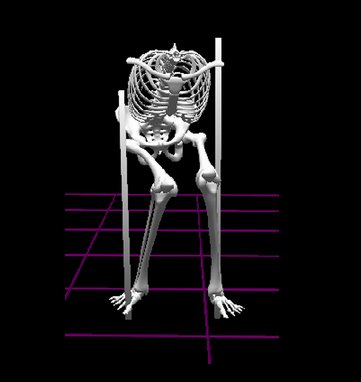 Model of a female landing "knock-kneed" from a jump. Image courtesy of Marc Norcross.

"You see ACL injuries in any sport where you have a lot of jump stops and cuts, so basketball, soccer, lacrosse, and volleyball are high-risk sports," study researcher Marc Norcross, of Oregon State University, said in a statement. "We know that people who hurt themselves tend to look stiff when they land and that the combined 'knee loading' from multiple directions is likely causing the injury event. But it wasn't clear initially why women had more injuries than men."

The findings, detailed in two studies in the Journal of Athletic Training, are based on motion analysis of 82 men and women who are physically active.

"We found that both men and women seem to be using their quad region the same, so that couldn't explain why females are more at risk," study researcher Marc Norcross, of Oregon State University, said in a statement. "Using motion analysis, we were able to pinpoint that this inability to control the frontal-plane knee loading -- basically stress on the knee from landing in a knock-kneed position -- as a factor more common in women."

While more research is needed to determine why exactly women are more likely to land from a jump in this way, Norcross mentioned that it may have something to do with the way females are physiologically built, as they tend to have wider hips than men, which could affect the way their knees might be affected by a jump landing.