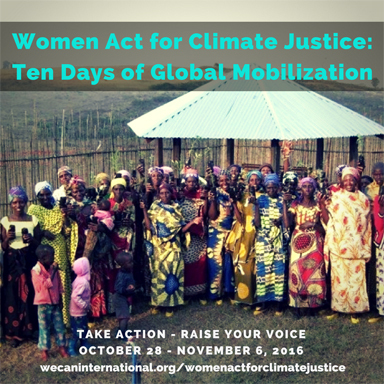 Around the world, a vibrant and active grassroots movement is demanding a place at the environmental table for the intersecting concerns of women's rights, Indigenous rights, and climate justice.

Women's Earth and Climate Action Network, International (WECAN) is spearheading Ten Days of Global Mobilization, from October 28 through November 6. The goal is to bring visibility to the environmental challenges affecting girls and women throughout the world, and to highlight how global action is shifting the equation. This designated time period will shine a light on self-organized actions, as well as exhibit implemented solutions.

Organizers of the initiative have put out a call for women and girls to send in photos and statements, or to participate in escalated actions "including but not limited to educational events, community projects, protests and marches."

I spoke with Natalie Cronin, featured in the WECAN's Mobilization Action Gallery. Natalie is a daycare provider, child advocate, climate activist and a Moms Clean Air Force Supermom. She was present at the demonstration in front of Senator Chuck Schumer's office in Manhattan on October 26. The objective was to pressure Sen. Schumer on the Spectra AIM pipeline, a project that would place a pipeline within one hundred feet of the antiquated Indian Point nuclear power facilities.

The mother of two, Natalie related how she found herself becoming increasingly upset when she was pregnant about issues impacting the environment. "I want to fight because it's a way to push back against despair," she said.

Natalie was arrested in May during an action in Peekskill, protesting Spectra. "I'm fighting for our children's future," Natalie emphasized. "At the end of the day, it's going to take bodies on the line -- but in the end, we will get it done."

Living in New York City doesn't preclude Natalie from seeing the big picture. If anything, it has informed her activism. "All of our grievances are connected," she said. Her specific advice to women who come from a privileged situation was, "Take part in real advocacy. Activism is available to everyone. We need to vocalize about everybody's children."

Women in developing countries confronted by climate disruption face additional obstacles in their efforts to produce food and collect water. In the United States, low-income communities and people of color have been disproportionately impacted by toxic sitings.

Currently, the voices of American Indigenous activists are finally getting heard. They have been instrumental in bringing visibility to the fight against pipeline expansion.

Since April of this year, members of the Standing Rock Sioux tribe have pushed back against the violation of their lands, water, and ceremonial locations -- all challenged by the pursuit of the Dakota Access Pipeline. The pipeline project, as designed, would pass under Lake Oahe and the Missouri River, a key source of the tribe's drinking water. The path of the pipeline is almost fifty percent completed and would cross four states.

Every day the situation escalates, as militarized police in riot gear clash with demonstrators specifically trained in "peaceful resistance."

WECAN has been at the forefront of connecting the dots between women climate activists around the world. Here's how you can help.

Fight for the Environment!