The quote -- "Give a man a fish, he'll eat for a day. Give a woman micro-credit, she, her husband, her children and her extended family will eat for a lifetime" -- has been attributed to Bono, the humanitarian and rock star of U2 fame.

Micro-credit programs, which encourage entrepreneurship through small loans, empower women and girls. Nobel Peace Prize winner, Muhammad Yunus, spearheaded the modern concept of micro credit. Yunus' organization Grameen Bank, found that concentrating on loaning to women ultimately brought more benefits to the entire family. Poor women tend to reinvest into their households and extended families, men often spend excess cash on vanity items for themselves. When a woman obtains a micro-credit loan it can be a key step in moving her entire family away from the persistent vulnerabilities of the poverty cycle. There is an undeniable link between the transmission of HIV and poverty. Micro-credit in the hands of women fosters an environment of education and entrepreneurship, which is necessary in the fight against HIV/AIDS.

Last Friday, At World Vision's 7th Annual Women's Call to Prayer and Action Breakfast in recognition of World AIDS Day, I had the opportunity to experience the power of micro-credit for myself. Held at New York City's Metropolitan Club, the event brought together women (and a few men) who are committed to addressing key underlying issues in the fight against HIV/AIDS like poverty, women's empowerment and gender-based violence.

During the breakfast each table took part in a role-play that mirrored the experiences of women in a World Vision 'Savings Group' in Zambia. I was assigned the role of Patricia, a 33-year-old mother of six who happened to be the group's treasurer. True to my personality, I was happy to have a leadership position, even in a completely fictional scenario. I collected dues from our mock savings group and dolled out loans for a home-based muffin shop and a peanut butter business. The role-play exercise helped to cement the fact that the breakfast is more than just another annual event on the social calendar. It is an opportunity to connect with others who are genuinely interested in empowering women and girls domestically and internationally. 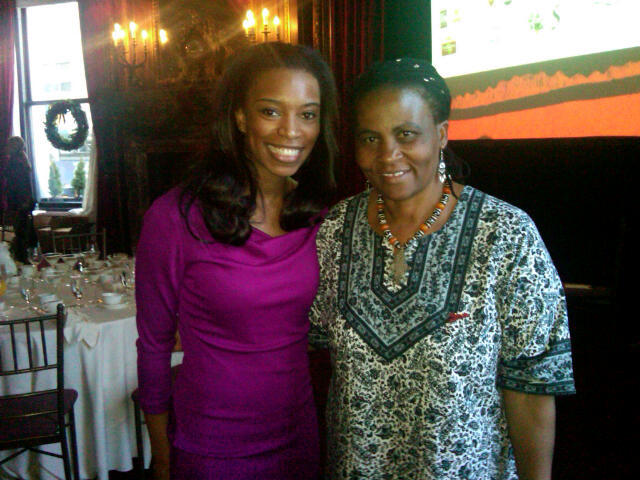 The event recognized several dynamic and notable women such as keynote speaker, model and author, Kim Alexis. For me, the most memorable part of the morning was meeting Dr. Tererai Trent who was honored along with Dr. Musimbi Kanyoro, CEO of the Global Fund for Women. I first read about Dr. Trent in the book Half the Sky. Trent, a native of Zimbabwe received little formal education as a child. She taught herself to read using her brother's schoolbooks and began doing his homework assignments nightly. Her brother's teacher eventually recognized a disconnect between his lack-luster in class performance and the high quality home work assignments that Terarai was actually completing. Through the support of Heifer International Dr. Trent came to the U.S. to complete her bachelor's degree, Master's and finally her Ph.D. She did all of this while raising five children and surviving a physically abusive relationship with her former husband. In May, Oprah Winfrey recognized Dr. Trent as her all time favorite guest, an honor in an of it self that was sweetened with a $1.5 million grant, which Trent is using to build a school in Zimbabwe.

Following the program I did a little shopping and supported a few good causes at the marketplace that was assembled right outside of the breakfast. I was very excited to see Nomi Network, a social business that I profiled in my thesis project last year. Nomi Network markets and distributes handbags that are made by women who are at risk, or are survivors of sex trafficking. Incorporated in 2009 Nomi Network connects fashionable consumers with altruistic products. Their slogan is "Buy Her Bag, Not Her Body."

If the global community truly believes that poverty and HIV/AIDS are unacceptable we can take steps to significantly stifle, if not eradicate both. "I know that women in Africa and women all over are resilient people. All they need is an opportunity. It's now up to us to give them the opportunity," said Dr. Trent when I spoke to her after the event. Access to micro credit programs provide an opportunity for poor women to make productive decisions and regain control of their destinies.