The day after Inauguration, 3.5 million women and men marched to protest the Trump administration's vows to defund Planned Parenthood and revert abortion from a woman's right to a crime. Conspicuously missing in this largest protest march in our nation's history were the anti-abortion women, most of them white Christian evangelicals, who by 80 percent voted for Trump and his promise to overturn Roe vs. Wade. 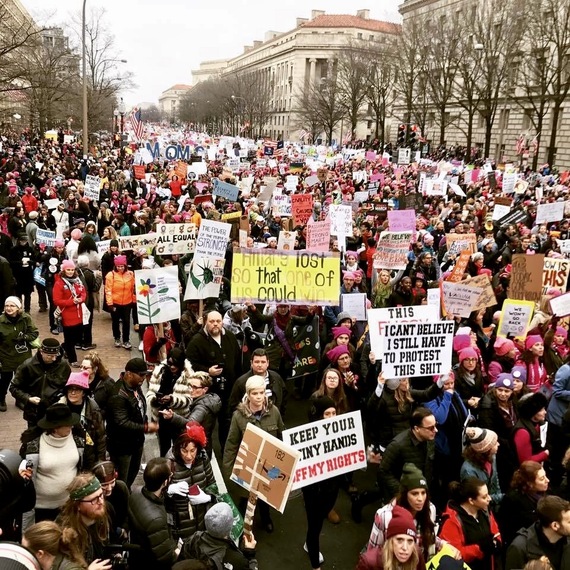 To understand these anti-abortion women is to realize that for them abortion is religiously driven. It is about pleasing a patriarchal God--the Old Testament God the Father. He has no mate, no God the Mother, and no divine daughters. This male god created man first, then birthed a woman from his own body. This Christian creation story is biologically backwards. It steals the spiritual power of birth and creation from the woman and gives it to the man. That is the patriarchy of the Religious Right. And that is where our country finds itself--in its last brutal grasp of male political and religious power--perfectly embodied by a president whose "grab for pussy" is also a power grab.

Compare Obama's devotion and credit to his mother's influence with Trump's practically invisible mother. His daughter, Ivanka, while pretending to care for women, perpetuates the patriarchy of God the Father. If she claimed any of her own feminine power, she would have influenced her father's cabinet choices-- dominated by old, white, rich males, the most patriarchal cabinet since Reagan. She would have advised against Trump signing away reproductive health funding to women in developing countries. 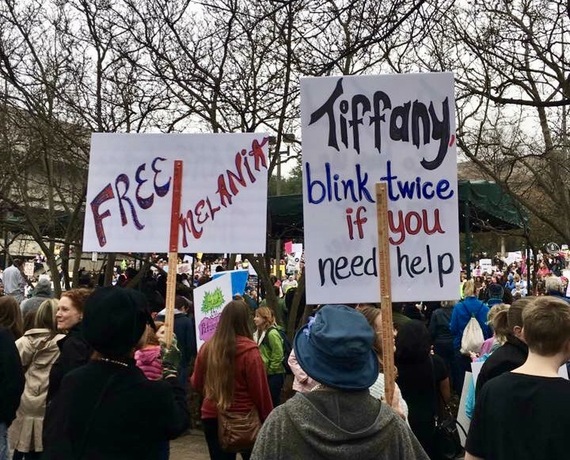 But abortion is not just about women claiming their feminine power; it is also a spiritual issue, with two sides who do not speak the same language. How can a woman who carries a sign "Jesus Hears Their Tiny Screams" converse with another whose sign states: "Abortion: Every Woman's Birthright!" It's like a screaming match between two tribes who offend each other simply because they occupy the same territory--in this case, a woman's body.

We have to go back to pre-patriarchal history to discover a well-documented body of scholarship on the ancient cultures, whose spiritual life was centered in the rites of biological motherhood and the Earth as feminine Goddess--Gaia, as the Greeks named her. Archaeologist Marija Gimbutas calls this the "Goddess or Great Mother cultures" in prehistoric European civilizations. Gimbutas writes: "There are no depictions of arms (weapons used against other humans) in any Paleolithic cave paintings." Richard Leakey's research also defines early humans of several million years ago as peaceful and cooperative. These cultures are noted for their flexibility, their egalitarianism, the strong bonds between mothers and children. This was our way of life until around 3000 b.c., when the advent of the Bronze Age and the warrior tribes produced weapons and a vengeance-seeking God the Father who denied and disappeared the feminine balance of God the Mother.

I well remember a hymn, "Power in the Blood," from my Southern Baptist childhood--a soundtrack to this warrior god's war on women.

Would you be free from your burden of sin?
There's power, power, wonder-working power
In the precious blood of the Lamb

The power in these blood rites has to do with sacrifice of the divine son, the Lamb. But what about the spiritual authority in women's blood and sacrifice? Before blood and power and sacrifice were united in the masculine art of warfare, they were synonymous in these Great Mother cultures with women's blood--and not just the blood of birth, but also the blood of sacrifice. The power of birth and death belonged first to the woman. Just as the first way we told time was by women's cycles: twenty-eight days between menstruations, twenty-eight days of the Moon's cycle. The Moon was said herself to be "menstruating" as she fulfilled her fertile course, from waxing fullness to waning death to rebirth. Everything was in relationship to the circle, the whole. And in the center of this cycle were the Great Mother deities in reverence and sync with the Earth's seasons.

In those days it was not Jehovah, but the Great Mother who "giveth and taketh away" and whose name was nevertheless blessed. The root meaning of the word ritu or ritual is "menstruation." For our ancestors, crossing the threshold from girlhood to womanhood was dramatic and awe-inspiring. The wonder of it all: a body bleeds, cleanses, and is reborn. A body does not bleed for nine full moons and so gives birth to another body. How powerful and mysterious, then, this women's blood. No wonder this blood was saved, used to fertilize crops, and precious drops offered in only the most sacred ceremonies.

The Old Testament lamb that was later ritually sacrificed was an imitation of these menstrual rites. Jehovah borrowed power from the feminine blood to make His own ceremonies. The blessing and power of those early Great Mother cultures' blood became the feminine "curse" and transmuted into the masculine warfare (blood-shedding) myths of the Old Testament. Whereas the New Testament Christ is more feminine--virginal, non-violent, and compassionate. 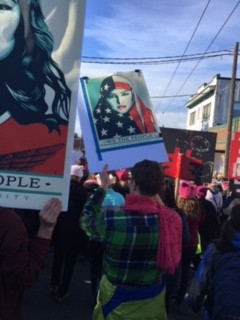 The anti-abortion movement is anchored in this Old Testament's patriarchal denial of a woman's power. It's even in our language. The word hysteria has its root in the word womb; the word testament in the word testicle, or "male witness." Hysteria is now used by psychology to describe feminine dysfunction; testament is considered a sacred covenant "between God and man." Thus, the testicles can tell the truth; the womb lies. If a woman's womb lies and she is hysterical, isn't it then assumed that she can no more judge who lives and who dies, who has the power to "giveth and taketh away?"

"Don't give up your power!" shouted actor Scarlett Johansson at the Women's March in Washington D. C. We will act together and resist the patriarchy's attempts to steal away our spiritual, political, and physical authority. Biology will out: Men do not give birth. Women do. You can bet that if men were the ones to give birth, abortion would not only be a law, but a sacred right, a sacrament granted by God the Father.

Three times as many of us marched for women's rights as attended the regressive God-the-Father Inauguration. By these overwhelming numbers, the feminine will finally overcome the patriarchy and give birth to the future. That is wonder-working, feminine power.

Brenda Peterson is a novelist and nature writer, author of 20 books, including Your Life is a Book, selected by Oprah.com and the memoir, I Want to Be Left Behind, an Indie Next, "Great Read" chosen by independent bookstores. For more: www.BrendaPetersonBooks.com