Fresh out of college, Kate Sheehan worked for several Fortune 500 companies in New York City, eventually zeroing in on corporate communications. At 27, she became the speech writer for the CEO of one the largest financial services firms in the world. But less than a decade later, Kate, now 34, finally paused and asked herself if she was getting true joy from her work. Here, as part of our new series on young women who left their stressful paths behind, Kate tells us how the answer led her to make what she calls the scariest but most empowering choice of her life.

It was a very demanding job, and the expectations were intense. I enjoyed that in a lot of ways -- I was really excited to have this huge opportunity, to work for and learn from the CEO directly -- but I was easily pulling 12 to 14-hour days. I found it really difficult to date or maintain friendships or make any time for myself. But because I was so young, I felt, "I have to keep charging."

After a few years, the CEO retired. I wanted to try something new, but I did not know if it would be OK to stop and take a deep breath. I was so young to have had the kind of experience and exposure I had amassed at that point. I was afraid -- panicked -- that if I stepped back or reevaluated what I really wanted, I would lose opportunities.

I spent the next three years trying to [talk] myself into enjoying a variety of roles. One of the things that kept me with the company was concern about what it would mean to step back and lose the momentum I'd gained, but it was also that I really loved the people I worked with. And it was still hard for me to answer the question, "What job do you want?" At 30, then 31 years old, and given how hard I had been working, I felt silly not to know my response.

At some point, I just realized [it was] the wrong question. It's not, "What do I want to do?" it's, "What kind of life do I want to have?" In my 20s, I was all about trying to get as far as I could, as fast as I could within a great company. I also wanted to pay off my student loans by the time I was 30, which I did. When I moved into my 30s, I still wanted to work hard, I wanted to learn, I wanted to grow, but I realized how unfulfilled I was. I realized I'd never stopped, not once, and reevaluated my goals. I’d never stopped and said, "Are you on the right path for you?"

I had been thinking for a long time that I wanted to go out on my own, but I wasn't brave enough. I thought I had to have much more experience, better networks … but every part of me emotionally said it was time to move on, even if I didn't necessarily know how I was going to make it work.

I moved back to Cape Cod, [Mass.], where I grew up, temporarily, for family reasons. I was still working remotely for my old company, and I never thought I was going to stay. But three months turned into six months and about nine months in, I decided to stay. I had been dreaming about building a business that supported the life I wanted, and there was something about being on Cape Cod -- I was inspired by the people around me, in this beautiful geography, who were making it work. I started to think, “I could make a more independent path work for me as well.” I felt inspired by the natural surroundings, by being close to the ocean where I grew up. Emotionally, mentally and physically, I had more space to create.

I'm seven months in now. I started a communications consultancy and a local lifestyle guide with two amazing women entrepreneurs I connected with when I came back.

The big difference is the pace. In the corporate world, it's not 9 to 5 anymore, it's more like 7 to 7, and beyond that, you have to be available [on your iPhone or Blackberry] all the time. The business is the priority, and everything else fits in around that -- or it doesn't. Now, I find my days are equally long, but the way I compose them is different. Almost every day includes some sort of physical activity. I actually have time for a dog -- Scout, my rottweiler chow mix -- and I take her for long walks by the ocean. I am also much more involved in my community now than when I lived in New York City. There are these great independent female business owners here, and we support each other. We barter, and we help each other make it work. 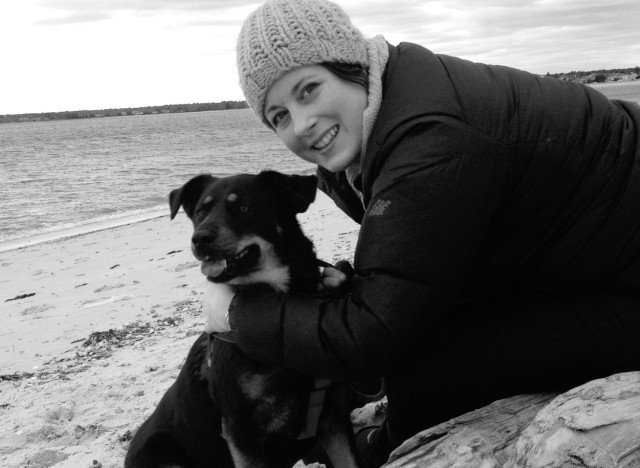 Kate with her dog Scout, whom she regularly takes on long beach walks.

Looking back, I was extremely stressed for the last several years I spent in the corporate world, but I don't think it's fair to say that all of the stress came from the corporation itself. Part of it was being in a very demanding environment, but part of it was the pressure I put on myself to go, go, go. Now, my stresses feel different, because they're stresses of my own, deliberate choosing. I feel financially stressed in a way I didn't a year ago, certainly, but I knew that I was stepping away from a steady paycheck. Dating is harder here than it was in New York City, but for now I feel like building my business is my boyfriend, and my dog is my baby, and that's where I'm really focused for the next year.

I still have moments -- daily! -- where I think, "WHAT. AM. I. DOING? Have I lost my mind?" But I work through those moments. I do that by thinking, "This is a gift to myself." There are a lot of women doing what I'm doing, but they're doing it 15, 20 years later. I don't want to be someone who, 15 years from now, has horrible health problems and who hasn't created a life that feels really meaningful to me.

I suppose walking away from a corporate job may sound like leaning back, but I feel like I'm leaning in -- into my own life, in my own way. 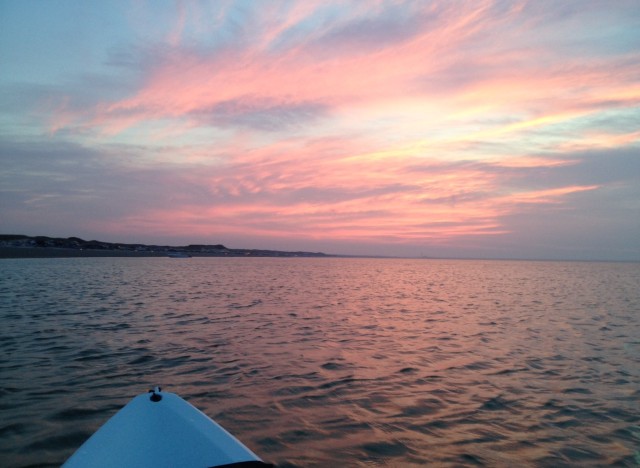 An image Kate took while kayaking on the Cape. She describes this spot at Sandy Neck Beach as one of her favorite places to be.