When I was 14, my mother took me to a dermatologist to have the row of warts on my right middle finger permanently removed. Two treatments were available. The doctor recommended the more costly, which would leave my hand unblemished. The less expensive option, burning the warts with liquid nitrogen, would cause scars.

"Oh, we're not worried about scars," my mother said. "Nancy's hands will be working hands." I'm not sure where she got this idea, especially considering that I spent more time translating Virgil and Plato than wielding a plane or hammer, but we went with the liquid nitrogen. I sometimes wonder whether her words influenced my early decision to become a cabinetmaker.

On the desk in front of me lies a full-page ad cut from my local newspaper, dated December 13, 2009. In it, a slender brunette, apparently in her 20s, wears low-rise jeans, a purple blouse, and a Santa hat. She looks proud of herself. Her right hand perches on her hip, above a tool belt. Her left hand holds a circular saw. Oddly, there is no sign of dust, dirt or other wear on her clothes or work gloves. Cut and pasted below her are three chests of drawers (did she make them?), a camera and several boxes, wrapped and tied with pretty bows. The advertisement is for home equity loans from a local bank.

Also on my desk is a full page-ad from a popular music magazine dated August, 2002. Here, a young woman on her knees reaches into a kitchen base cabinet to repair the plumbing. We see her from behind, her tight white t-shirt pulled above her waist by her stretch. Her jeans have ridden down just far enough to reveal the upper half of her lace thong underwear, where the infamous "plumber's crack" would ordinarily have appeared. "The sink is clogged again," reads the ad for "Doc's" Hard Lemon Malt Beverage. "Now that's refreshing."

In a third example, this time online, the image accompanying a 2010 story about handywomen in Britain's Daily Mail shows only the mid-section of a model-thin woman wearing low-rise jeans, her black t-shirt above her midriff, toolbelt slung around her waist. Again, no sign of dirt or wear on her body or her clothes, yet she stands in that confident pose, hand on hip.

"I totally agree with Lesley in Cardiff and Emma in London," writes Anne from Gloucester, one of those who commented on the story. "It is just so disappointing in this day and age that no matter what women do for a living, a sexual image to titilate [sic.] men has to be attached to it. Surely ... someone out there can think outside the box and come up with something better than this insulting, sexist rubbish. I mean, really. How difficult is it." [sic.]

To be sure, these ads, particularly the last two, are world-class examples of sexism. But that's not their only insult. Depicting tradeswomen on the job with immaculate clothes and perfect hair, lacking any sign of calloused skin or wrinkles, denies the very reality of work. Rather, it presents the idea of work as a kind of fashion accessory for these women, an occasion for dressing up. Sexy babes meet The Village People.

And how about that ageism? Where are the lifelong role models for girls who may be considering the trades or other manual work? As a tomboy in my 20s I paid scant attention to my looks, comfortably insulated by my youth from any negative judgment that might accrue from my lack of concern with norms of femininity. In my 30s, I began to realize that those carefree days were waning. Though I still felt unabashed wearing glue-spattered t-shirts and cut-off jeans in public, I was beginning to wonder how I would feel about dressing that way for work when I turned 40 ... or 50. I found the prospect of my older self dressed in work clothes shocking. I mean, it's fine to look the part of the young tradeswoman or artist, but once you grow up, you become something else: vaguely threatening. Not just because you appear sufficiently confident to flout conventional indicators of class and gender, but also because age implies experience, and thus competence. Perhaps even authority.

Perfectly manicured hands may symbolize status -- after all, you can't have them if you knead bread dough, scrub floors or sand wood. But they're not unlike stiletto-heeled shoes. To wear them, you have to be complicit in your own constraint.

PHOTO GALLERY
This is what [REAL WOMEN WORKING] look like
Download
Calling all HuffPost superfans!
Sign up for membership to become a founding member and help shape HuffPost's next chapter
Join HuffPost 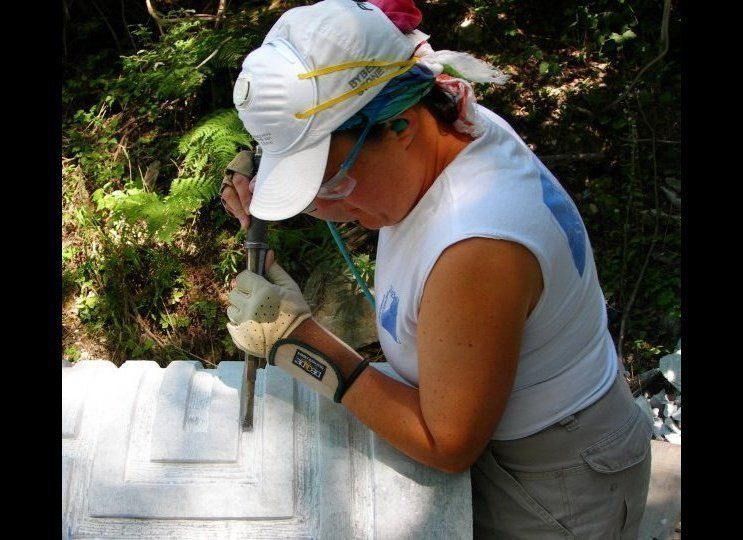