As you may have heard, it's been a bad week for Mitt Romney. And while he's taken a tumble in the polls, nationally it's still a fairly close race. But both nationwide and in some key swing states, Obama's lead among women has widened considerably. Women are behind the Obama surge.

National polling averages, like Huffington Post's own model, show a 3-point race. Other polls show a wider race, and in some, like Gallup's tracking in swing states, the race is tighter. Individual swing states, like Virginia and Ohio, also show a clear Obama lead.

Most of this movement has come from women voters. The chart below shows Obama's margin over Romney broken out by gender in public polls from August 20 through today (all telephone or IVR public polls I could easily find are included; none were left out). Not only do women consistently give Obama the edge, the gender gap in Obama's performance seems to be widening. 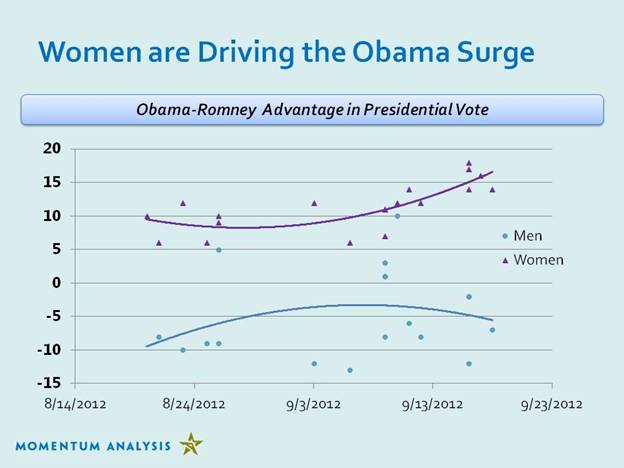 The gender gap in the most recent Pew poll is +10 (defined as the difference between men and women's support for Obama). In 2008, Obama benefited from a 7-point gap. A double-digit gender gap would be larger than that of most past presidential races. And while a large gap doesn't always lead to a Democratic victory, this year it would, as Obama has led Romney more often than not.