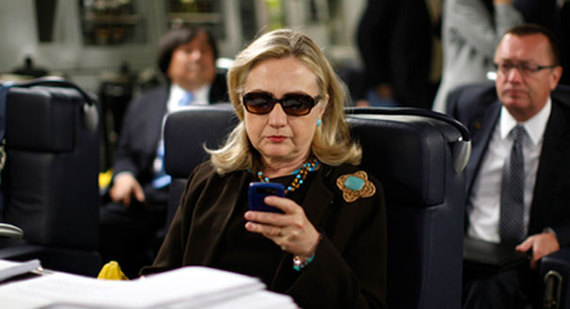 Let's be honest: men are crappy leaders. For every inspirational Nelson Mandela there's a tyrannical Kim Jong-il and about a hundred lousy James Buchanans in the middle. Now, the average mediocrity of male leaders is probably more of a result of the mediocrity of humans and not just that of a specific sex, but without an equal amount of female leaders present today and throughout history, we cannot be quite certain if this stereotype is true. Similarly, we cannot be certain if the reverse stereotype is true: do women make horrible leaders as well?

A common answer among misogynists is yes, women would make terrible leaders because they are naturally much more emotional than their male counterparts. In the United States, this statement is usually bought up by conservative male guests on cable news channels whenever the subject of Hillary Clinton becoming president is mentioned. All of these men are worried that if a woman reached the highest office in the nation, she might have a lapse in judgment due to an elevation in hormones and nuke Moscow. In retaliation the surviving Russian government would nuke the United States, a large number of people would die and the Earth would collapse into a nuclear winter all because the White House kitchen ran out of chocolate and ibuprofen. So, for the sake of everyone's health, let's keep women away from the nuclear weapons.

But historically? When given the opportunity to rule, women have been better at it. In ancient Egypt, Hatshepsut ruled as pharaoh (pharaoh, not queen) for twenty years. During her reign, Hatshepsut established trade networks and extensive building projects making her one of most successful rulers of the ancient period. Moving forward in history, female leaders like Elizabeth I, the Nigerian queen Amina, Catherine the Great, and Queen Victoria have all outshone their male contemporaries. What is a queen without a king? Well, better.

Maybe some women do get a bit emotional and irate sometimes (but that probably has something to do with sexist comments men make). But men, both in and out of leadership positions, are not a beacon of objective, emotionless decision making that they paint themselves to be. From founding father Alexander Hamilton's constant emotional outbursts in the name of protecting his honor (for a more contemporary example in American politics just have a good look any male member of Congress) to Joseph Stalin's numerous crimes against humanity in order to preserve his leadership position, men are capable of doing stupid and horrible things, with or without an emotional influence.

In the modern world, female leadership, particularly in democratic governments, has increased. Come January, it will be the first time in American history that the number of female representatives in Congress has reached 100. Numerous countries (like Chile, Argentina, Liberia, Pakistan, India and Germany) have had or currently have a woman holding the most powerful office in government. Like men, this group of modern-day women leaders has both successful individuals and unsuccessful ones. That's because women are individuals, just like men.

Saying women or men make better leaders is an overgeneralization of a large and diverse group of individuals who have nothing in common except for claiming the same gender identity. Maybe women are better. We're not quite sure because there's been so few female leaders, compared to their male counterparts. The truth is, women have the capability to be both great and horrible leaders, if only they had the opportunity.