What you're about to read is perhaps the biggest violation of Bro Code ever committed to Garamond font. It may single-handedly spark more marital arguments (or end them forever), compromise more 'guys' nights out,' and generally emasculate more dads than anything since the Baby Bjorn. Guys, please don't shoot the messenger. The numbers don't lie.

Here's the hard truth: Today's women, particularly today's working women, and ESPECIALLY today's working moms, are getting completely ripped off. My wife, who holds down a big job and plays Super Mom to two hyper-busy kids, is chief among them, but she's not alone.

Yeah, on most days, I convince myself otherwise. I contribute a decent amount to the family bank account. I do almost all of the grocery shopping, cook the vast majority of meals, and chaperone my share of school parties. Every time I successfully braid my daughters' hair, I bask in the glow of my wife's good fortune - she married such an enlightened, progressive and equitable life partner. Bullshit. Like most men, I'm oblivious, self-centered, and - consciously or not - taking advantage of a system that is stacked against women at every turn.

Let me show you what I mean.

THE METEORIC RISE OF THE WORKING MOM

It's no secret that cultural and socio-economic forces have dramatically altered the traditional family unit. According to the US Department of Labor, women today comprise 47 percent of the U.S. labor force. In 1950, women accounted for less than 30 percent. At that rate of change, women could surpass men in the workforce during my lifetime.

According to CivicScience, 57 percent of adult women in the U.S. are currently employed for pay. Excluding retirees, students, and homemakers, 70 percent of women with children under the age of 18 are currently either working or looking for work. According to Pew, 46 percent of two-parent households include both a mom and dad who work full-time. That's an increase of 50 percent since 1970. Yes, there are still more working dads than working moms but the gap is closing fast.

THE GLACIAL RISE OF THE DOMESTICATED DAD

In our defense, these cultural and socio-economic forces have affected men as well. My dad wasn't even in the delivery room when I was born. He sure as hell never took me to "Mommy and Me" gymnastics, like I did with my kids. In a short timeframe, the percentage of U.S. dads who say they do the majority of grocery shopping for their home grew from 43 percent in 2014 to 47 percent this year (per CivicScience). The percentage of dads who buy the majority of children's and household products is growing slowly but steadily as well. Men do the household cooking at a higher rate than ever.

BUT THE OUTCOMES AREN'T EVEN CLOSE

You'd think that as more and more women enter the workforce, the household responsibilities would shift as well. And they are. Just not the way they should. Women may in fact be taking on even more of the work share.

Take a look at the results to this survey question CivicScience ran recently among people in married/multi-adult households: 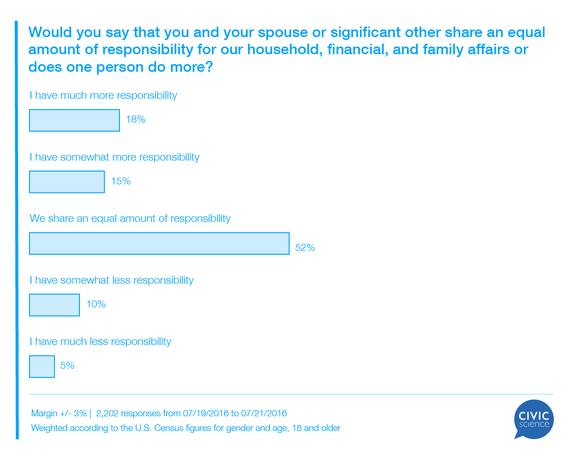 Before we dive into the numbers, understand that we are dealing with self-reported data here. Most people, men and women alike, are biased. We all probably think we carry more responsibility and receive less appreciation than we actually do. The average respondent was over 2X more likely to say they handle more responsibility than their spouse/partner. The results among men and women were virtually identical. But somebody's lying. That math doesn't work out.

Is it possible to dig a little further into the idea of "responsibility" to see who's really carrying the extra weight? I'm glad you asked. When we looked only at working moms and working dads who answered, here are a few things we found: 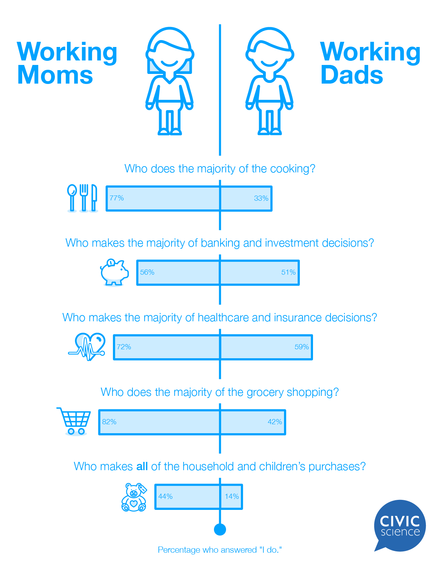 And no, misogynists, you can't make the blanket argument that working dads have more important careers, balancing out the inequities at home. Even when we narrowed the results to women in "Management" or "Professional" occupations, they still did/made significantly more cooking (69 percent), grocery shopping (61 percent), household/children's purchases (69 percent), banking/investment decisions (54 percent), healthcare and insurance decisions (57 percent) than their professional/management-level husbands.

Or maybe you want to argue that, even in these professional/management jobs, the women make less money, leaving the men to carry more of the financial burden. Yeah, go ahead and hang your hat on that. Women love being reminded of the realities of gender discrimination in the workplace.

Admittedly, we don't study things like "doing the majority of yard work" or "handling the majority of auto repairs," which could conceivably tilt in men's favor. But we also don't study things like who manages "the majority of children's schedules and activities" (which Pew said is skewed toward working moms by a factor of 9 to 1), or "taking care of children when they're sick" (which skews nearly 8 to 1). We don't even need data to know who gets the short end of the stick on the whole "pregnancy, childbirth, breastfeeding" thing.

So let's review here. Men are 2X more likely to say they have more family responsibilities than their working spouse or partner, even though they make fewer banking, investment, healthcare, or insurance decisions and do significantly less cooking, grocery or other shopping, coordination of kid activities, and taking care of children when they're sick. Got it.

And one more thing. Working moms are 20 percent more likely than working dads to say their lives are "Very Stressful." Maybe that's because they have so much more responsibility. Or maybe it's because they live with a man who doesn't realize it.

Either way, I need to be nicer to my wife. I hate it when our data proves her right.

I assume a lot of people, oft-slighted women and guilt-ridden men, can relate to this topic. But that's not the only reason it was worthy of the time we took to study it. Brands and advertisers need to take note as well. The changing socio-cultural-economic dynamics of the U.S. household will continue to change the marketing landscape in big ways.

There are opportunities for advertisers to get ahead of these changes. The rapid increase in women as household finance and investment officers should create new avenues for forward-thinking banks and insurance companies to gain market share. Any brand in a high-priced category (like cars or large home electronics) might consider shifting more marketing dollars away from male-leaning avenues like pro sports sponsorships and toward things like the arts, K-12 education programs, or other social philanthropy.

And I wouldn't mind if a little more cooking and grocery-related marketing was geared toward me and my male compatriots, but I certainly have no right to complain about it... or to complain about anything for that matter.