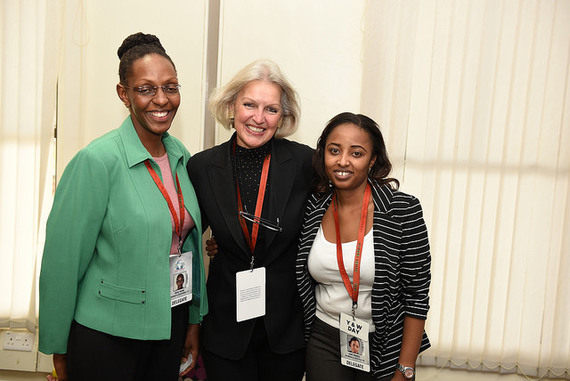 When you thought about the most successful individuals in the world fifteen years ago, you would typically be thinking about men like Bill Gates or Steve Jobs. You see, most CEOs are and were men. Unfortunately there are some in the professional world who attribute this to the supposed unsuitability of women in leadership roles. Tell that to Sheryl Sandberg (COO of Facebook) or Mary Barra (CEO of General Motors), two powerful women in business who have thrived at the highest levels of corporate life.

Besides hard work and perseverance, women's secret weapon to success is higher education. It's much more difficult to be denied an opportunity when you have the experience and credentials that prove your abilities. An attitude of putting the best person in the role should always hold true, regardless of gender. In 1970, only 11% of professional women had college degrees. As of 2013? 39 percent of professional women possess college degrees, compared to 29.5 percent of men - leading men by a significant 9.5 percent college attainment margin.

Many entrepreneurial women have had to overcome tremendous obstacles to get where they are today. Arianna Huffington said that, "Fearlessness is not the absence of fear. It's the mastery of fear. It's about getting up one more time than we fall down."

Fearlessness is essential in the face of unfair systemic and cultural disadvantages. When you talk about the wage gap, some critics fire back that women are only behind the curve because it's what they chose for themselves. From an early age boys and girls are taught gender stereotypes for how they should act and what they should see as possible. Too many children don't grow up believing that they can do anything. With these limiting beliefs thrust upon them, they too often pursue only what fits within preconceived cultural notions about their gender identity that they had no part in shaping and are unknowingly perpetuating.

Equality detractors don't recognize that the system currently in place disproportionately benefits men - but it's slowly changing. Talent is talent. Hard work is hard work. It should not matter what gender you are as long as you are capable and willing to dedicate yourself to your dreams. It's been a long fight in the U.S. (starting in many ways with the women's suffrage movement) but the barriers are being smashed.

When you think of gendered childhood stereotypes, you probably imagine boys wanting to be astronauts or soldiers or scientists. In comparison, stereotypical girls are pretending to be princesses and nurses and fashion designers. There's nothing inherently wrong with boys or girls wanting to be any of these things, but what is wrong is the idea that these areas and interests are inherently tied to gender. 100 years from now it could very well be a woman who develops the cure to cancer. Women can be astronauts, engineers, battlefield generals, software engineers, and so much more. The rise of women in technology fields is well-documented and tied directly to women increasingly achieving advanced degrees in STEM fields.

Women taking their part as equals offers the kind of diversity that humanity needs to improve the world. It doesn't make any sense to exclude half of the population, thus automatically rejecting half of the world's ideas and half of the world's talent. Women draw on their experiences and approach problems differently because they have had their own unique trials to overcome. Professional women deserve opportunities to distinguish themselves in any industry without restriction based on archaic ideas of gender capability. It's only a matter of time, because women are already systematically smashing every unfair barrier placed in their path. The march toward equality will not be stopped.