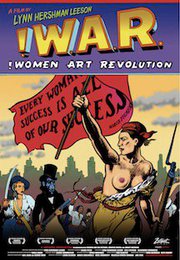 In 2007, the Museum of Modern Art organized a two-day symposium titled "The Feminist Future: Theory and Practice in the Visual Arts." My strongest memory of that event was of artists predominate in the women's art scene of the '60s and '70s, lining up at the microphones in the aisles -- with a call to remember the contributions that they and other artist/activists had made.

Four years later on March 3rd, in the same auditorium, !Women Art Revolution -- A Secret History was screened. The long-awaited documentary by Lynn Hershman Leeson has been shown at the 2010 Toronto International Film Festival, the 2011 Sundance Film Festival and the Berlin Film Festival. The evening began with Assistant Curator of Film and Video Sally Berger, introducing Gloria Steinem.

Steinem recounted demonstrating outside the Museum with the rallying cry, "MoMA is a female impersonator." She spoke about how "Women were bringing real life into their work," while the prevailing male artists engaged in Abstract Expression "of those times were not looking for collaborators." She observed, "This is such precious footage, because it's about the work as it is going on." She concluded that through the film had brought, "The other half of the human race has into the artworld."

Indeed. The movie incorporates forty-two years of archival footage and personal interviews that Hershman Leeson began shooting in 1966 -- when she "borrowed a camera, figured out how to use it, and shot people coming through my living room in Berkeley." Stored in her studio, Hershman Leeson found the documentation in 2004. She resolved to "honor the women who struggled to invent themselves and who introduced the concepts of social protest, collaboration and public art that addressed directly the political imperatives of social justice and civil rights."

Hershman Leeson reiterated in the Q & A that it was her personal history that "underpinned" the construction of the film. She acknowledged that there was "much that isn't mentioned." Since, "The story doesn't end," there is an online global text and community archive that "is almost like a wiki."

A graphic novel encapsulating the film was handed out to attendees. Written by Hershman Leeson and Alexandra Chowaniec, in partnership with renowned cartoonist Spain Rodriguez, it includes a curriculum guide, interviews, timelines and website resources. These include the link to the complete video interviews archived at the Stanford University Library, and the RAW/WAR project--which "continues the revolution." The premise is to use new technologies so that "current and future generations can create their own histories, breaking the cycle of omission and erasure."

Artists Mierle Laderman Ukeles and Howardena Pindell joined Hershman Leeson at the podium for the talk back session. Hershman Leeson spoke about doing "creative work within a culture that makes a difference." Pindell addressed the issue of lack of diversity, a problem that has continually dogged the feminist movement. She said, "We should remember that the United States is only 5 percent of the world. We need to reach out to women of color." It was acknowledged that there were deep differences and disparate points of view within the feminist art community, without an allowance for "a big enough tent." In response to the statement that the film was "populated with some of those disagreements," Hershman Leeson quipped, "There's a lot more in the archives!"

"!Women Art Revolution" will have its theatrical premiere at Manhattan's IFC Center on June 3. 2011, with a schedule of additional dates around the country.