Here are some things I know about the art world:

These are just numbers, yes, with a few anecdotes tossed in. And if I've cherry-picked my facts, I welcome a more comprehensive statistical overview (though I doubt it would tell a much different story). The reality is: women are underrepresented in the art world.

It's not just that women (and particularly women of color) don't get as many solo shows. They don't get as many directorial positions, they don't fill the top slots at art auctions. All of this, despite the fact that in most countries, women make up more than 50 percent of those graduating with degrees in Arts & Humanities. It's impossible to know just how many women artists exist in this world, but we know they're earning half the MFAs granted in the U.S. Compare that to the bullet points above.

The situation is ... frustrating. It provokes diatribes like "11 Women Artists Who Should Have Their Own MoMA Retrospective," or "The 19th Century American Women Artists You Don't Know, But Should," or even "10 Amazing Female Artists And Their Male Muses." These articles practically scream, "These Are The Women Artists You're Overlooking!" or, "Seriously, Women Aren't Just Nude Models Or Picasso's Sidekicks."

Alas, frustration comes from all sides. There are also articles like "Why Aren’t 'Women Street Artists' Just 'Street Artists'?" and "How Not To Write About Women Artists" both of which take issue with the nomenclature. While they don't always question the intention behind lists like the ones I cited above, critics often argue that the term "women artist," or its sister phrase "female artist," does more harm than it does good. They wonder: is the act of grouping women artists into one happy contingent reductive?

It's a valid concern -- one that we'll probably continue to debate as we inch closer and closer to gender parity in the art workplace. Our thoughts will evolve as women move out of the periphery and into more and more spotlights. But for now, let's address the critiques as they apply to us today. Here are some of the arguments against using the term "woman artist."

1. The term "woman artist" necessarily pits women against men, or it narrowly gauges women's success in terms of men's.

By separating women artists from the men, a critic might say, we're reinforcing the idea that men are the default when it comes to artists. Similarly, by choosing to highlight women in this way, we are accepting the terms of success set by men. Along this line of reasoning, headlines like, "In search of a female Banksy: Aiko and Faith47 take on a male-dominated street art world," might seem trite.

We published a work titled "10 Women Artists Who Are Better Than Banksy," expressed with an ample amount of tongue in cheek. But still, words are powerful, and more than a few of our commenters took issue with the framing.

Counterpoint: In these circumstances, I'm reminded of the Guerrilla Girls' salty list of the advantages of being a woman artist, which includes: Being included in revised versions of art history. (Cue a heavy dose of sarcasm.) It's true that revisionary history is not ideal, but success has been defined by men for centuries. And male, in sheer numbers, is the default gender for artists. By bringing to light the number of women reshaping success and our definition of the artist, we can only hope that we are combating narrow thinking, rather than augmenting it. And that is a risk.

2. Using gender as a filter through which we analyze creativity is limiting.

There are the artists who firmly state, "I don't consider myself a woman artist, I am simply an artist." And that is a perfectly legitimate response for an individual to take. An artist whose work has nothing to do with her gender should probably not be labeled, in a stand-alone piece, a "woman artist," particularly when that artist has expressed animosity toward the term.

Counterpoint: Women artists are artists. But they aren't just artists. Not today. The numbers alone make women artists a minority in most sectors. Now, are women artists more than women artists? Of course. Women embody a panoply of identities, and choosing which ones they adhere to is a right, not a privilege. But we should also recognize that when an individual professes not to focus on gender or race in their work -- in turn, shirking the label "female artist" -- that doesn't mean that issues of gender and race are not at play.

3. Gender is a spectrum.

This is very true. Rather than a counterpoint, I'd like to echo the language of the theater advocacy group The Kilroys or the Bindercon community, both of which include trans women and gender non-conforming individuals among their ranks of women.

Critics often say that what we need more than "flem-fluff" -- superficial coverage of feminist issues that lack analytical substance -- is an understanding of the systemic problems that amount to underrepresentation and the broader practices that keep us from reaching gender parity in the art world. We can't comprehend the economics of gender discrimination in the art labor market without investigative reports that pinpoint the institutions, rules and behaviors that promote sexism and racism. This is all incredibly true -- and I hope to continue to help produce, edit and read thoughtful journalism like this.

Counterpoint: At the same time, when young adults today are growing up in a world in which women are so poorly represented in the fields they aspire to join, what can we do outside of investigative journalism? We can pinpoint and honor the women who are otherwise overlooked.

So why do we use the term "women artists"? Because, in the words of fellow HuffPost editor Emma Gray -- leader of the Women's section here who thoughtfully spoke to me about this issue -- we believe a collective of successful women can be a powerful thing. It can be problematic when a male critic like Ken Johnson groups women together in order to generalize the pitfalls of a gender. But it can be empowering when a site like Broadly or an initiative like Ridykeulous groups women and gender non-conforming people together in order to build a coalition or a safe and productive space. Context is important, and our context is this: we want to celebrate and honor the women blazing trails in their fields, despite the narrative stats like the ones above are telling us.

At the end of the day, in order to confront disparity, we (curators, art collectors, regular people!) need more information. Perhaps lists like "10 Women Artists Who Are Better Than Banksy" aren't leading an educational revolution, but the point of lists like "14 Women Artists Who've Changed The Way We Think About Design" is to raise visibility for the female figures who are otherwise being ignored.

Let's Talk About 'Women Artists' And What This Term Means
Faces of Courage: Intimate Portraits of Women on the Edge 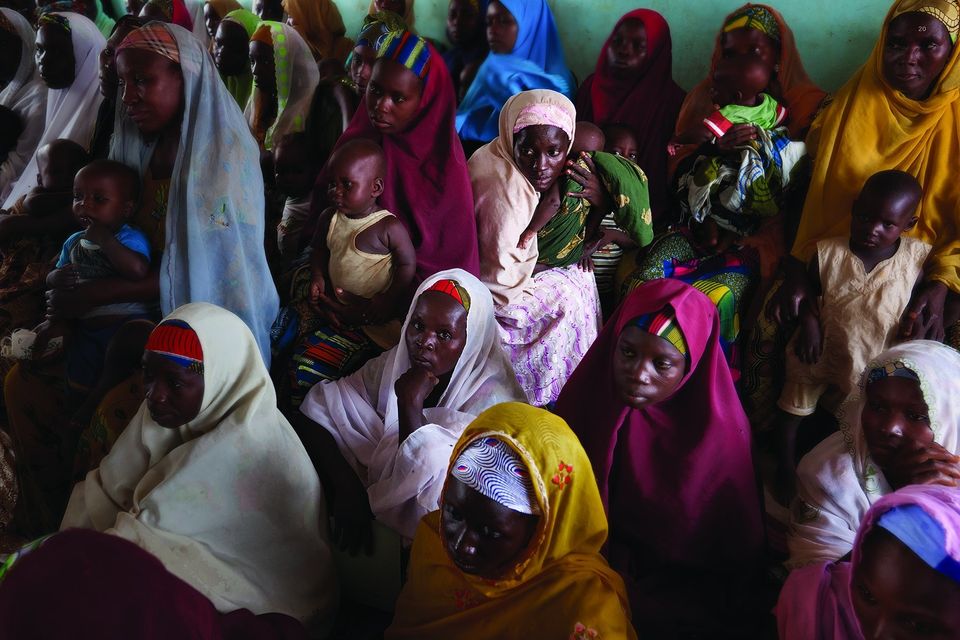