Earlier this week, we published an interview with Brenda Berkman, a New York City Firefighter who worked at Ground Zero in the aftermath of the September 11, 2001 attacks on the World Trade Center.

Today, on the tenth anniversary of that day, we're proud to present profiles of two other women who were among the first responders on the scene at Ground Zero, New York City police officer Carol Paukner and New York City firefighter Regina Wilson, along with a video of Berkman talking about her career and her 9/11 experience. All three originally appeared on the new site Women You Should Know, whose self-described mission is "to shine a spotlight on women who are making things happen in their world."

Given the timing of Women You Should Know's launch earlier this week, the site's founders wrote, they knew they wanted to focus on the female emergency service personnel who reported for duty at Ground Zero on 9/11. There was only one problem:

"We didn’t know, for sure, if there were any women first responders. Yes, we agree, that it might seem like an odd question to ask, 'Were there even any women there?' But, as none of us could recall seeing any news coverage or pictures of women firefighters, police officers, EMTs, FBI agents, etc. connected to 9/11, we started doing some research ... women seemed to have gone missing from almost every account we read or viewed about this very dark part of our country’s history."

They ultimately located women to profile through the book and project "Women At Ground Zero."

These three women were there at Ground Zero on 9/11 and for days and in some cases weeks after, sustaining physical and psychological injuries as they worked to rescue others trapped in the rubble, search for remains, and secure the area. Today, we honor them.

Women Women You Should Know September 11 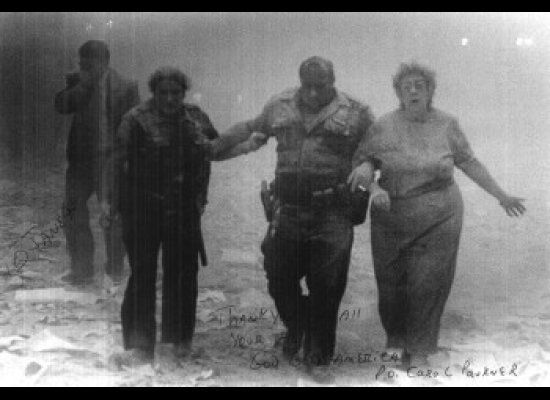 1 / 3
Carol Paukner, NYPD
For almost 10 years, NYPD Police Officer Carol Paukner worked around and inside the World Trade Center patrolling the NYC subway lines that were below the buildings on the concourse level. She knew the area well and a lot the people who worked there. On the morning of September 11, 2001, Carol and her partner, Tracy Donahoo, a rookie at the time, were assigned to the Broadway/Nassau station one block from the World Trade Center when Carol received a call about "unknown conditions" at the Twin Towers. They came up out of the subway and saw the street covered with debris. A woman pointed up and that was when they saw the back end of a plane sticking out of the North Tower with the nose buried in the building. Carol, the second officer to respond on 9/11, got on her radio and confirmed, "A plane has hit the World Trade Center." In the chaos that ensued, Carol and Tracy ran to the South Tower and immediately started to evacuate people to safety, but they eventually got separated from one another. There were objects flying through the air, people desperately jumping to their deaths from the North Tower and panic on the ground. Carol recalls encountering an FBI agent who warned her and the other first responders who were close by, "There are more planes coming. We're under attack. You're going to die if you stay here." Carol's response, like the response of so many other women and men that day, was simple, yet resolute, "We're not leaving." Carol Paukner's poignant words are the title of a <a href="http://www.greenpointpress.org/gb_book_leaving.html" target="_hplink">new book written by Benjamin J. Luft, M.D.</a>, the Edmund D. Pellegrino Professor of Medicine at SUNY Stony Brook and founder of the Long Island World Trade Center Medical Monitoring and Treatment Program. <a href="http://www.amazon.com/Were-Not-Leaving-Responders-Sacrifice/dp/0983237026?tag=thehuffingtop-20" target="_hplink">'We're Not Leaving'</a> is a compilation of powerful first-person narratives told from the vantage point of World Trade Center disaster workers - police officers, firefighters, construction workers, and other volunteers at the site - ordinary people who responded to disaster and devastation in extraordinary ways. The deeply personal stories, which include Carol Paukner's firsthand account, focus on personal strength and renewal in the ten years since September 11, 2001. Carol Paukner did not leave on 9/11. Her priority was saving the lives of others. She continued to help evacuate as many people as she could even after she, herself, sustained a number of serious injuries - a torn rotator cuff and knee, her neck and foot were injured and her corneas were burned (she later developed a lung infection). While everyone she knew who worked in that area was killed, Carol miraculously survived. Despite being thrown through a glass window from the force of a falling metal object and later that morning, being propelled through an exit door of the South Tower and subsequently buried under rubble, Carol went right back to work in the days following 9/11. She retired from the NYPD a few years later due to the injuries she sustained in her rescue efforts. Today, Carol still suffers multiple 9/11 related health issues, but has an incredibly inspiring perspective on life. We encourage you to read her story of bravery, self-sacrifice and healing in Dr. Luft's We're Not Leaving. Carol Paukner and Dr. Luft will be profiled as part of an hour long special devoted to 9/11 on "<a href="http://www.cbsnews.com/stories/2011/09/01/60minutes/main20100467.shtml?tag=contentMain;cbsCarousel" target="_hplink">60 Minutes</a>" this Sunday, September 11 at 7 p.m. ET/PT on the CBS Television Network.