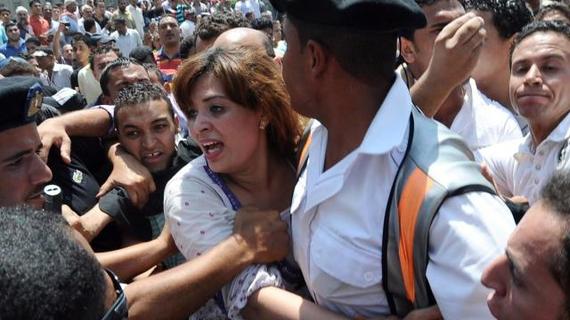 Amira, 26, commutes to work every day by bus. "Most of the time it is too crowded to sit", she says. One night she is almost at her stop when a man standing next to her tries to shove his hand down her trousers.

"From behind I felt somebody lift up my shirt and put their hand between my belt en my skin," Amira describes, recalling how she created a big scene and dragged the man to the nearest police station.

It's been more than ten months since Egypt adopted a new law that was supposed to make it easier for women in Egypt to press charges against someone who has sexually harassed them. Unfortunately, in reality, not much has changed.

At first the police officers made fun of Amira. "Go home, girl, they told me."

When she insisted on pressing charges they started threatening her. "The officers knew who my father is, where he works and what his boss' name is. 'Surely your father wouldn't like to hear that his daughter is a whore' one of them said. They stood uncomfortably close to me the whole time and everybody in the building seemed to be undressing me with their eyes. They catcalled me and whispered dirty comments."

"If you press charges for sexual harassment you get humiliated twice. First there is the actual incident and then you get harassed again at the police station", Reda El-Danbouki, a prominent lawyer and women's rights activist explains. "It creates a threshold to press charges and that is exactly what they want."

"I stared straight into his crotch. He had seen me come down the side-walk and was waiting for me to get in between the truck and the wall so he could show me his privates. It was disgusting," Kate says.

Terrified, Kate hurried back into her friends car and the truck sped off. "I was flabbergasted," Kate remembers. Her friend chased the harasser and after a wild pursuit they managed to corner the truck and take the driver to the police station to file a report against him and press charges.

"Initially they didn't understand what we came for", recalls Kate. "Then I had to give a statement, while the harasser sat in the chair next to me. The officer was merely jotting down some key words. He didn't take it seriously at all. After a while the harasser's family came to the police station and they filed a report against my friend. They claimed he had stolen money from them! Completely ridiculous, but the police were all too keen to arrest my friend and throw him in jail. His hands cuffed to those of my harasser, mind you. My friend spend an entire night in prison like that!"

Both Kate and Amira say they expected to face trouble pressing charges, but neither of them anticipated the system's discouragement to exercise their rights would be so grotesque.

In the end, Amira decided to withdraw the charges against her harasser. "Everybody - and I really mean everybody - was on my case about it. The cashiers at the supermarket, my building's doorman, my neighbours, my family. I was getting phone calls from distant relatives I had never even heard of. Complete strangers were sending me Facebook messages. Everybody was asking whether pressing charges was 'really necessary' and if I couldn't just 'let it go this one time'. But that is exactly the problem: this is not just 'one time'. This is the zillionth time. I get harassed by men like this on a daily basis. Enough is enough", she says, fuming with anger.

But when even her mother started to question whether going to court was such a good idea Amira relented and sent her father to the police station to drop the case.

"I was tired and done, I didn't have the energy for it anymore", she says, sounding very disappointed.

Meanwhile, it took Kate half a day and a full night at the police station and the prosecutor's office, but in the end the man who sexually harassed her got sentenced to three months in prison. Unfortunately, Kate paid a high price for that: she has had to move to the other side of the city.

"The perpetrator lives in my neighbourhood and my house was constantly being watched by all of his friends, family and acquaintances," Kate explains.

HAVING THE RIGHT CONTACTS

Despite having to move houses, Kate doesn't regret pressing charges. "I would definitely do it again", she insists.

"I wouldn't take an Egyptian friend with me though", she adds. "I am absolutely horrified by what he has been through just for trying to help me get justice. If he wouldn't have had the right contacts to get him out of jail who knows what could have happened to him. They could have locked him up for months or maybe even years!"

Explaining why women face issues bringing charges against perpetrators, El-Danbouki links the phenomenon to the paternalistic nature of Egyptian society.

"Egypt is a paternalistic society in which women are ignored and belittled", El-Danbouki says. "We will need an enormous cultural shift for that to start changing."

Nevertheless, El-Danbouki remains optimistic. "Every time somebody goes to prison for sexual harassment it sends a message to future perpetrators and the whole society that this kind of barbaric behaviour is simply not acceptable."