We're bombarded on a daily basis with images of ideal beauty. These images show up so often in our daily lives that it's easy to forget how new they are; that 150 years ago most women didn't see any photographs of other women -- much less a daily barrage of Photoshopped advertisements.

Having so many ways to showcase beauty and personal self-expression is awesome. But when most mainstream images push one narrow depiction of beauty, it also suggests that women who don't look like that are inadequate.

When you think about it, women are facing a daily visual battle unprecedented in history:

Unless you were really wealthy, you wouldn't have even had a mirror prior to the late-19th century! 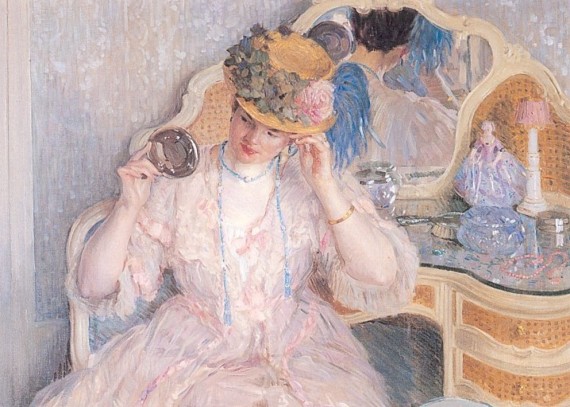 Checking yourself out used to be expensive! According to Carla Rice's book, Becoming Women, only the wealthy could afford a mirror, which cost the equivalent of a luxury car. Besides, most glass surfaces were wonky and uneven, so your appearance could vary dramatically from mirror to mirror, according to Kathy Peiss in Hope In A Jar. Peiss says that many people didn't really know what they looked like until the late 19th century, when glass mirrors became a common presence.

The first widely-available images of American women were in fashion magazines. 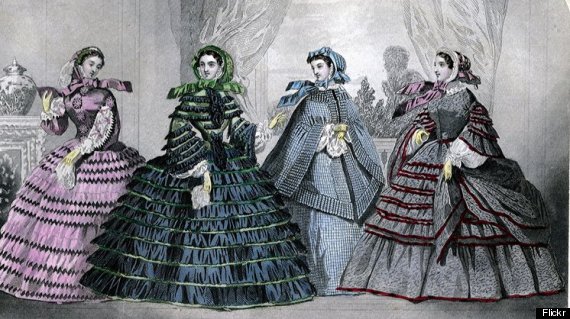 In Carnival on the Page, Isabelle Lehuu writes that commercial depictions of women's fashion first became popular in the U.S. in the early 19th century. These hand-colored engravings showcased the fashions of the time, rather than individual women. At the time, makeup was associated with prostitution, cosmetics were homemade and too much concern with physical beauty was considered vain.

By the 1860s, photography became widely available to average Americans -- and with it, new anxiety about looking good. 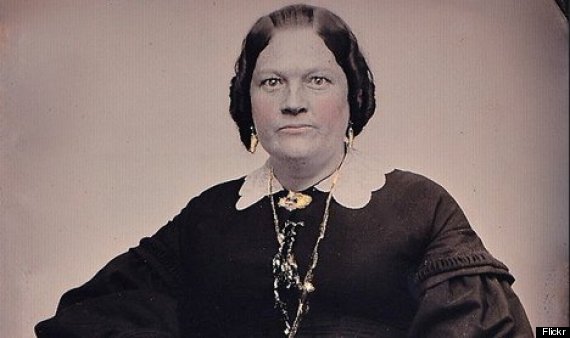 By this time, middle-class Americans could afford to have their portraits taken at studios. According to Peiss, this was the first time many Americans had a permanent, fixed image of what they objectively looked like, and they were often depressed by what they saw. One photography manual noted that the photograph called more attention to women's facial features and began supplying makeup at their studios. Celebrity photos hit the market; Americans would buy photos of their favorite celebrities and even include them in their family photo albums.

In the late 19th-century, the growth of mass media created an explosion of imagery, the most popular of which was the beautiful, young American woman. 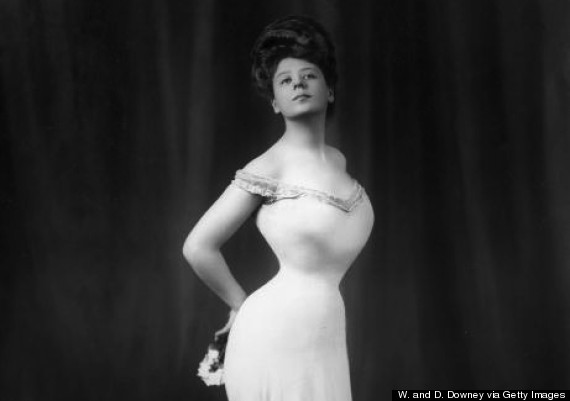 In the late 19th century, women's magazines started being mass-produced and widely available. To compete in the growing market, editors began featuring "Cover Girls" on their magazine covers. The most famous was the "Gibson Girl," shown above. The Gibson Girl is considered the first nationwide image of the ideal American woman, and her face was mass-produced everywhere from scarves to china to wallpaper.

In the 1920s, women became the central targets of the booming advertising industry. By 1930, women said ads made them feel badly about themselves.

Spending on advertising ballooned throughout the 1910s and 20s, and most of it targeted women. In the past, beauty regimes were mostly a pastime of wealthy women; '20s beauty advertisements established it as a goal and even mandatory duty of all womankind. As a 1924 ad put it: "Unless you are one woman in a thousand, you must use powder and rouge."

Ads equated beauty with love and social status; black women were targeted with advertisements selling dangerous skin lighteners as a means to social advancement. Ads used imagery that encouraged women subconsciously to compare themselves to models, and to see their own bodies as "things to be created competitively against other women," as Stuart Ewen writes in "Captains Of Consciousness."

The Hollywood film industry increasingly defined the image of the ideal American woman. 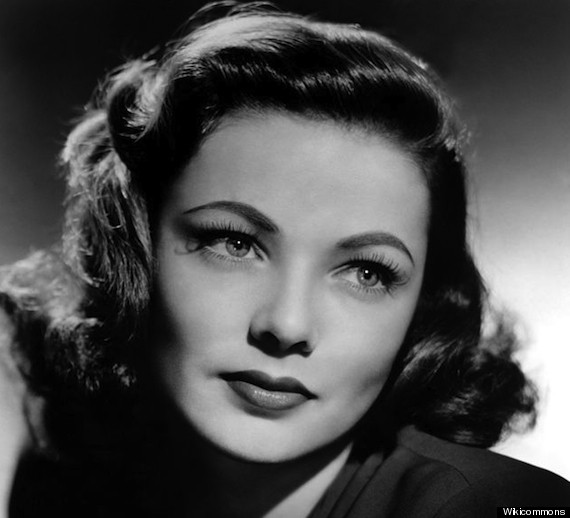 Hollywood films created new standards of attractiveness, particularly as the increasingly popular glamorous Hollywood close-up made actors' facial features, and their makeup, more noticeable. Throughout the '30s, more and more American women bought celebrity-endorsed cosmetics and Hollywood beauty how-to-manuals in the hopes of looking like their favorite starlets. Makeup, once considered tacky, was now glamorous. Peiss says that by 1940, "The attractive, made-up woman bespoke the American way of life." The US government even declared lipstick a wartime necessity.

In the '40s and '50s, the television brought moving images of glamorous actresses and beauty commercials into the home. 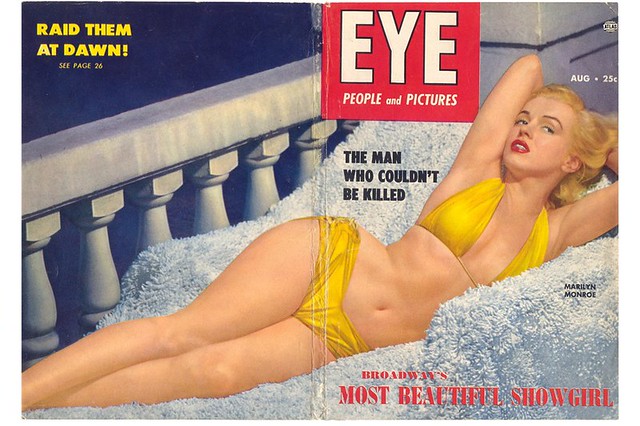 Proven to be especially effective in marketing beauty products, the cosmetic industry poured money into its TV commercials. Cosmetics sales boomed, tons of new products were invented and beauty products were increasingly marketed to teens and tweens, often at schools or youth groups. TV also made beauty pageants into worldwide events -- the search for the pretty face was now an industry. Marilyn Monroe embodied the beauty ideal of the moment. Beauty had truly become a major goal for the American woman.

From the '60s onward, the female body became increasingly exposed, and subject to increased scrutiny.

Images of women became slimmer everywhere, from Vogue fashion spreads and Miss America pageants to Hollywood movies and average women were encouraged to strive for this look. While women have always been subject to strict body-image standards, women were now exposed to so many more images of an ideal body on a daily basis. According to Naomi Wolf's The Beauty Myth, beauty magazines faced with low sales in the late '60s shifted their focus from fashion to the female body, and between 1968 and 1972, the number of diet-related articles grew by 70 percent. Media obsession with thinness took a toll: Wolf cites two studies that showed that the number of teenage girls who thought they were fat grew from 50 percent in 1966 to 80 percent by 1969.

From the '70s on, images of women also became increasingly sexualized. 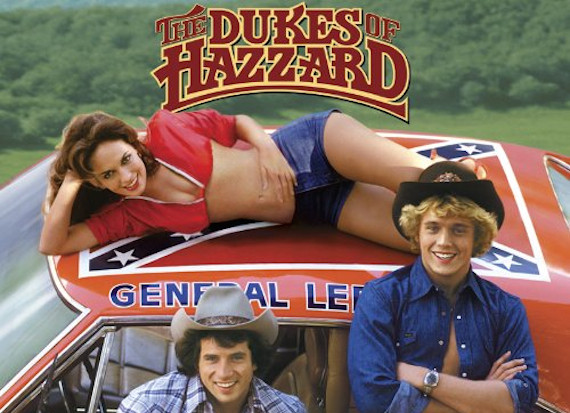 From the '70s and on, women in advertisements became increasingly objectified and wore less and less clothing. Meanwhile, the gap between models' weights and that of the average American woman's continued to increase. By the '90s, women were most typically playing the role, and looking the role, of a sexually-available object, everywhere from music videos to television commercials, from magazines to primetime television.

And the beautiful women depicted were still predominately white. 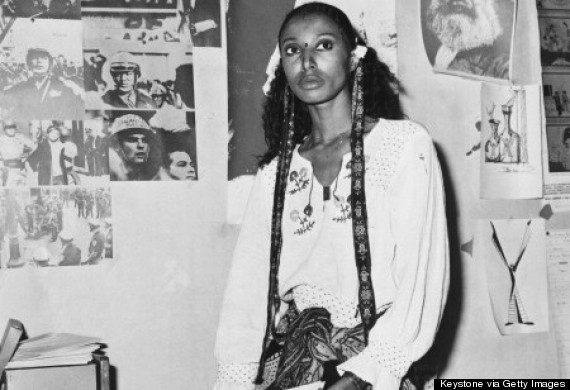 While women of color were creating their own artistic images, the primary cultural beauty standard was always presented as white. As Maxine Leeds Craig writes in Ain't I a Beauty Queen?, "Before 1974, every Vogue cover had featured a white woman, before 1983, every Miss America was white." The television and film industries were similarly whitewashed. Still, many women of color broke down barriers to gain visibility in the mainstream culture, like supermodel Donyale Luna, the first black woman to appear on the cover of Vogue. Although mainstream media began to become slightly more diverse from the '70s on, women of color still tended to be hyper-sexualized in ads and films and were often depicted to appear more "white."

In the '90s, Photoshop created a new form of feminine perfection, erasing natural body fat, signs of age or any perceived blemishes.

Photoshop programs were first invented in the '90s, and were used to create artistic, futuristic images. By 1995, a retouching was ubiquitous in mainstream ads, making women appear impossibly thin, with impossibly smooth, poreless skin. In 1985, one in three women said they were unhappy with their appearance in a Psychology Today survey. When asked the same question in a 1993 survey, one in two women felt that way.

Today, women are exposed to more digitally-altered media than ever. 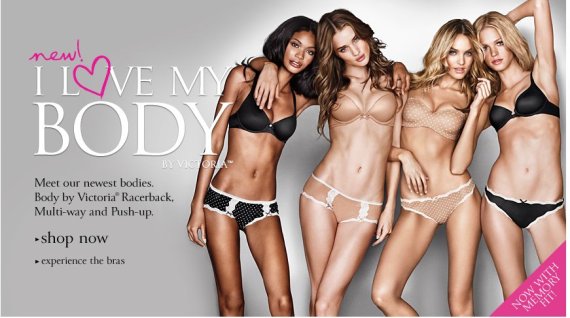 You know the drill: We're surrounded by images of women that are mostly underweight, mostly white, and often hyper-sexualized, at younger and younger ages. Adding social media into the mix, women are put in the position to compare themselves on a daily basis, not only to celebrities and models, but to their peers. everyday comparing themselves to friends and celebrities (who may even be photoshopping their photos.) It's a constant cycle of comparison and "improvement," fueled by the multi-billion dollar diet, plastic surgery and cosmetics industries.

Those visual comparisons seem to appear everywhere you look. And that can make cultivating positive body image seem difficult. But awesome women are challenging the tired standards of beauty sold by the mainstream and fighting to create new standards of beauty. This work questions the way our beauty culture marginalizes women of color and shames women who aren't stick-thin.

These images help counter the daily barrage of media images we all face, and serve as an important reminder that it's our culture -- not our bodies -- that needs a makeover.