There are all kinds of good reasons for the U.S. to finally catch up to the rest of the world when it comes to paid maternity leave.

Here’s another: Giving parents paid time off after a child is born helps launch women up the corporate ladder and into the boardroom, according to a new study from researchers at the University of Cambridge Judge Business School, commissioned by Bank of New York Mellon.

The report, presented at a conference this week in London, looked at the percentage of women on boards at 1,002 companies worldwide from 2004-2013. Unlike many other studies of gender in the boardroom, the researchers also considered how long women stayed on boards.

“Getting women on the board is very different from keeping them there,” lead researcher Sucheta Nadkarni, a management professor at Cambridge, told The Huffington Post.

The study looked across different countries to see what kinds of policies and cultural traits were linked to more women in the boardroom. They found that simply having a quota, requiring a certain percentage of women, doesn’t cut it when it comes to longevity. Quotas lend themselves to tokenism -- women for the sake of women.

Norway, which mandates that women make up 40 percent of a corporate board, leads the pack on gender diversity in the boardroom -- but is nowhere near the top when it comes to retaining women on the board. 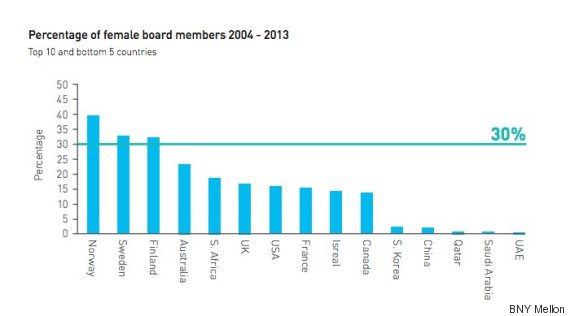 The study found that the strongest driver of women in the boardroom was what the authors call “female empowerment” -- the percentage of educated and employed women in a country.

“If educated and employed women play a stronger role in the marketplace, there’s a strong incentive for companies to make a board gender-inclusive to better serve their markets,” Nadkarni said.

Procter & Gamble is a good example here. The company, which makes a broad array of household products, caters heavily to women. And it's made gender inclusiveness a priority. Right now P&G’s board is 50 percent female.

A higher percentage of working, employed women also widens the labor pool -- meaning there are more women with a shot at the top.

Here are the top 10 countries for female empowerment, according to the data:

Not only do Australia, Norway and Denmark rank highest for female empowerment, they have better maternity and child-care provisions than the United States. The researchers also found that the Scandinavian countries on the list more strongly value gender egalitarianism, another key factor in getting women up the ladder.

Part of the problem in the U.S. is the percentage of females who are in the labor force hasn’t budged much over the years. The percentage of U.S. women working has ticked up only one percentage point to 75 percent since 1990. We're held back, in part, by pitiful maternity leave and child-care policies. Without supportive policies, more women find themselves forced out of the workforce.

The authors of this report emphasize that to help keep women working (and get them onto boards), you need strong policies like paid leave for mothers and fathers, breast-feeding work breaks, the right to return to work and flexible hours. The more women who can stay in the workforce, the more likely it is that a few of them reach the boardroom.

The U.S. federal governmen offers new parents only 12 weeks unpaid leave -- if they work at a company with more than 50 employees. The U.S. is the only industrialized country in the world that doesn't require employers to offer workers some kind of paid parental leave. And until the 2010 passage of Obamacare there were no concrete federal protections for women to take lactation breaks at work.

The report found other societal factors and cultural proclivities that help get women in the boardroom -- including the number of women in politics and corporate governance guidelines that focus on gender (not quotas, but more general provisions).

Provocatively, the researchers found that the more assertiveness is valued in a country, the more likely it is that women who obtain board seats, keep them. The U.S. ranks high for assertiveness, and is among the most successful countries at keeping women in the boardroom. 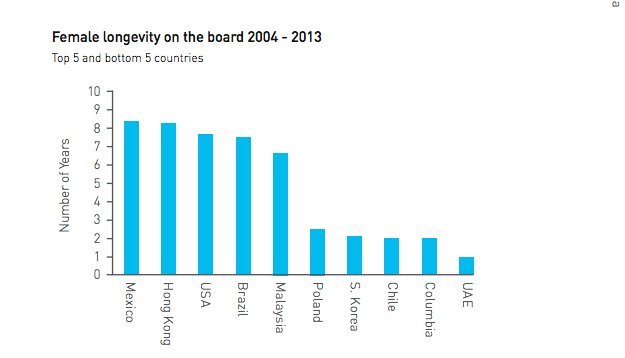 If we could only get our act together on the policy side, we could really move the needle.