Don't ever tell me I'm not "allowed" to do something. You can attempt to persuade me with logic. You can lobby me. You can even try to sweet-talk me. But forbid me from doing something? That's an invitation, as far as I'm concerned.

And that's what I'll be thinking about today, on April 16th, the 40th anniversary of women running in the Boston Marathon, when more than 27,000 runners from around the world will test their endurance, speed, and passion for their sport.

The race was first run in 1897, but for its first 75 years women were not "allowed" to run in it! Marathon officials of that era thought nothing of banning an entire gender from the event. It wasn't until 1972 that fairness prevailed.

It could make you angry all over again at the injustice of it all, if it wasn't for the stories -- great stories -- of how a handful of women managed to run the marathon anyway, even before the ban was lifted.

In 1966, Roberta Gibb was called the "bandit runner." She was the first woman to run the entire length of the Boston Marathon. But she didn't officially enter the race. She couldn't. She wasn't "allowed" -- and, therefore, had no numbered bib. So what she did was ingeniously mischievous. She hid in the bushes and jumped into the race late in order to get past the officials. She finished with an unofficial time of 3:21:40. My kinda gal.

Things picked up speed the next year, when Kathrine Switzer did Gibbs one better, in the process generating worldwide headlines for inciting what became known as "The Boston Incident." Switzer quietly registered under the name K. V. Switzer, and lined up with the boys at the starting line. And she did indeed run with them -- managing to remain undetected in the pack until halfway through the race, when officials suddenly became aware of her infiltration. The ensuing media storm, however, was less about Switzer's bold stunt than about the hapless desperation of official Jock Semple, who attempted to run Switzer down, rip off her numbers and forcibly remove her from the race.

Can you imagine the sight of that? Fortunately, Semple could not catch his prey, and Switzer tore through the finish line with a time of 4:20:00.

Ultimately, Gibbs and Switzer's back-to-back demonstrations of defiance convinced officials to lift their futile ban; and 1972, seven women entered the Boston Marathon for the first time. Nina Kuscsik became the first official women's champion with a finishing time of 3:10:26.

This triumph for women would have been spotless, were it not for a scandal that erupted at the 1980 Marathon, when a runner named Rosie Ruiz emerged from seemingly nowhere to win the women's race. Fact is, she had actually emerged from the bushes about a mile from the finish line, then stealthily blended into the crowd. When officials could not detect her in any of the early videotapes of the race, they realized they had been duped and Ruiz was deservedly disqualified. The true winner of the women's race that year was a Canadian named Jacqueline Gareau.

Since those early days, there have been many victories, many records broken and many dreams fulfilled. Kathrine Switzer went on to win the New York Marathon in 1974, and she dedicated her career to creating opportunities and equal status for women in sports around the world. A true role model.

And that's while I'll be watching this year's marathon, and scanning the crowd for that special determined face. Any one of those women runners could be our next leader of the pack. And how great that they don't have to hide in the bushes to do it.

Here's a look back at the history of women in the Boston Marathon. And good luck to the women of the 2012 race. On your mark, get set... 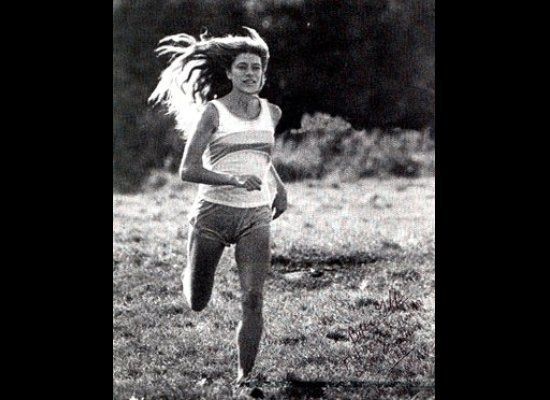 1 / 12
Roberta "Bobbi" Gibb
Roberta Gibb, known as "the bandit runner," was the first woman to run the full Boston Marathon in 1966. She hid in the bushes, waited for the runners to pass, and tried to blend in with everyone else. She finished at 3:21:40.
womens-spirit.com