The new Ghostbusters movie will have an all-female team, which in the real ghost-busting world is not so strange. Ghost hunting is one area of the paranormal that includes a lot of female participation. So much so, that I have known guys who have gotten into ghost hunting primarily to meet girls - and it has worked. 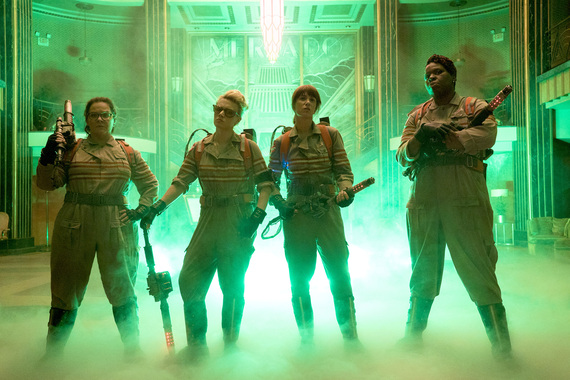 The all-female crew in the new Ghostbusters movie looking badass. The movie is set to release in the summer of 2016. (Image courtesy of Sony Pictures)

I decided to ask a long term ghost hunting friend of mine, Rosemary Ellen Guilley, her thoughts on women's interests in ghosts and the all-female crew in the new Ghostbusters. Guilley has written over 60 books on paranormal and metaphysical topics, including The Encyclopedia of Ghosts and Spirits. She has researched and hunted ghosts for decades and lectures at paranormal conferences regularly.

Guilley answered a few questions for me via email. According to Guilley, women's personal paranormal experiences are the primary drive for their interest in ghosts. However, she also says women "tend to be more openly psychic than men," and ghost hunting allows women to use these "natural talents."

Often ghost hunting groups are made up of men and women. She says both sexes work the tech and analyze evidence. However, Guilley believes there's more to ghost hunting than just night vision cameras and EMF readers.

"Most paranormal phenomena are not going to register on equipment, but they will register upon psychic senses," explains Guilley. "I have always advocated combining both high tech and natural tech in investigations."

Even though paranormal teams include greater gender equality, Guilley feels women are still overshadowed in paranormal movies and television. Guilley is no stranger to television. She has been interviewed on many cable TV shows and documentaries. However, she says paranormal television still has a problem with gender equity, especially the "reality" shows.

Guilley points out, "The usual age biases are still in place when it comes to TV: male authorities can be old, but women can be 'too old,' no matter what the level of their knowledge and expertise."

The new Ghostbusters movie doesn't have this problem. It features an all-female team portrayed by a very talented and hilarious group of actresses, including Melissa McCarthy, Kristen Wiig, Kate McKinnon and Leslie Jones.

Just like the original, the cast is made up of Saturday Night Live (SNL) veterans. SNL legend Dan Aykroyd, who starred in the first Ghostbusters movie, is an executive producer of the movie.

Aykroyd is known for his interest in the paranormal. He grew up in a family where paranormal topics were normal, his grandfather, Samuel Augustus Aykroyd, was a mystic and a spiritualist.

As for the all-female ghostbusting team in the new movie, Guilley says there is a lot of anticipation. According to Guilley, women are becoming more predominate on stage at paranormal conferences and there are more women writing books and running paranormal enterprises.

In reference to the movie, Guilley writes: "It looks like we have gotten past the Charlie's Angels stereotype of female teams to something more realistic."