Malaysia on Wednesday charged two women, an Indonesian and a Vietnamese, with murdering the estranged half brother of North Korea’s leader in a bizarre airport assassination using a super-toxic nerve agent that killed in minutes.

Siti Aishah, a 25-year-old mother of one from Jakarta, and Doan Thi Huong, 28, from rural northern Vietnam, could be hanged if they are convicted of the killing of Kim Jong Nam at Kuala Lumpur International Airport on Feb. 13.

Police brought the two women to court handcuffed. As they left, they were made to wear bullet-proof vests, reflecting Malaysian authorities’ fears that others involved in the killing could want the women silenced.

No plea was recorded after the charges were read out.

But Aishah and Huong have told diplomats who visited them in custody that they were unwitting pawns in an assassination that U.S. officials and South Korean intelligence have said was organized by North Korean agents.

Huong’s lawyer told reporters outside the court that his client had told him she was innocent.

“Of course, she’s definitely distressed because she is facing death penalty,” he added.

The next court date will be April 13, when prosecutors will apply for the accused to be tried jointly.

Kim Jong Nam, who had criticized the regime of his family and his half-brother Kim Jong Un, died after the two women allegedly smeared VX nerve agent, a chemical described by the United Nations as a weapon of mass destruction, across his face.

He had been preparing to catch a flight to Macau, the Chinese territory where he had been living under Beijing’s protection since going into exile several years ago.

According to the charges, the women and four unnamed people, who are still at large, were in the airport departure lounge with the intention of murdering the North Korean citizen.

One North Korean man, identified by police as Ri Jong Chol, is still in police custody and has not been charged. Police have identified seven other North Koreans wanted in connection with the case, including an embassy official in Kuala Lumpur.

Amid a bitter diplomatic row, members of Malaysia’s cabinet met with a high-level North Korean delegation that arrived on Tuesday to press for the release of the citizen in custody, and for the body to be handed over.

Health Minister Subramaniam Sathasivam told reporters he was not at that meeting, but a decision would eventually be made on what to do with the body as no next of kin had come forward for formal identification.

North Korea maintains the victim is a North Korean citizen, but denies he is the half brother of its leader, Kim Jong Un.

South Korea’s foreign minister told a U.N. sponsored disarmament conference in Geneva on Tuesday that its unpredictable, nuclear-armed neighbor had thousands of tonnes of chemical weapons, including VX.

Yun Byung-se called for “collective measures” against North Korea, including possible suspension of its U.N. membership.

North Korea’s envoy to the conference, Ju Yong Choi, rejected the suggestion as “despicable” and said the country has never produced or stockpiled chemical weapons.

The country’s official KCNA news agency later said the claim that VX was used to kill its citizen was “absurd” and lacked scientific basis, calling it an assertion made by the United States and South Korea to tarnish the North’s image.

Security camera footage, which has been broadcast in the media, showed two women assaulting Kim Jong Nam at the airport around 20 minutes before he died.

Both women have told diplomats from their countries that they had believed they were carrying out a prank for a reality television show. Indonesian diplomats said Aishah told them she was paid around $90 by whoever tricked her into taking part.

Malaysian police have said the suspects had washed their hands after the assault, and were aware that the liquid smeared on their victim’s face was toxic.

Aishah’s lawyer, Gooi Soon Seng, was granted a gag order to restrain police and potential witnesses from making public statements that may incriminate his client.

Police detained Huong 48 hours after the murder in the same airport terminal where Kim Jong Nam was killed. They identified her as the dark-haired woman wearing a white shirt emblazoned with the acronym “LOL”, whose image was caught by a security camera while waiting for a taxi after the attack.

Appearing in court on Wednesday, Huong wore a yellow shirt and blue jeans, and her wavy hair was dyed blonde.

Aishah was caught a day after Huong. Police said she suffered a bout of vomiting while in custody that they said was due to side-effects from exposure to VX. Indonesian diplomats who visited her subsequently said she was in good health.

In court, Aishah indicated that she understood the charges against her. Wearing jeans and a t-shirt, her solemn face framed by long, dark hair, Aishah nodded to Indonesian embassy officials as she left the courtroom.

“We hope that she gets a fair trial, afforded all her legal rights and not tried by the public,” Indonesia’s foreign ministry spokesman, Armanatha Nasir, told Reuters in Jakarta.

(Additional reporting by Kanupriya Kapoor in Jakarta and Jack Kim in Seoul; Writing by Praveen Menon and A. Ananthalakshmi; Editing by Simon Cameron-Moore and Nick Macfie) 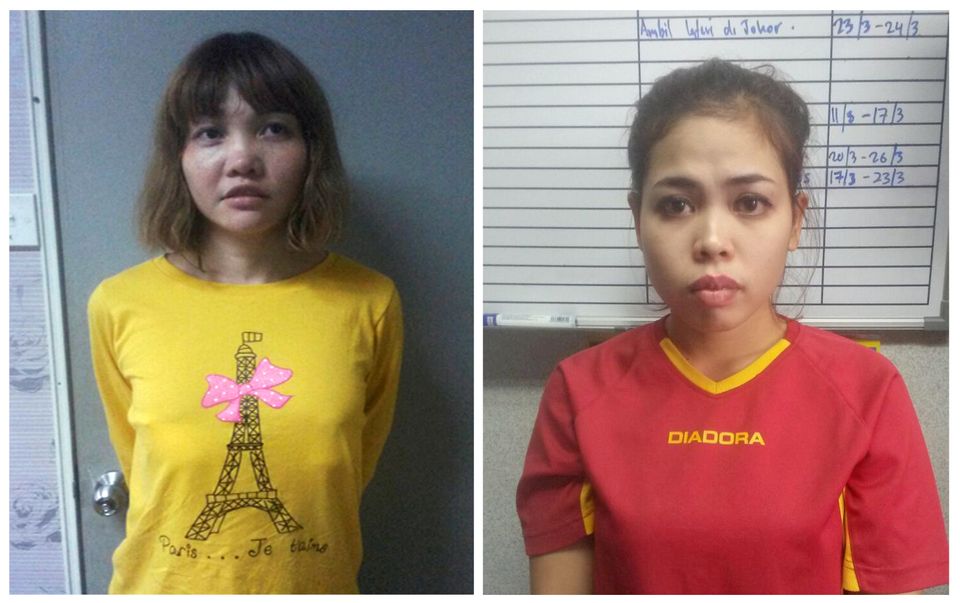 1 / 14
Vietnamese Doan Thi Huong (L) and Indonesian Siti Aishah are seen in this combination picture from undated handouts released by the Royal Malaysia Police to Reuters on February 19, 2017. Malaysia on March 1, 2017 charged both women with the murder of Kim Jong Nam, the estranged half brother of North Korea's leader.&nbsp;
Reuters