For every bit of gratitude one might feel for the gifts of the 1950s and 60s -- rock 'n roll and Mad Men, to name a few -- there's a friendly reminder that it's a good thing those eras are long gone. Take, for instance, the fact that it used to be acceptable to publicly debate whether women should be spanked for bad behavior.

This particular reminder comes courtesy of an old newspaper clipping from the New York Daily Mirror by way of the folks at Dangerous Minds, who posted an image of it.

In the newspaper column, pictured below, readers are asked to bat around what was an apparently an issue back in the day: "If a woman needs it, should she be spanked?"

If the posing of the question wasn't questionable enough, the responses the paper selected for publication all answered in the affirmative.

"It teaches them whose boss," one Teddy Gallel wrote in. "A lot of women tend to forget this is a man's world and a lot of men who who stepped down as boss of a family wish they hadn't."

Other justifications included, "Most of them have it coming to them anyway," which came from one William Davis.

And then there was Frank Desiderio, a barber by trade, who didn't just approve of spanking a disobedient women "when she deserved it" but offered up the tip that a hairbrush is a suitable tool by which to do so.

"I can't knock the idea," he wrote. "In my business, a man sets a lot of store by the results he can get with a hairbrush properly applied."

Adding insult to injury -- per the note at the bottom of what was apparently known as the paper's "You Said It!" column -- the writer of the query earned $10 for having it published.

One Jezebel commenter wondered if the clipping may be some kind of hoax. While Dangerous Minds seems to have been the first to publish, it has since picked up more attention on Buzzfeed and other sites, though none of them include more details on its origins.

Another Jezebel user countered the assertion that the clipping my might be fake by pointing out that, historically speaking, the idea of spanking women wasn't altogether uncommon: She included a link to The Society Pages, which collected a gallery of images portraying women being spanked in advertisements for films and in comic books.

"Lady spanking is a manifestation of the infantilization of women," Lisa Wade, a professor of sociology wrote in the post that accompanied the images. "The idea that they are not men’s equals, but are expected to obey them as subordinates and can be punished when they do not behave."

Gothamist, for one, speculated that the clip might serve as evidence for why the Daily Mirror no longer exists.

"The New York Daily Mirror started in 1924 and ceased publication in 1963; this clip seems to be from the late 1950s, and perhaps gives an indication of why they didn't last through the '60s." 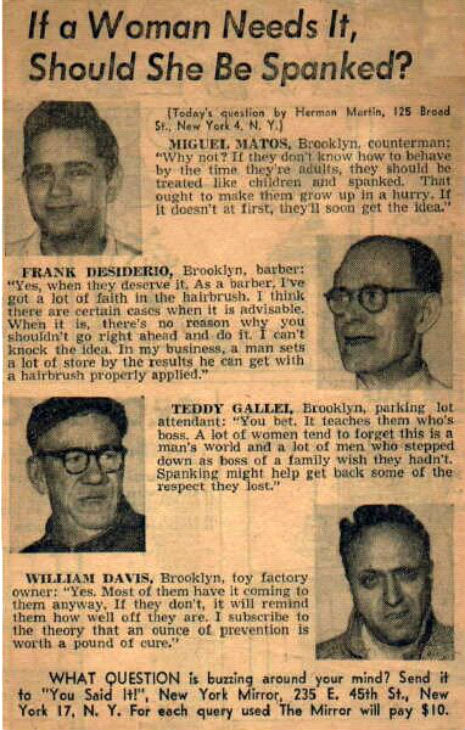 CORRECTION: An earlier version of this article stated that the men whose responses to the spanking question were published received $10 from the paper but only the writer of the query was compensated.