When was the last time you saw a group of mid-life women dining out at a restaurant? Maybe they were at the table right next to you, but you never noticed them. If a woman in Los Angeles is single and over 50 the message the city gives her, both personally and professionally is, "Get out of town."

As a woman in my 50s, walking down a city street, I feel invisible to almost any man walking past me. I've been that unseen woman over and over again. Friends have echoed this experience to me as well. Single? No one wants to date a midlife woman either. Check the world of Internet dating, where most men, no matter what their age, list themselves as only interested in women up to 44 years old. A friend turned 46 and wanted to try online dating. I told her the age range factoid and instructed her to, "Pick an age from 40 to 44. Then just do the math when they ask questions about your childhood." 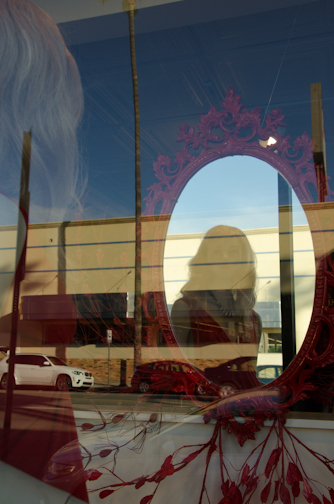 Even though he doesn't realize it, deep down in his lizard brain, when a man asks a woman how old you are, they really don't want to know your age, they want to know how many eggs you have left. Fifty-year-old females have passed their child bearing years. Yet middle aged Peter Pans wake up with thinning hair and expanding waistlines to find their female contemporaries no longer desirable, because their wombs have no prospective residents. Those men believe their future namesake will be conceived by the supermodel they just haven't met yet.

A 58-year old date of mine who had an 8-year old son AND an 8-year old grandson, told me he wanted a woman he could have a child with. So, after me he dated someone who was 39. He said, "I would have picked someone younger, but I promised my 38-year-old daughter I wouldn't date anyone younger than her."

Sure, he's only one guy, but women my age who still want a male partner may feel ignored by the compulsion of biology for men to mate with someone who can procreate.

When I saw the 2004 film, Door in the Floor, midlife beauties (then in their late 40s) Kim Bassinger and Mimi Rogers had sensual nude scenes. I admired their bravery and exemplary figures. Meanwhile, the audience gasped with the same surprise and amazement as the special effects moments from a Star Wars film. What will audiences think about Jennifer Aniston in 10 years?

Lauren Hutton (now 69), supermodel to my generation, posed nude at 62. She said at the time: "It's really important that women understand not to listen to a 2,000-year-old patriarchal society." She added, "There once was a proverb that said, 'It's the old fiddle that plays the sweetest music.' Also, most women my age have great taste in music, growing up in the first era of albums and turntables, music stores and The Beatles.

Inspired by my unnoticed peers, I wrote a novel, The Last Place She'd Look about a woman turning 50, her efforts to become noticed in the world, and ultimately to find happiness and a fulfilling relationship, but not without some mishaps and ego bruising along the way. In trying to console my female friends by presenting a literary figure they could identify with, it seems male readers said the book spoke to them. Now I have a whole crew of men who view me with different eyes.

When I think of female contemporaries I wonder, why is a woman who is confident, with a self assured sexual ease, invisible, ignored and undesired on her local landscape? Is it that men and boys want naive girls they can control? Should we ask George Clooney?

A woman past 50 is experienced in giving and receiving pleasure; grateful when understood and appreciated. She is like a classic car, a fine wine, or an imported cigar. The engine hums, with a complex taste and a smooth relaxing smoke. It's a sharp, insightful and lucky man who can appreciate the passion, depth and beauty of a seasoned, sensual woman.

So the next time a man sees me or any of my mid-life female friends out in the world, he should LOOK AT US. Then smile and say, "Hello." He'll be in for an astonishing surprise.

PHOTO GALLERY
Where To Meet Singles Over 50

1 / 5
New Blood At The Party
Sometimes it feels like the foundation of your social life is so strong that you no longer find the opportunity to meet new and exciting people. Throw a barbecue or party in which guests bring a friend that no one in the group knows. Alternatively, tag along with a friend the next time their office has a company picnic or function -- this is a great way to meet somebody who you know is responsible enough to hold down a career and who you can 'check out' with an acquainted friend before you agree to a date.
Alamy