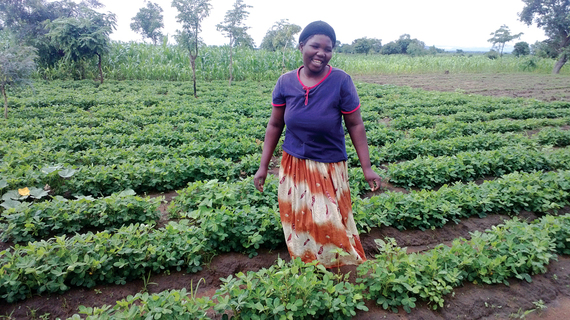 In attempting to understand the conditions in which women around the world live, we have come to realize that much of the information about women simply is not available. We are missing nearly 80 percent of the data on their empowerment. That missing information ranges from women's access to credit to the average number of hours women spend on unpaid work. Millions of women - especially in developing countries - are still living in the shadows.

This absence of a full picture of women gains special importance in light of the adoption of the Sustainable Development Goals (SDGs) by world leaders last month. By envisioning an approach that leaves no one behind, these new goals put women and girls, who are the most vulnerable to hunger and poverty, at the center of the development agenda. This signals a transformative moment in the global fight to end hunger and a new challenge, one that not only demands action, but a new way of thinking.

That challenge is magnified by the reality of where women are and what women do all across the world. In the rural areas of Asia, Africa, and Latin America, most women engage in subsistence farming to feed themselves and their families. It has become increasingly clear that if we truly want to end hunger and malnutrition by 2030, we need to focus on women's empowerment and provide them with the tools they need to carry out their all-too-important work.

Traditionally, we have simply considered hunger the lack of food. Our development efforts have reflected that idea by focusing much of our food aid on providing sufficient calories to survive. Just as important, however, is the need for food that provides necessary nutrients for healthy lives. The SDGs have enshrined this by including malnutrition in the second goal to end hunger, achieve food security and improved nutrition, and promote sustainable agriculture.

The U.S. government has already shown leadership by committing itself to combating "poverty, hunger, and undernutrition" through Feed the Future, a global food security aid program in 19 of the world's poorest countries. This program should be a source of pride for the American people because it showcases precisely what can be achieved when aid is responsive to the specific and unique conditions on the ground. However, ensuring the sustainability of such successful efforts as Feed the Future requires not only political action here at home, but a solution to the data gaps we find across the globe. We desperately need that information. Without it, the path of fighting hunger becomes much more difficult to navigate.

Therefore, immediate next steps on that path must be to understand what we do not know about women, their status, their needs, and their role in ending hunger and poverty. What we do know is that nearly half of the world's smallholder farmers are women, with higher rates in the developing world - where the data gaps are most severe. Yet, development aid for agricultural production has until recently, traditionally focused on men. The Women's Empowerment in Agriculture Index is beginning to fill in the gaps of the missing data.

There is no doubt that the new SDGs are exciting - and achievable. But with the information gaps about women worldwide, we run the risk of forgetting the critical intertwined nature of ending hunger and gender equality. Though those two SDGs goals are listed separately, we simply cannot address one without addressing the other. Ending hunger can only be achieved if women are pulled out of the shadows and are empowered. With the reality of poor women playing such a large role in agriculture, nutrition, and food security, any other approach misses the point entirely.