Chattanooga's 2016 GroundBreakers Storytelling Series began with a session on immigrants. Introduced by entrepreneur Denise Reed, three women who immigrated to Chattanooga shared their stories, followed by Dr. Lisa Clark Diller, Chair of History & Political Studies/ Southern Adventist University. Diller explained, "Historians collect stories over time and then try to draw conclusions about them, so I hope to make some general observations here about women and immigration in Chattanooga--which are set in the larger U.S. historical context."

The Storytellers
Dr. Mbakisya (Mbaki) Onyango who was born in Tanzania, a country in eastern Africa that has 120 dialects, where the national language is Swahili and English is business language. She received her bachelor's degree in Civil Engineering in Tanzania and her masters in Transportation Engineering in England. she obtained her Ph.D. Transportation Engineering in America as a single mom, vice president of African Students Union, and the outstanding Ph.D. student in her class. When her husband died in a car accident, she raised two sons by herself, making sure that she and the boys got a good education. After graduation she joined UTC as assistant professor of Civil Engineering and was voted SGA Outstanding professor. She also advises National Society of Black Engineering (NSBE) which gives free ACT workshops to high school students in Chattanooga.

Jessica Oliva-Calderin was born in Peru and immigrated to the Miami Beach area as a child. Her high energy and risk-taking attitude have shaped her innovative career in the legal profession. A resident of the Chattanooga area since 2005, she has successfully built an immigration law practice with her husband in three different states. Empathetic with her clients, she provides services tailored to their needs.

Nasera Souidi-Johnson was born in France of parents who had immigrated from Algeria in the early 1960s. Her mother spoke no French. Immigrants must have Courage, conviction, and commitment to be successful. She is an advocate of global education, culture, and business. Nasera is the founder of the French-American Chamber of Commerce and is heavily involved in the Chattanooga community. 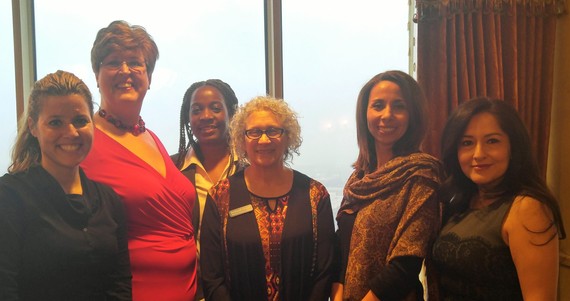 Historical Context
Lisa Diller began the early history of immigrants to Chattanooga with the European Americans who replaced and deported/exiled the Cherokee. After the Civil War, the migrants were primarily African-American. In 1870, more than 500 of the 17,000 residents of Hamilton County were foreign born, mostly from Europe. By 1890, 2,000 of the 29,000 people in the county came from Europe with migrants from China, Japan and India added to the mix. The Asians were all men, probably brought here to help build the railroads.

Immigration declined after WW I until the 1965 the Immigration and Nationality Act which emphasized family reunification, increasing the number of women immigrants. "In the 1970s, Chattanooga, along with the nation, was at its low point for immigrant citizens. Yet, foreign born citizens gradually increased, many of whom came for education or specific jobs. This time, women came in larger numbers and filled highly-trained jobs as teachers, professors, medical practitioners and religious leaders." The migrants' diversity increased, with many coming from the former Soviet Union and, more recently, from Asia and Central/South America.

Today, highly skilled people are coming from around the world for education and jobs in Chattanooga. Diller noted that, "According to the 2010 Census over 5% of Tennessee's citizens are foreign born, which is all all-time high, though well below the national average. Two-thirds of them have a high school degree or higher with 30% of them having a bachelor's or higher. Two-thirds work in management, science, arts, business, sales and office work. Highlighting the stories of women immigrants to Chattanooga reminds us of the varied lives women of all kinds live in our community as well as our international context, even in small-city Tennessee."

Audience Response
Many attending the event have been in the South for generations. They were inspired to share their own stories, "We cherish our immigrant roots as well as the freedom of being American." The positive aspects of growing numbers of new immigrants were emphasized. "They are making this a wonderfully diverse place with their hospitality and tolerance. Chattanooga's cultural scene has been enhanced and with 77 languages now spoken in the area, the education system has expanded to raise awareness of the world's interconnectedness." Last, but not least, there was a nod to the food, one of the South's most beloved traditions, "Great ethnic restaurants - Food Fusion!" Immigration has added value and richness to the city of Chattanooga.