If you look at mild forms of online harassment these days (like name-calling), you'll find that young men and women actually suffer at roughly similar rates. But don't for a second let that fool you into thinking the Internet is an equal playing field for men and women alike.

Yes, in a survey released Wednesday, the Pew Research Center did find 50 percent of young men and 51 percent of young women -- "young" being defined here as aged 18 to 24 -- say they have been called offensive names online. And men were more likely to report being "harassed" online than women, by 44 percent to 37 percent.

But Pew also found that young women face vastly higher rates of online harassment in two of its most intense, dangerous and emotionally disruptive forms: sexual harassment and stalking. 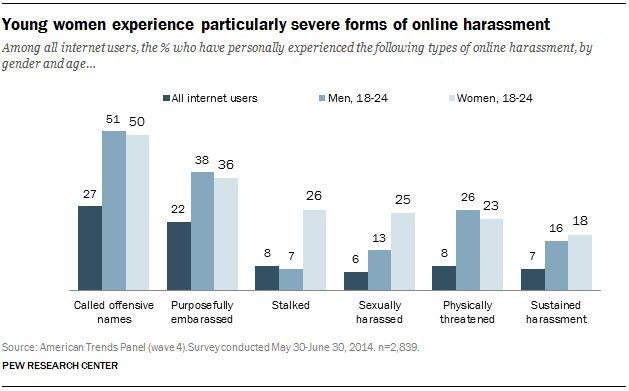 Both young men and young women deal with vastly higher rates of online harassment than Internet users as a whole. (Source: Pew Research)

The stalking numbers, at least, are in line with some other statistics about stalking: Just a few years ago, The National Center For Victims Of Crime found that about 25 percent of women become victims of stalking at some point in their lifetime.

And the survey results might not even tell the full story about just how much worse online harassment is for women than for men. Slate's Amanda Hess argued that the survey did not do a great job defining words like "harassment" and "stalking."

When asked to elaborate on their experiences, poll respondents had widely differing views of what constituted harassment, but all of those responses were given equal weight, Hess noted. For example, one anonymous poll respondent considered being labelled racist a form of harassment, and the survey gave that anecdote the same weight as a rape threat.

"Is being called a rape apologist the same as being threatened with rape?" Hess asked. "No, but it’s all harassment here."

One thing we do know is that women take harassment more seriously than men. Thirty-eight percent of women reported that their harassment was "extremely or very upsetting," while only 17 percent of harassed men felt the same. This is perhaps another clue that women are facing more extreme harassment than men.

For the survey, Pew asked 2,849 people over the Internet about their personal experiences with online harassment. The survey was conducted between May 30 and June 30 of this year.