Despite massive strides, women still lag behind in America.

Women have caught up in education and employment but still earn significantly less than men, and are more likely to live in poverty, according to a White House report released on Tuesday (scroll through for charts).

Using publicly available figures culled from several different government agencies, the report, "Women In America," is the most comprehensive on the lives of women in almost 50 years, according to the White House. Released to mark the beginning of Women's History Month, it charts dramatic changes in income, education, employment, health and crime.

"Women have made enormous progress on some fronts," Valerie Jarrett, chair of the Council on Women and Girls, and Christina Tchen, chief of staff to the first lady write in the report:

"Yet, these gains in education and labor force involvement have not yet translated into wage and income equity. At all levels of education, women earned about 75 percent of what their male counterparts earned in 2009. In part because of these lower earnings and in part because unmarried and divorced women are the most likely to have responsibility for raising and supporting their children, women are more likely to be in poverty than men." 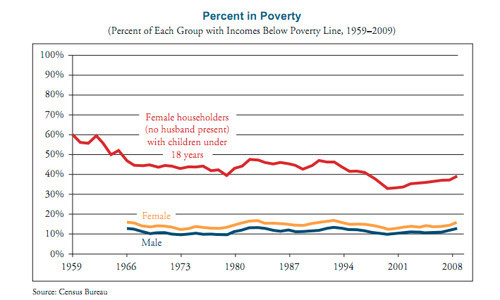 Traditional roles have changed drastically over the last 50 years, with fewer women getting married and having children, and many waiting until later in life to start families, the report found. Women are also more likely to participate in education and more likely to graduate than men. There are also more women in the workforce than there were decades ago.

Due to staying in school longer and increased participation in the workforce, the report found women are now more likely to have children at age 30 or older. Around 24 percent of first time mothers were over the age of 30 in 2007, compared with four percent in the 1970s.

But despite these advancements, many old problems remain. Women are still more likely to work in fields with lower wages, and are more likely to use those lower wages to support entire families alone, making it more likely that they also live in poverty. This statistic has stayed almost constant since 1966.

Men were harder hit by the past four economic downturns than women, with unemployment rising by 7.7 percent for men, compared with 4.4 percent for women, a difference analysts said pointed to the existence of a "mancession."

According to the report, this is mainly due to men more likely to working in sectors of the economy most hit in an economic downturn, like manufacturing, production and construction. 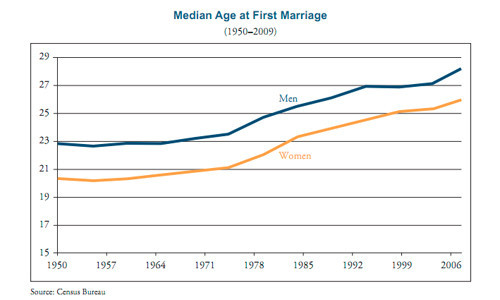 Women have lower levels of physical activity than men, according to the report, and are more likely to suffer from mobility impairments, arthritis, asthma, depression, and obesity.

Finally, while women are less likely to be the targets of violence than in the past, they are still more likely to be stalked or suffer violence at the hands of a partner. The report showed a 60 percent decline in the number of reported rapes between 1993 and 2000, and homicides decreased from 0.042 per 1000 women in 1993 to to 0.023 in 2000. 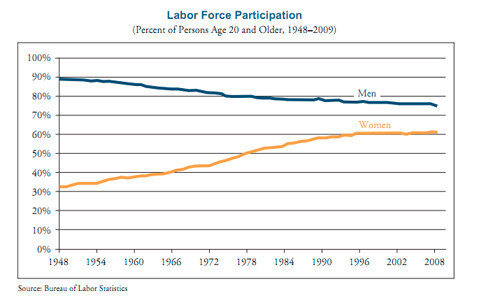 The report follows the 2009 creation of the White House Council on Women and Girls, designed to help government agencies and departments make sure women have the same opportunities offered to men.

"The White House Council on Women and Girls has supported Administration efforts to ease the burden of going to college; increase the number of girls interested in science, technology, engineering and math; and promote equal pay for women," Jarrett and Tchen wrote in the report. "We also fought for passage of the Affordable Care Act, which provides health insurance to millions, and coordinated an unprecedented government wide effort to end violence against women and girls." 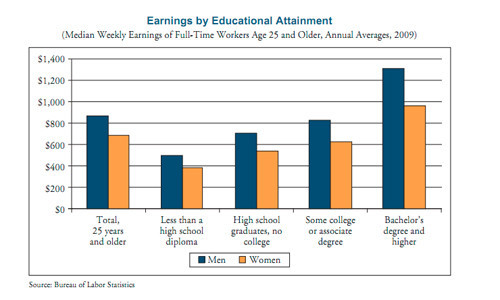