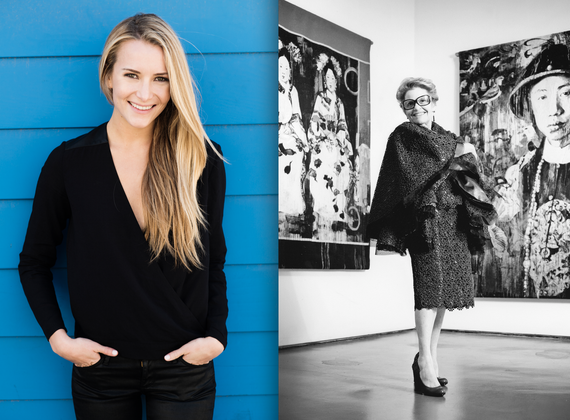 I recently had the pleasure of previewing a brilliant new documentary entitled BERNICE by first time filmmaker, Kristina Sorge. This short format documentary tells the story of art world pioneer and instigator, Bernice Steinbaum. In this beautifully crafted documentary, young Ms. Sorge highlights her subject's lifelong efforts to support and empower female artists as well as artists of color throughout their careers. The personal obstacles and hardships faced by artists she so staunchly represented were amplified by the racial and gender inequality of the art world especially during the 1970s and 80s.

As a gallery owner in Manhattan and Miami, Ms. Steinbaum became a mentor and advocate for her artists and assisted them in gaining major museum exhibitions, prestigious awards and worldwide recognition. Through Ms. Sorge's creative lens, Bernice's story is also elevated to high art. The documentary is already a contender for Best Short Documentary as well as the Audience Favorite Award during the upcoming Hot Docs Canadian International Documentary Festival (April 23 - May 3). Therefore, I could not resist convincing the film's director and producer to grant me an interview on the making of her debut film -- BERNICE.

1) Besides the fact that Bernice Steinbaum is a "bad-ass" as well as an iconic figure within the art world, why did you feel she was the perfect subject for your first documentary film?

Walking into Bernice's world felt as if I was living out a scene from Alice in Wonderland, and meeting Bernice is thus best described as falling down the rabbit hole. It was one of those experiences where the instinct to capture this tiny, powerhouse of a woman on film was just instantaneous. Bernice is an incredibly vibrant character and just as big in presence as she is small in stature. A true Queen of Arts. I immediately fell head over heels in love with her.

2) I can imagine it is very difficult for anyone in the sequestered art world to share their personal stories, how did you convince Bernice to let you into her world?

I was possessed, ha! After meeting Bernice I flew back to NYC and could not stop thinking about her story and the artists she helped discover. I told Bernice that I was no different than any of the other female artists she had encountered in her career, and I wanted a chance to make my mark. The doors opened right up!

3) How long did it take to shoot this documentary?

From beginning to end, it took a total of 8 months. We had no choice but to hustle because in production time is money and we didn't have a lot of it.

4) This is a very intimate documentary, how willing were people to talk to you about their experiences working with such a legend?

There were, of course, some setbacks. Throughout filming I found out very quickly that Bernice did not like to talk about herself. I realized she has always been a behind-the-scenes type of gal, so any emphasis put on her life or accomplishments was immediately shutdown. Seeing that the film was indeed centered on this amazing woman, I relied heavily on what other people and artists had to say about her. I recall one artist asking me over the phone, "How is it that this story has not already been told?" In other words, people were more than willing to share their stories and experiences working with Bernice -- as you can imagine, some of them were rather hilarious. I wish I could have included them all!

5) It is often said that documentary filmmakers attempt to make sense of things in their own lives through their work -- did you feel yourself relating this during the making of this documentary?

Growing up in Jackson Hole, Wyoming I was always filming or goofing around with a camera (I mean, what else is there to do?) However, I never fully realized that this was my passion until I met Bernice and then something just sparked and there was no turning back! This project allowed me to cultivate the artist within myself. Through this process and hearing stories from different artists along the way, I gained a whole new level of assurance and aspiration to see this story through.

6) Were there any rules you set by yourself or Bernice about what you would or wouldn't discuss on camera?

The only rule given by Bernice was that we filmed her from her good side. And no nudity. Apart from the artwork.

7) Was there anyone who refused to be filmed for this documentary? If so, did you simply accept their decision or did you try to convince them into being filmed?

More and more artists were coming out of the woodwork and asking to be included in this film. One artist flew to LA just to participate! At that point I knew we had something. Due to budget restrictions and scheduling, we could not film all of the artists, but I do hope one day their voices can be heard.

8) What's been the response as you begin submitting the documentaries to various film festivals, distributors, etc.?

The only negative review I've received is that people want more Bernice! As a first time filmmaker, I hope by touring the film festivals we will find a home for the film and/or further funding to turn this short film into its full potential! The film will premiere at the 2015 Hot Docs International Documentary Festival this month, so it will be exciting to see how people respond.

9) After having the privilege of watching this documentary in it's entirety, I will admit it left me wishing it were a full-length documentary. Besides budget constraints, why did you choose the short documentary category?

I was a first time filmmaker and female director who was merging into an incredibly competitive industry. Now that I've learned to produce and direct a short film, I've acquired the skills to make this into a feature, which I hope to do while also focusing on other areas of interest.

10) The movie is filmed and scored masterfully, how did you organize such an amazing team?

I have to hand it to my younger brother, Andrew Sorge. Not only did he pour his heart and soul into scoring this film for me, but he also helped in connecting me with friends and friends of friends who were in the industry. You are only as good as those you surround yourself with, and I am incredibly humbled by the amount of talent that was present.

11) What does the star of the film think of the documentary?

After Bernice watched the film she called me up and said, "I have not stopped crying" and I, being a nervous wreck, asked, "good tears or bad tears?" and she responded by saying, "Next time I promise not to be such a pain in the ass". So that was a good sign.

12) If you could go back and change one thing about the documentary, what would it be?

I would have gone and filmed in Cuba with Cuban artist, Maria Magdalena Campos Pons.

13) What can we expect to see next from Kristina Sorge?

I'm currently writing a screenplay, but anything is possible! I'm most inspired to tell powerful stories about the human experience in hopes to inform and change the way people see the world.