The highly accomplished and noticeably homogeneous panel consisted of soprano Lauren Flanigan, Performa founder RoseLee Goldberg, Creative Time president Anne Pasternak, visual artist Laurie Simmons and former ballerina Heather Watts. Sylvia Ann Hewlett, president and CEO of the Center for Talent Innovation, led what was to be a discussion on "the ebb and flow of the art community’s dynamic relationship with gender," according to the press release.

After two hours of monologues we reconvened, a little bit sweatier and a lot more confused about the world these women inhabit. The conversation was supposed to address how gender politics have changed in the past 62 years since Lee Krasner's first solo exhibition, yet the women seemed remarkably out of touch with a majority of young women in the art world. Read on to hear how alienating the experience was to witness, and let us know your thoughts in the comments. 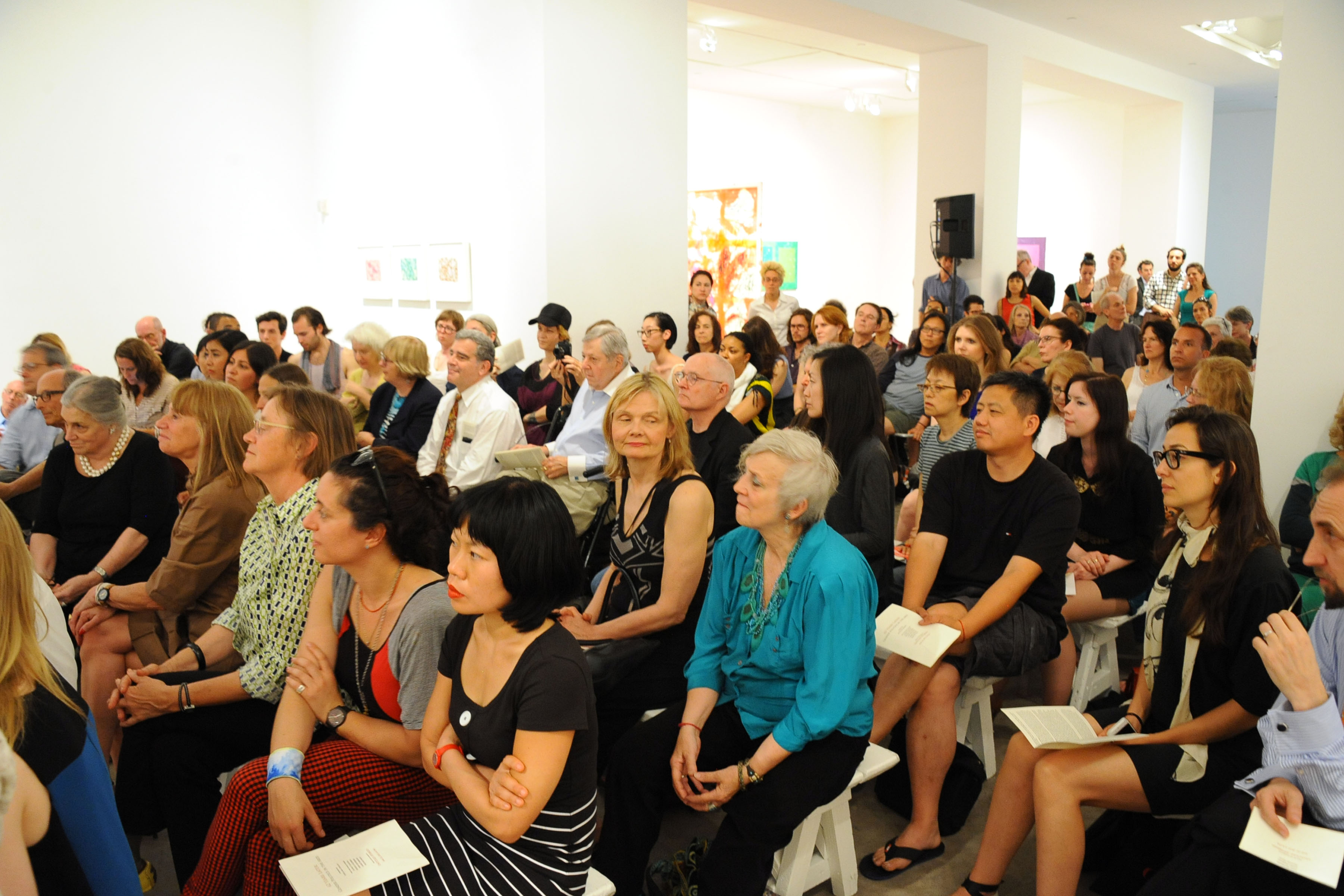 Kathleen Massara: So... Last night there was this talk.

Katherine Brooks: But only older white ladies were invited.

Leigh Silver: The takeaway seemed to be that all the women were personally very privileged and successful...

PF: Basically a lot of very successful women shared how successful they were without giving much information as to how they got there or what another woman should do to follow in their footsteps.

KB: They had very little advice for younger generations attempting to replicate their success levels, whatever that conception of success might be.

KM: Right? I really wanted some discussion of mentorship or career paths or something that was bridging the gap between generations.

KB: Particularly when they spoke about fostering their daughter's careers -- (cough, Lena Dunham, cough) -- but no one else's. 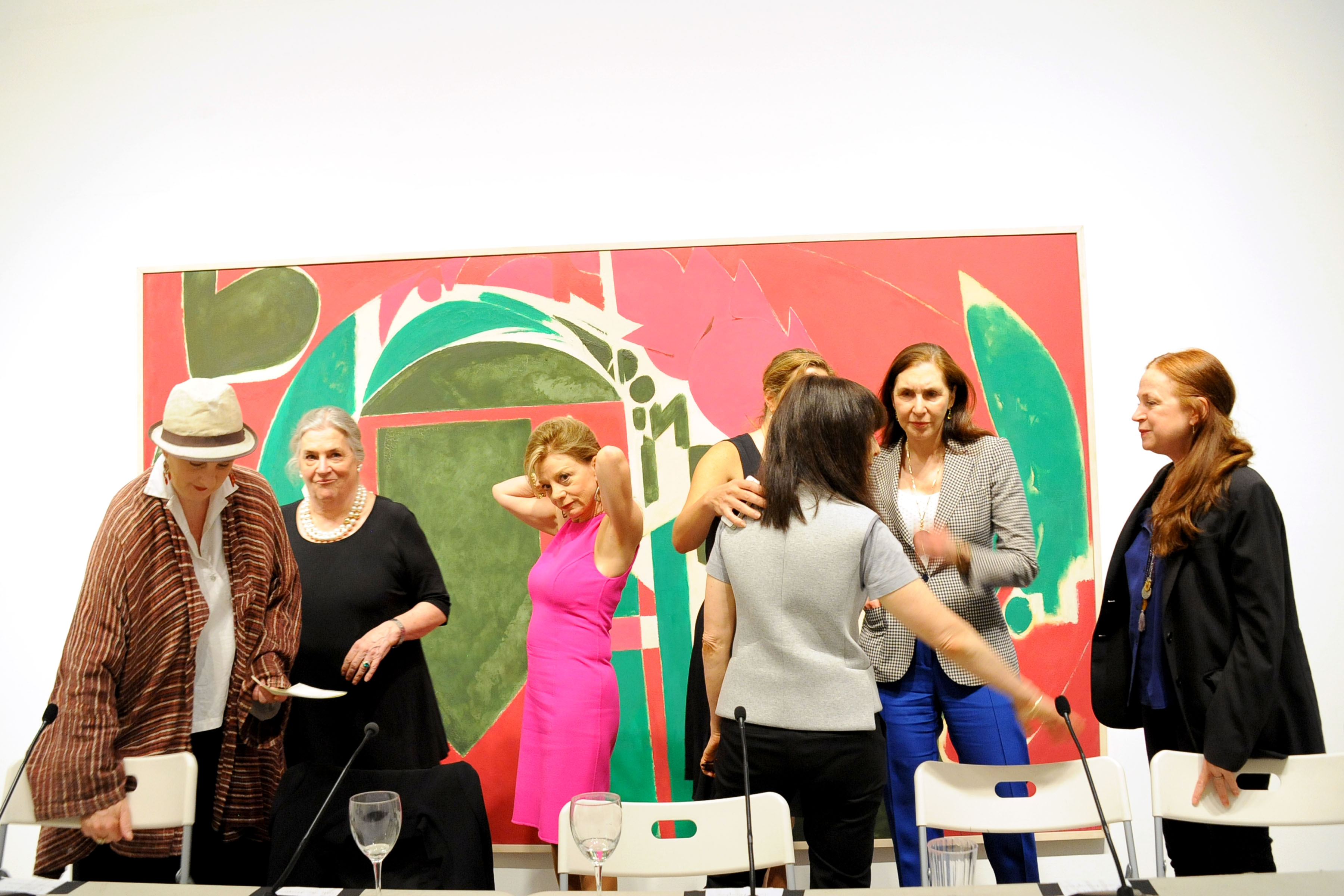 KM: What did you think of the moderator?

PF: She threw out many terms without ever defining them, like talking about how women needed more power in the arts. But what does that mean? More prestige? More jobs? More money?

LS: She should've given a little more criticism, called people out a bit.

PF: It was like everyone was patting each other on the back and then moving on.

KB: I really wanted to know what decisions these women made that brought them to the positions they are at today. Who mentored you? What institutions supported your career?

KM: So true. I wanted them to dig deeper and talk about the obstacles they encountered.

KB: You know, they did touch a bit on younger people refusing labels -- how women today are less inclined to settle into secondary roles and, perhaps, secondary titles.

KM: That was an interesting (lost) thread. What did you think of Ann Pasternak's comments on the lack of diversity on the panel?

PF: She owned up to her privilege right away which was nice (and got a nice big round of applause).

KB: She did point out what everyone was thinking. That the panel was rrrrrreally lacking diversity.

PF: I also thought they presented this delusional view of the art world as this place that is more open to gender equality than the real world, when a lot of times it's just the opposite.

KM: How is it worse, in your mind?

PF: In a lot of respects it has less women in power than men, at least in high ranking or lucrative positions. Walk into most galleries and you'll see a cute lady at the front desk and a man on the walls... I mean there are a lot of ladies in the arts but I would not say that we're ahead of the game by any means.

KM: In other words, the "gallery girls" at the front, and men in the back...

KB: I agree. Laurie Simmons at times felt too comfortable in a career that, in her words, wasn't dictated by weight and appearance. Yet citing Cindy Sherman -- one woman who can tackle art markets -- is not really convincing me that the art world has more gender equality. 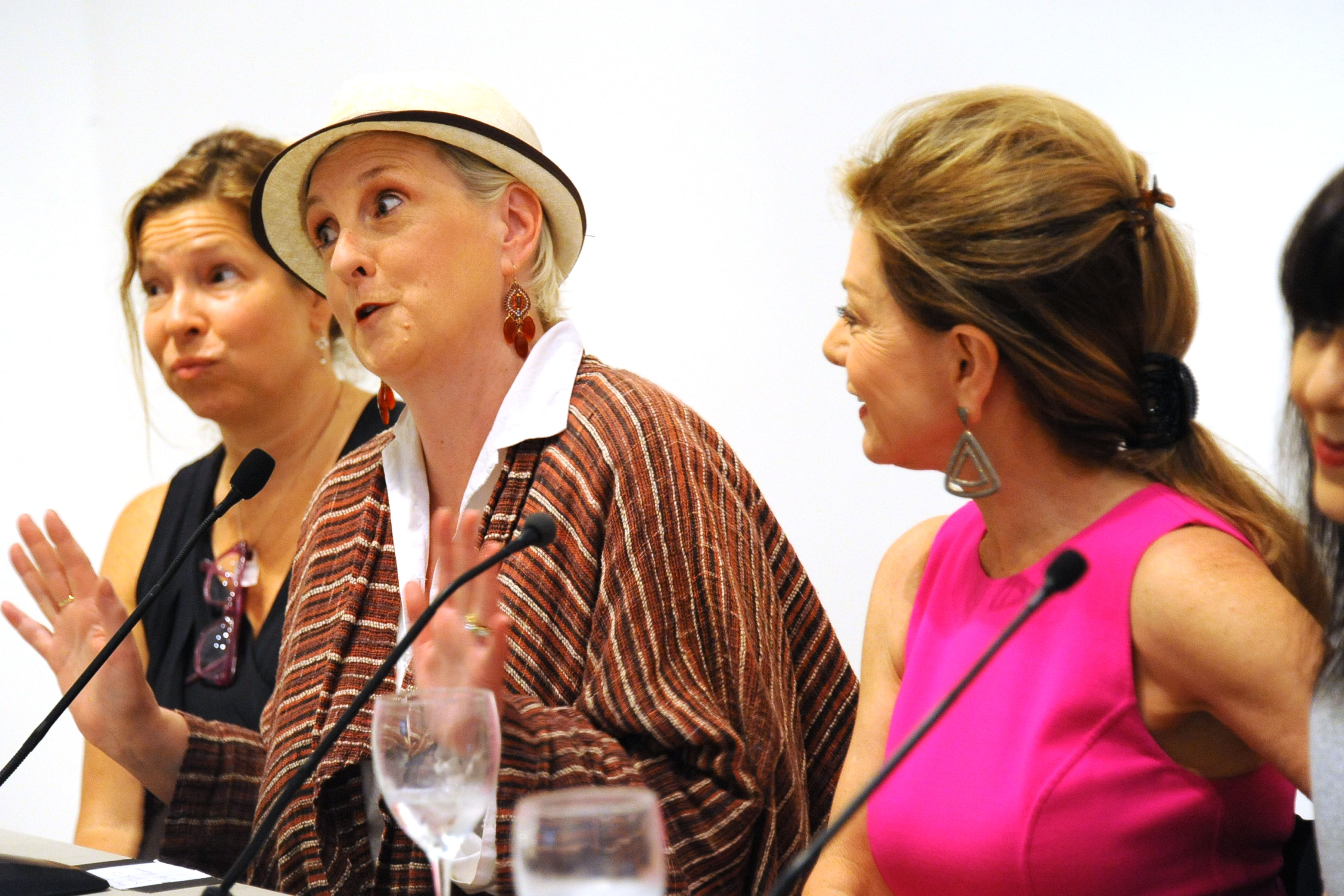 LS: Also Kathleen made a good point last night that even if there is a higher percentage of women curators, they're not the ones in the big, important institutions. And by "important" I mean the moneymaking institutions and the institutions with the most cultural influence.

KB: What was that statistic? That something like 98% of curators are women? Yet there was no breakdown of what that actually means.

KM: What do you all think about Laurie Simmons' comment about art and commerce?

KB: She kept saying that she didn't want to talk about markets and prices, but then she brought it up...

PF: It seemed like part of a different conversation. It was a fair point, but she didn't connect it at all back to women in the arts at all. So much of the conversation revolved around how women should get their "fair share" of power and money, but then to kind of backtrack and say, well money shouldn't be important... It felt out of place.

KB: I feel like this all goes back to the question, "What is power? What is success?" Which they just didn't answer. Briefly they brought up the fact that women and men tend to want different things in the workplace -- not just money and power, but purpose and collaboration. But there was no specific discussion of how the individual panelists viewed these things in their own career.

PF: That whole "what women want" talk felt extremely uncomfortable to me -- weirdly essentialist and backwards.

KM: The seven things women want, you mean? Versus simply MONEY and POWER? What would Lil' Kim say?

PF: I wish she had been a panelist.

KB: Money, power and respect! Did it seem to you guys that it was easy for these women to achieve what they have? 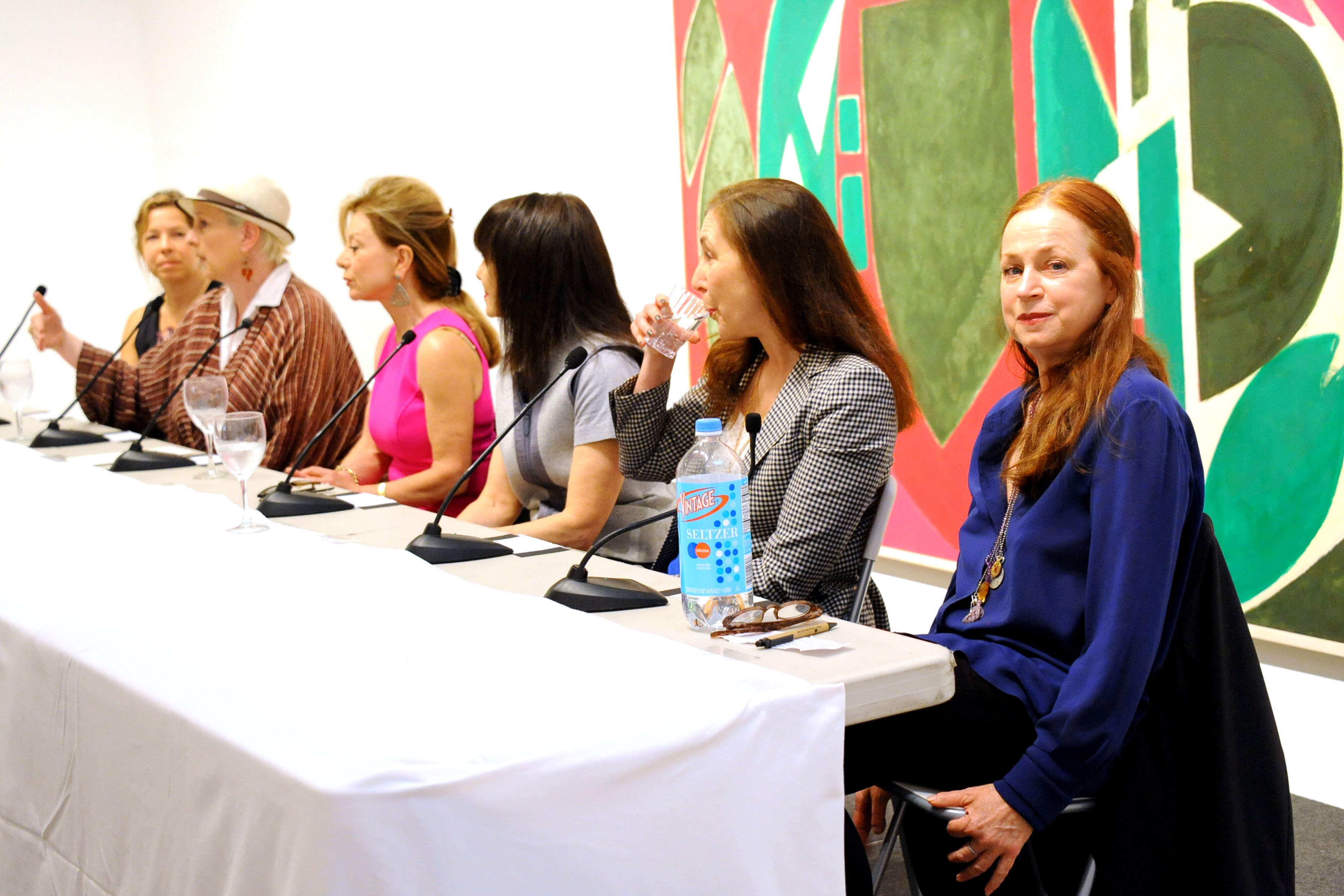 PF: Laurie talked about feeling defeated over and over, but without any specifics on how she dealt with it (besides eating chocolate). Which was a good tip, I admit.

KM: I didn't hear anybody talk about starting out, or overcoming obstacles, or what their office looks like as far as employees go and why they're there. Do you make a concerted effort to be inclusive? Do you try to foster a women-friendly workplace?

KB: Remember what the moderator said in response to Pasternak's privilege/lack of diversity admission?

PF: Oy... Something about having spent "hours" with black employees so she really understood their plight. That was laughable.

KB: It made me feel like there is a gigantic knowledge gap between the older, settled, "powerful" women and, well, us. Women who are just starting out, grappling with our own career trajectories.

KM: They also seemed to be well-connected women in general, no? The majority appeared to be pretty set up from the beginning.

KM: As for their relationship to youth culture... RoseLee Goldberg doesn't even know about Brooklyn, apparently.

KB: I heard it's the new Manhattan?

LS: She says it's "a bit like living out in the country." 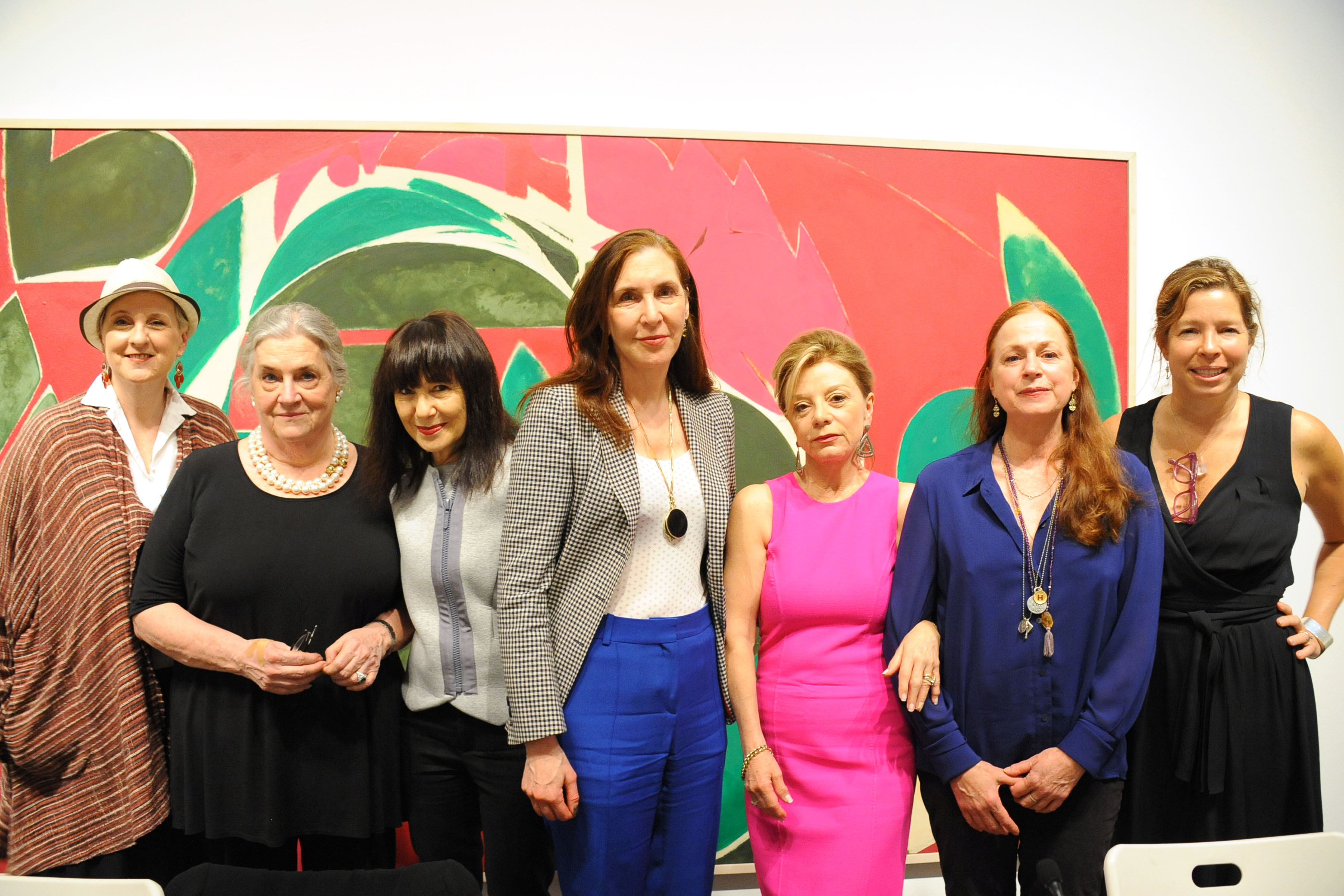 PF: Oh no! What about when Heather Watts said if you don't think you're "an ideal artist" you shouldn't pursue art?! That was probably the saddest part of the evening.

KM: I felt like aliens were explaining the world to me.

KB: In designer clothes, in a Chelsea gallery...

KB: Sisterhood isn't sisterhood without mentors actually looking out for the next generation.

KM: LIFT AS YOU CLIMB!

LS: It was so incredible to have all those powerful women in one space. It would've been really meaningful to have had something to connect to there.