In 2014, we saw amazing strides and accomplishments made by women throughout the art world. No matter where you looked, there seemed to be women artists, curators, collectors and entrepreneurs making their impactful presence known. When I personally look back at 2014, I can't help but remember all the studio visits, solo and group shows featuring amazing contributions by women. However, there was one woman toiling away in her creative studio in the heart of Chelsea in New York City, not creating her own art, but molding and changing young lives. Meet Cyndie Berthezene of Time In Children's Art Initiative -- Woman of the Year! 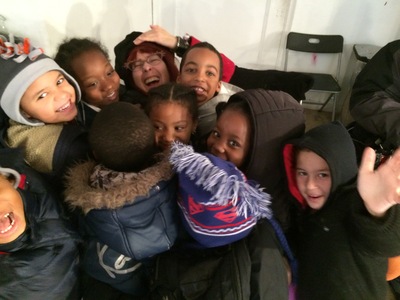 1. When and why did you originally start Time In Children's Art Initiative?

In 2006, Time In grew out of HiArt!, which was an "introduction to high art aesthetics for little kids" that I created in 1997 for my own daughter. There's a description of what it was like on the HiArt! website. You had to see me with my shopping cart, art supplies, boom box, TV, hopping in and out of taxis. I was working with two year olds and even younger kids -- teaching them full operas, going to all the big art shows and making art in the studio.

Then in 2000 HiArt! became Best Children's Arts Program in New York Magazine and people were coming from all over the world. I began offering scholarships to kids so that children from different financial situations could have the same authentic experiences in the arts. It was great!

By 2005 it became overwhelmingly clear that endless numbers of kids from even less fortunate circumstances were not having the opportunity to come. Their parents were not sitting around saying, "My kid needs to learn opera." They had other concerns, so I decided to circumvent the problem and create the same program for kids who weren't even headed my way. Not a program for poor kids, but the exact same program that our children were experiencing. To be effective it needed to happen during school hours, so that every kid could participate and so the arts would be given pride of place -- just like regular schoolwork. No special pullouts: every kid on the grade level. And it had to take place OUT of the school building: either at my studio or out at museums and galleries, so that kids could get a true sense of what New York is all about -- as equal participants.

Why? How can we talk about the future of our city or our country without taking care of and nurturing all of our children? WHO in their right mind, Malcolm, can accept the neglect of thousands of children's aesthetic and intellectual development because, for whatever reason, their parents don't have money?

Children need the chance to develop and use what they have. Eight years of working in Harlem and the South Bronx has shown me how much these children have, and how little we are cultivating their intelligence, skills and talents. At Time In we teach way up to the skies, and kids are so proud of their accomplishments. We teach them what they need in order to excel and they recognize their own excellence. It's very powerful.

2. How do you identify the schools and children most in need?

When I started the program I just went online, found the most challenged elementary school I could find that was a straight shot down the West Side to my studio and got them on the phone. The kids were fantastic, but troubled. Little kids would go on rampages, lash out at their classmates, trash classrooms. It's hard to imagine how over the top this school was.

I remember that we had a meeting in September and one of the teachers asked me what they could expect as a result of this work. She was skeptical, but, by the end of the year, she was the biggest fan. She changed schools in Harlem and immediately had the new school call me. Then our pre-K teacher, Emma Markarian, left Harlem for a school in the South Bronx and the same thing happened. 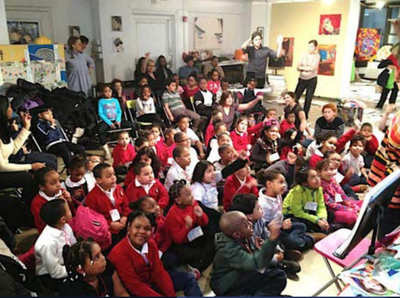 Time In Studio Session / Reading Hans Christian Anderson
3. How do you persuade the schools as well as the parents of the kids to participate in Time In?

In the beginning this was complicated. But now our reputation precedes us. There are 10,000 plus pictures of kids working, succeeding, and smiling. Not to be immodest, but we do an incredible job, focusing on the needs of each individual child and parents have been very happily shocked at the way their kids are changing, focusing, behaving, cooperating and enjoying!

4. When did you realize Time In was truly making a positive change?

From the first day! If you could see the first group of kids peeking their way into the studio and moving, slowly, from violence to cooperation -- it was fantastic. At the end of our first year in Harlem, a Pre-K teacher, who had been in the school system for 37 years, said that she had never seen such a dramatic change in focus and abilities in her entire teaching career. We see it all the time. A whole class becomes motivated, caring and cooperative, as if a magic wand had been passed over them. And we see it on the micro level - kids who have serious trauma -- PTSD from things they saw before leaving Africa, great emotional stress due to domestic violence or loss of a parent, and who open up, smile, trust, listen, participate, suddenly feel cared for and functional. They bury themselves in art and take control of their internal world.

5. What would you say is over-arching tenet of Time In?

Our mission is through the arts to give kids the tools they need to flourish, thrive and hope. Kids need to know that the world is a bigger place, and that not only do they BELONG to it, but that they have something fabulous to share with it. That's a radical departure for kids in under-resourced communities. Knowing that they really count. The arts radiate possibility.

6. What are some of the obstacles you've faced recently in continuing Time In's mission?

Our greatest obstacle is money. It's hard for people to understand that to change the way kids live and work, WE also have to change the way we think about supporting and nurturing them. It takes care, inspiration, attention and money!

Right now we run the program on a shoestring. We are moving 600 kids a week around without enough infrastructure. I've chosen to keep putting dollars into programming so that we can serve the most kids possible, but at some point you need to retrench.

7. As fundraising seems to be key in keeping Time In's doors open, how do you locate donors, supporters and patrons?

So many of our donors are generous parents who have had kids in HiArt! They have lived the magic with their own kids, they understand the potential for growth, and they want to be instrumental in making it happen for other people's kids.

It's gotten to the point where I just let people know from the minute I meet them that I'm going to beg for their help! Hopefully they won't all disown me!

Time In needs angel donors willing to invest in the future. That's the only way we will be able to create durable change in the sad landscape that is home to so many of our children.

8. Are there any key supporters that have proven to be invaluable?

Absolutely. We are so fortunate that so many of our funders have stayed with us and grown with us. The Catalog for Giving, which made a major three year investment in Time In, just renewed us for an additional three years. The Lincoln Fund, E.H.A. Foundation, The Subak Family, The Harman Family Foundation, Dedalus Foundation (what could be a better honor for a program steeped in the visual arts than to be taken under the wing of Motherwell's own foundation?)

9. If you could partner with any organization for funding, collaboration or partnership which organization(s) would it be and why?

The Gates Foundation, The MacArthur Foundation, Robin Hood, The Ford Foundation, The Arnold Foundation, OSI, The New York Community Trust -- so many organizations are seeking the path to bring people out of poverty and into the world as productive, self-fulfilled adults. To change the way kids are educated so that they can fulfill their potential. And to do this with intelligence and inspiration. We're so on the money, effectively planting the seeds for the kind of change that those organizations are hoping to accomplish. In partnering with us they will not only build their own philanthropic legacy, but will effectively transform the lives of so many children, their families, their schools, and eventually their communities. Time In is not an experiment. It is smart and it works. But it requires enlightened investment and knowing that gauging the future of children is not a simple numbers game. 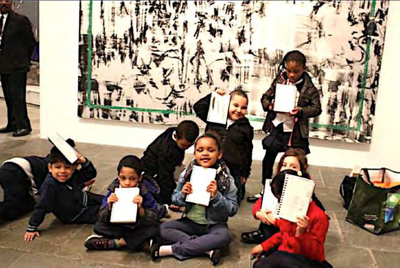 10. Time In really seems like a scalable model, do you see it branching out beyond New York City?

Absolutely. I was so touched by the kids I met in Wynwood when I was visiting the Rubell Collection during Art Basel last year. Miami would be a great place for us - there are huge art resources, a fantastic opera company, so much culture and so many kids who have no access to any of it. And, of course, I would love to work with the East Coast cities: Newark, New Brunswick, Camden, Trenton, Philadelphia, New Haven.

11. What do you believe was Time In's greatest accomplishment in 2014?

We were able to serve 200 more kids - that's a lot!. A 50% increase in the number of kids we give programming to EVERY WEEK. And we launched an incredible literacy program, Arty Readers, for the oldest of our kids - the 8 year olds.

Arty Readers is a cross-disciplinary literacy program that will transform the lives of children. It's fantastically powerful, not simply because it will help them read, sequence, follow directions, etc., but it also ensures very young children substantive learning, attention and care. Time In is inspiring children to be in school and to love to learn. In a day infused with music, art, literature and theater, what's there not to love?

12. What is the most important goal you would like to achieve in 2015?

We are looking forward to working with larger foundations and angel donors so that we can be touch the lives of more children. To make a productive, kinder America we need to build self-confident, motivated children with real world skills. The big skills that allow them to use all of their intelligence and creativity in ways that we grown-ups haven't even thought of yet. I can't wait to bring the 3rd graders up to 4th grade next year. We've got an amazing program of Shakespeare and Britten's A Midsummer Night's Dream all lined up with opera and theater and art. It's going to be off the charts incredible.

all photos courtesy of Time In