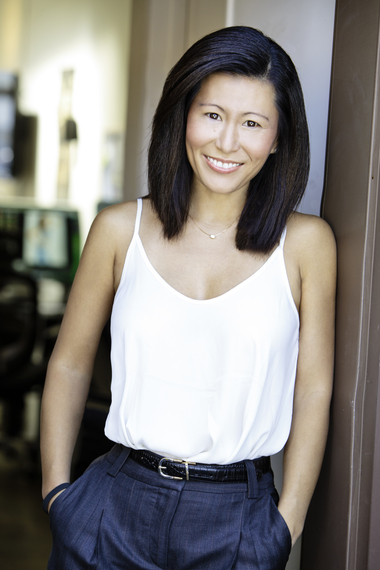 Jane Hwangbo is Founder of The Money School with Jane (a.k.a. GetYourMoneyBrainOn.com), a new online community devoted to teaching the principles of personal finance and money management to a younger generation in an engaging, humorous, and unintimidating manner. She writes blogs to illuminate connections between the public markets (stock and bond exchanges) and real life, and has produced a series of videos to spur visual learners to become more knowledgeable of the choices they are making every day toward their financial future.

Jane began her career as one of the few female semiconductor analysts covering companies for Wall Street, and then moved on to become a portfolio manager for multi-billion dollar hedge funds. She semi-retired from the institutional side of finance to become a mother to two young kids when she was in her early thirties.

How has your life experience made you the leader you are today?
I am an immigrant's daughter. My parents cobbled together the little money they had to open up a dry- cleaning business in downtown Los Angeles in the 1970's. They left for work at 6am every day, and I didn't see them again until it was well after dark. I learned independence and pluck from all of those years with my sister. There was nothing we couldn't do ourselves, from cleaning the house to applying for college. My family's entrepreneurial spirit still burns within me today. Another characteristic I learned from being part of a small but burgeoning ethnic community is that at a certain point, you can't do it all alone, and there is joy in co-creation with others. I'm a big believer in leading by doing. It's just more fun to do together.

How has your previous employment experience aided your tenure at Money School with Jane?
When I was a portfolio manager on Wall Street for multi-billion dollar hedge funds in my twenties, I learned how to make difficult choices, because outcomes are never certain. When you are doing the analysis to decide to commit hundreds of millions of dollars of capital into a single company's stock on a daily basis, you notice that there are no such things as perfect set-ups. Big decisions need to be made with imperfect information all the time. Or you'll miss it. Before making every investment decision, I spent months researching specific companies, flew to Asia to meet with management for weeks at a time, created complex financial models, exhausted hours on the phone with the company's suppliers and customers, and basically never slept. I did all of this to find the one nugget of information that gave our firm an edge. Still, there was no guarantee in outcome. My mistakes became things I learned from, but never grieved over. As the founder of a brand new online school for young people who want to engage with their finances, I'm required to make decisions with imperfect information all the time, and my experience on Wall Street has equipped me to face the uncertainty with humor and grace.
   
What have the highlights and challenges been during your tenure at Money School with Jane?
The Money School is a very new concept. We're creating a safe place where young people are encouraged to learn how to incorporate the principles of finance into their daily lives so that they can realize a stronger future. Personal finance used to be a subject that was taught at public middle schools and high schools, but generations of budget cuts have changed that. Many young people today are relatively oblivious to money management as being such an important determinant of their future mental and emotional wellness. We want to equip individuals with the skills necessary to be able to dictate their own life course. Because the concept of a Money School is so new, our team often wrestles with the fact that we're a mostly analytical bunch trying to make super creative stuff! And we often don't know what we don't know. This has been our greatest challenge. However, I almost died of pride when I saw the finished cuts of our first online video classes. Our team had written our first scripts, gone through two long days of shooting on location, hired a fantastic production crew of twenty people and a group of talented actors, and edited forty minutes of material, all within two months. What a highlight!

What advice can you offer to women who want a career in your industry?
Learn what you can, and pass it on. Whatever deficiencies you feel while rising through the ranks, take note of them. Perhaps you'll notice that there are too few support systems for women in finance, especially during the child-bearing years, or that your boss doesn't have the faintest idea of what it means to be a mother to young kids and consistently achieve the results required in your position. Create a work environment that is different when you have the power to dictate expectations, and remember the strength of empathy - everyone is human, even in our data-driven industry. You will change the industry of finance.

What is the most important lesson you've learned in your career to date?
Defining my success against other people's ideas of what success should look like in my field at any given point in time was an illusory game for me. When I was a kid, I was supposed to grow up to be an obedient wife, according to ethnic and cultural tradition, and learn to sew and cook for my future husband. I became a terrible cook and seamstress. When I was in high school, I was supposed to go to a decent college and take a low-stress job, but I decided that I would much rather attend Harvard and become a Wall Street analyst. When I met my future husband, his family wanted me to be Jewish, but I wasn't. When I was at the height of my career on Wall Street, I was expected to keep going at the expense of having a family. I "failed" at that too. The people who love you will always have very particular ideas of what would make you happy, but they're not you. Being you is the best thing you can be, at every point in your career.

How do you maintain a work/life balance?
I need a village. Our house is always frenetic, with grandparents, nannies, babysitters, and friends, all helping to juggle the impossible challenge that is my family's schedule. It would be tough to call it work/life "balance"- more like a different flavor of imbalance every day. A glass of wine in the evening has become pretty crucial to my ongoing sanity.

What do you think is the biggest issue for women in the workplace?
Companies are still not aware of how difficult it is for many talented, bright, and hard-working female employees to be pregnant, have babies, and then get through the challenging young kids phase of motherhood without calling it quits. There aren't nearly enough supportive policies in place. We need to change that, like yesterday. There is a general lack of empathy toward the challenges that women face as valuable members of the workforce.

How has mentorship made a difference in your professional and personal life?
My grandmother was my greatest mentor. She was a single mother of five kids who somehow managed to send everyone to college, and radiated an inner beauty that spilled over the outer edges when anyone met her. She showed me grace.

Which other female leaders do you admire and why?
Hillary Clinton. She's amazing! Mirga Grazinyte-Tyla, the new assistant conductor for the Los Angeles Philharmonic - an artistic phenomenon and rising star in classical music. Naomi Wolf, who wrote the Beauty Myth when I was just entering college, and rocked my world. Betty Liu, a successful TV anchor on Bloomberg News, who pulled off the impossible feat of changing careers midway through a youth- obsessed industry and has raised kids with the most loving and pragmatic attitude.

What do you want Money School with Jane to accomplish in the next year?
It would be incredibly exciting to see our audience grow as people become more aware of what we are doing. We've taken the intimidation factor out of learning finance. We're launching a library of video classes in the at GetYourMoneyBrainOn.com that makes finance funny, very Saturday Night Live in feel. The long game is to change the future of younger generations when it comes to their relationship with money. We want to build financial resilience and core strength so that people are never held hostage to their financial circumstances.