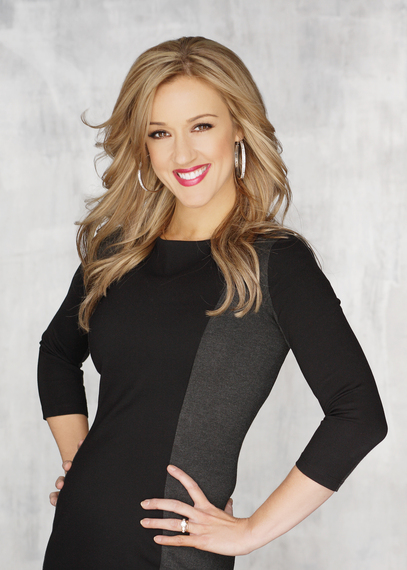 Megan Alexander is a national news correspondent with CBS Television and the author of Faith in the Spotlight: Thriving in Your Career While Staying True to Your Beliefs (Simon & Schuster, 2016). She can be seen every evening as a correspondent on the longest-running, top rated syndicated national news magazine television show Inside Edition. For the past two seasons, she covered Thursday Night Football as a special correspondent for CBS News. She has covered the last six Super Bowls, major awards shows and national political events. She serves as a guest commentator on the Wendy Williams Show and Showbiz Tonight on HLN.

Megan regularly speaks to groups and conferences - She was the keynote speaker for the Penn State Business College conference "Powerful Women Paving the Way". She sits on the board of the Hugh O'Brian Youth Leadership Foundation (HOBY). She is an Executive Producer and Actor in the upcoming feature film "Heartbeats." She splits her time between New York City and Nashville, TN. Megan and her husband are the proud parents of two sons.

How has your life experience made you the leader you are today?
My parents raised me with a strong work ethic. They were constantly challenging me to be better than I was. A pivotal moment for me was when I told my Dad I wanted to run for student council treasurer in high school. He said, "Well, that's great Meg, but what about president?" I simply had not aimed that high. After he suggested this I said, "Why not? Why not me?" I ran and I won. This mindset has helped me countless times in my career. When applying for jobs, assignments or promotions, I hear my Dad telling me to dream bigger. This was also important because I had ZERO friends in the business. My father worked in finance and my mother worked in education. When I told them I wanted to pursue a career in media and entertainment, they were very supportive but candidly told me, "We know nothing about that business, so you are on your own." This was a blessing in disguise because I've earned everything I've achieved and learned I would need to prove myself at every turn. This was empowering! I very much choose this career for myself.

How has your previous employment experience aided your tenure at CBS?
Every single job prepares you for the next - there is always something to be learned or gleaned, even if it seems unimportant in the moment. When giving a report for Inside Edition or for Thursday Night Football, I still think about one of my first internships. I was a junior in college and it was the night of the presidential election. I got to shadow a local news reporter for KEY2 News in Santa Barbara. The reporter was so kind to chat with me about the local scene he was covering. I remember him saying, "Be colorful, show your surroundings, and let people INTO the story with you." He did a good job walking and being interactive with people during his news reports. This is very much the style of Inside Edition reporting, so I still use his advice today. Listening and observing is one of the greatest ways to learn in our business. I had several radio jobs before I worked in television, and radio helped develop my voice and presentation of a story. My time co-hosting the morning show "Great Day SA" at the local CBS affiliate in San Antonio was a huge learning experience because our boss hated to script things. He liked us to be extemporaneous and adlib as much as possible on-air. But in order to make that look easy and natural, we had to research and be as prepared as possible. At the time, this format made me nervous, but I learned so much. I learned not to rely on a script or teleprompter, which comes in handy when the teleprompter locks up. It has happened several times to me during live shows!

What have the highlights and challenges been during your position at CBS?
To my knowledge, I am the only reporter to have swam with tigers, ligers and orangutans! I did this at the TIGERS Reserve in Myrtle Beach, South Carolina. I've also swam with elephants and kissed Seahawks. I have covered 6 Super Bowls for Inside Edition. Each one is an incredible but very intense week-long assignment.

My first Thursday Night Football game was on September 11th, 2014. The game was the Ravens vs the Redskins and the Ray Rice scandal was breaking news all night long. Information and changes to the pre-show were coming in fast and furious. I delivered reports for every single CBS affiliate across the country and was literally on-air for 4 hours straight. It was a sink or swim situation, and my team was determined to swim. I was very proud of the way CBS handled that game by taking on a more serious tone to cover the situation. It was a moment when news and sports aligned, and it was our job to piece it all together for the public. That's when this job is really satisfying - when we can gather information on a difficult story and deliver it to our audience in real time. And as a female, I was very proud to be covering sports that night. Thursday Night Football has been an awesome assignment for me. Americans love their football!

What advice can you offer to women who want a career in your industry?
Don't worry so much about proving yourself as a female, worry about proving yourself as a professional. Hard work and excellence speak for themselves. Come in early and stay late. Be hungry to learn. Observe. Ask questions. Be willing to step out of your comfort zone and move for a job in this industry. I have worked all over the country - Seattle, Santa Barbara, Nashville, San Antonio and now New York City. Each move was a stepping stone.

What is the most important lesson you've learned in your career to date?
When you travel, never, EVER check a bag! I don't. For the past 5 years, I only travel with a carry-on. Even if I am covering a red carpet or fancy event, I can pack everything I need in a carry-on. Learn to live and work light - it will save you time, energy and money, and you'll gain street cred with those you work with.

How do you maintain a work/life balance?
I'm not sure I do. It's a constant struggle. I love working and am blessed to have married a man who believes in me and my career goals. We are teammates and treat our family as a team. I am trying to raise my sons, who are 1 and 5-years-old, respectively, to think this way. I want my boys to see a Mom who divides chores with her husband. When I fly out of town one week, he is the stay at home parent. When he has a big conference coming up, I jump in. We try to split everything 50-50. We are constantly juggling to do this. But every now and then we look at each other and say, "Wow, when is the last time we took a vacation?!" So we try and plan ahead a little. I think it's very important to give yourself a break and say, "Hey, I may not have perfect work/life balance and that's ok. Sometimes I will be hyper-focused on work for a month or two, and sometimes I will have quality family time." I am OK with that. It's my happy chaos. Every woman and couple needs to figure it out for themselves and do what feels like a good balance to them.

What do you think is the biggest issue for women in the workplace?
Confidence. We need women to simply believe they CAN get that promotion or be the boss while having kids and a family. I want to see more women just go for it and figure out the logistics later. Guys think more this way. I have a small group of friends in NYC and we are constantly telling each other, "Dream bigger! You need to aim higher!" I want to see women go for what they want and believe they can.

How has mentorship made a difference in your professional and personal life?
I have always tried to seek out someone a few years older than me to look up to. I did this in high school and in college, and I still do this in work and in my church. It's not always a formal mentorship where we meet regularly. It could be as simple as catching someone in the office hallway and quickly asking them for advice. I try to be intentional about this and make the most of my time with people I admire. When I first got to Inside Edition, I was engaged and about to get married. I passed Deborah Norville, the anchor of Inside Edition, in the hallway and she wished me well for my upcoming wedding. I asked her what the secret to a long marriage was - she has been married over 20 years - and we had a great but quick chat. And personally, my neighbor is a wonderful woman who has raised a great son and I try to pick her brain about raising boys whenever I can!

Which other female leaders do you admire and why?
Condoleezza Rice because she is smart, passionate, eloquent, and from everything I have read about her, the master at multi-tasking. And talk about determined and disciplined. I remember reading how, while serving as Secretary of State under the Bush administration and negotiating international deals, she also worked out every morning at 4am and found time to keep up her classical piano! I also admire Brené Brown, Oprah, Sara Blakely and Roma Downey. There are so many incredible female leaders right now!

What do you want to accomplish in the next year?
I just finished writing my first book called "Faith in the Spotlight!" It was a two year process - long, but very fulfilling. My goal in the next year is to speak to as many young girls as possible and encourage them to dream bigger. I'd also like to run a half-marathon and take a nice long family vacation!