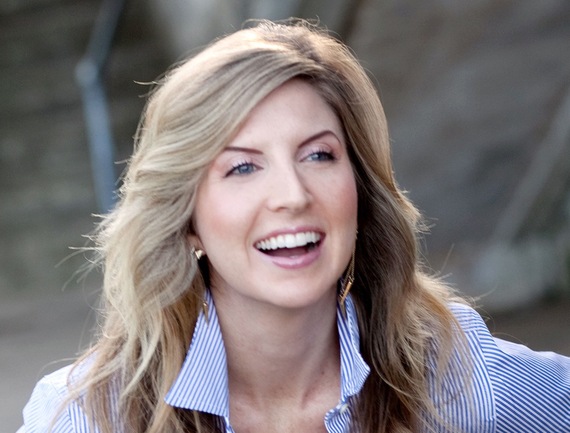 Rebekah Iliff is the Chief Strategy Officer for AirPR, a technology platform to increase PR performance. Previously, she was the CEO of talkTECH Communications, where she created an industry-first methodology for emerging technology companies which positioned talkTECH as one of the fastest growing, launch-only PR firms in the U.S. She is currently a columnist for Inc., and a contributing writer for Mashable, Entrepreneur, Huffington Post, PRWeek's "The Hub", and the Salesforce blog. Rebekah holds a B.A. in Philosophy from Loyola University Chicago, and an M.A. in Organizational Management and Applied Community Psychology from Antioch University at Los Angeles (AULA).

How has your life experience made you the leader you are today?
I have made so many mistakes that if I listed out each one it would consume the entire content of this interview, and then some! The upside? I choose to own the mistakes and failures rather than hide or blame. The questions I ask myself are: "How did that go so wrong, what was my part in it, and what do I need to do to avoid that in the future?"

This translates to leadership in the sense that in order to "lead" anything or anyone you really have to be extremely self-aware. You have to know how to "take stock" of your stuff, and your ego has to be left at the door. Ultimately, if you want people to respect you, and stick with you through the muck, they have to trust that you will keep your word, and that you'll show up when you say you're going to show up. You have to be perfectly aware of your own defects. In terms of being an impactful leader, humility is often the great equalizer.

How has your previous employment experience aided your tenure at AirPR?
I was a key player in building two early-stage companies, both service-focused, before I joined AirPR in 2012. The first, Rockit Ranch Productions, a Chicago-based entertainment development company, is still wildly successful today and now has just under 500 employees. When we started, we had five people. The second is a company I co-founded with a long-time colleague and friend (Kristen Tischhauser) called talkTECH: a "tech startup launch" focused PR company based in Los Angeles. To date, talkTECH has launched well over 100 companies into the U.S. market. It was on a much smaller scale than Rockit Ranch from a human capital standpoint, but the impact we've had terms of enabling early-stage startups to quickly gain traction and grow as a result of our counsel, communications planning, and strategy has been exponentially rewarding.

My role at AirPR nicely combines the variety the learnings I took from both of those experiences. At Rockit Ranch I was dealing with fast growth, managing the nuances of sourcing talent (as we hired people constantly), working with high profile brands and people, and handling all of our PR and Marketing. talkTECH put me at the center of the "new digitally-driven media world" and honed my skills as a PR practitioner and business owner who was continually faced with the question: How do you prove your value?

When I joined the AirPR founding team, I was brought on board to help build a product that would literally recalibrate the way the PR industry thought about PR measurement, and ultimately value. I had experienced the pain of regularly having to explain why PR deserved certain budgets and a seat at the table, so I knew how to think about the "value piece." And I had managed so many relationships from a customer/client facing standpoint (many of them high profile), as well as managed employees and people, that I was primed to understand the human capital component as well as the product side.

What have the highlights and challenges been during your tenure at AirPR?
The number one highlight has been the opportunity to be part of a team of extremely bright and talented individuals, all of whom have all made certain sacrifices because they believe in the company vision. I am inspired by them every day: the dedication, the focus, the commitment to the customers we serve. It forces me to be better, work smarter, and really think about problem solving in a new way. We have quite literally started and changed the conversation about PR technology (aka "PRTech") and measurement; and this is great for the entire industry.

The greatest challenge (yet opportunity for growth!) is managing all of the various aspects of my role and ensuring that I am prioritizing tasks and to-dos in a way that leads to direct impact on the business. I get pulled in many different directions, so maintaining balance and focus can get tricky if I'm not working "consciously." It's easy to start operating in "putting out fires" or "stressed" mode: neither of which is useful. Not a good look.

What advice can you offer to women who want a career in your industry?
I get asked this question quite a bit, because I think that being a female executive in the technology industry seems particularly nuanced. But, it's the same advice I'd give to any woman (or human for that matter) who wants any career in any industry of their choice: figure out what you like to do, figure out what you are actually good at doing, then figure out if there is a role that combines those two things.

Once you have answered that question, figure out how to be the best and commit to it fully. Show up every day with passion and gratitude and keep your word, but keep your ego in check. The other piece of advice would be to keep good people around you and avoid those who aren't serious about making an impact. There are jobs, and then there are careers. To have a career in anything you have to take it seriously, but not take yourself seriously. Know the difference.

What is the most important lesson you've learned in your career to date?
It's not a give and take, particularly when you are building a company. It's a give, and give, and give, and give, without expectation of anything for quite some time. To be a truly great leader, you have to fundamentally believe your role is to figure out how to create value for other people, not about how you're going to take from others to get what you want.

How do you maintain a work/life balance?
It took me a really long time to learn this, but I have to plan pretty much everything I want to do personally and put it in my calendar so that I don't let work obligations hijack everything...which it would do otherwise. Then I stick to the "plan" to the best of my ability: yoga on Monday and Thursday, meditation every morning of the week, guitar lesson on Wednesday, reading a great new book on Friday night, visiting my brothers in LA on the weekend, and the list goes on.

I sound like such a boring, Type-A freak as I write this, but I actually think it gives me tremendous freedom to be "present" and to really focus on the things I like, which allow me to also reflect and think about my work life in new ways. I don't want to show up to anything half-engaged, it's just not who I am. Also, I sleep a lot. Or I try to. I'm not one of those people who brags about the four hour a night sleep habit. I like a good solid 7 to 8 hours. That keeps me mentally balanced and not feeling or looking like the Bride of Frankenstein!

What do you think is the biggest issue for women in the workplace?
Hands down, understanding how to translate our value to a dollar amount and then just asking for what we need (and likely deserve) without an apology. The end.

How has mentorship made a difference in your professional and personal life?
As someone who has been mentored since the age of 18 by a handful of intelligent and thoughtful humans, I believe it's the most necessary component of finding and maintaining a fulfilling career, not to mention life. Particularly as entrepreneurs, it's easy to assume a "lone wolf" position and to dismiss opportunities to seek out mentorship, because so much of what the entrepreneur does requires the ability to make tough decisions alone without input or "permission" from others; but I think there is danger in not finding a "dream team" of people you love and trust who can act as sounding boards and advisors during difficult times or crossroads.

As far as being a mentor, it's likely the single most rewarding thing about my career. Not to mention that it's hugely flattering that anyone would care what I have to say. In all honesty, it also keeps me accountable to goals and intentions I've set for myself; because if others are expecting me to live and act a certain way...well, I better get to it.

Which other female leaders do you admire and why?
I really admire fashion designer Rebecca Minkoff. I've gotten to know her and value her thinking around everything from building a successful business to being a voice for getting more girls interested in STEM. She really is the "whole package" in an industry where there tends to be a ton of silliness. She rises above it all and manages to be relevant to Millennials - that may be the toughest thing to do outside building a multi-million dollar business! They can be a tough crowd.

Maria Klawe is another one of my "leader crushes" as of late. As the President of Harvey Mudd College (not to mention recently making it to Fortune's "Top 50 Leaders in the World" list ahead of Angelina Jolie) she has fundamentally changed the conversation around females and computer science. Under her leadership, Harvey Mudd has become one of the most "diverse and inclusive" campuses in the U.S., with STEM as a core focus. I had the chance to facilitate a fireside chat with her at GoDaddy's Silicon Valley office a few months ago with 20 of the industry's leading females in technology looking on. I think we may have actually solved some serious, systemic problems with the technology industry in a span of two hours with her at the helm. Now that's efficient leadership!

What do you want AirPR to accomplish in the next year?
We are going to continue to rapidly grow and gain industry adoption as the definitive technology solution for advanced PR Measurement. No more black boxes. I think we are extremely well positioned to eliminate old and archaic practices that don't serve anyone: consumers, journalists, PR practitioners, and content developers alike. But most importantly, I would like us to be seen by our customers as the most attuned technology solution they use on a daily basis. I want them to feel like we add value on every level and in every aspect of what we provide.