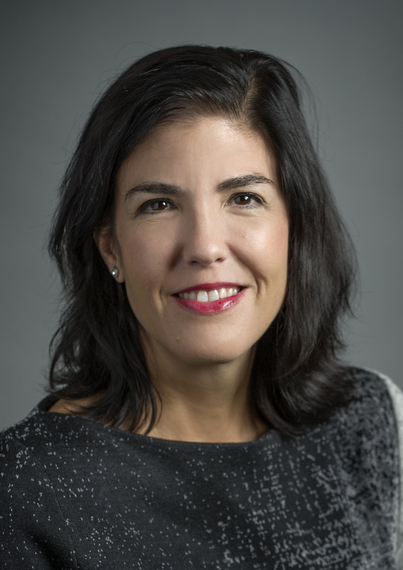 Tina Fordham is Managing Director and Chief Global Political Analyst at Citi. With Citi since 2003, Tina advises institutional investors and corporations, typically at the C-suite level, about the implications of macro global political developments. She has been named in the "Top 100 Most Influential Women in Finance", the "Top 19 Economists on Wall Street" and is a member of the World Economic Forum's Strategic Foresight group.

How has your life experience made you the leader you are today?
To talk about a career path in my case is laughable. I've gone from the Silicon Valley to Prague, Moscow, New York, Baku and London; less of a path than an Odyssey. The role I have carved out as the first and only Chief Political Analyst working for a major Wall Street institution is a collision between a hard-working Portuguese immigrant upbringing, the collapse of communism, the globalization of financial markets, and what the British call sheer bloody-mindedness. I'm living proof that you don't have to have an MBA or be born with a silver spoon in your mouth to make it to senior levels in Banking. Of course with a background like that, it helps to be self-motivated and never take no for an answer.

Perhaps unsurprisingly, my route into banking was pretty unconventional; after graduating from university in San Francisco, I spent much of the 1990's in Eastern Europe teaching and conducting field research. My first-ever business trip was to the Komi Republic, in the Russian Arctic in 1996 for the charity Action for Russia's Children. It was a technical assistance project for a US company that wanted to support an orphanage for disabled children in a Soviet-era industrial town they were helping redevelop. Contrary to what I'd expected, it was not depressing but hugely inspiring. Other projects included field work on democratic transitions in Russia and Azerbaijan, and with factory workers in Hungary and Poland.

Working closely with both early foreign investors into Central and Eastern Europe and local people who were dislocated by the post-Communist transitions was life-changing. It taught me a lot about understanding the impact of political, economic and social change from the bottom up and what investors need to understand about fast-changing environments. These insights inform my research to this day; there is no substitute for first-hand experience. Working in challenging and complex environments also makes you resourceful. You learn that if what you need doesn't exist, invent it. I thought Citi needed a Chief Political Analyst, and eventually, they agreed.

How has your previous employment experience aided your tenure at Citi?
After returning from Eastern Europe and completing a Master's degree at the School for International and Public Affairs at Columbia (one of the best decisions I ever made), I joined what was then a small start-up political risk consultancy in New York called Eurasia Group. What initially started out as a research project looking at post-Soviet political transitions ended up as the first political and economic risk index on Wall Street, a joint venture with Lehman Brothers launched in 2001 during the emerging markets boom. I was the head of the joint venture, and as part of that business, developed the first political analysis research products specifically tailored to financial market investors. Bringing political science-based analysis to investors as we did then and I still do now has been likened to the first physicists who came to Wall Street. We were pioneers.

What have the highlights and challenges been during your tenure at Citi?
Establishing Political Analysis as a mainstream research offering for investors has been both the challenge and the highlight of my 13 years at Citi. Citi is the only major financial institution that offers political analysis as a dedicated product area, alongside traditional asset classes like economics, commodities and equity research. It simply didn't exist before. My approach is data-driven, but incorporates qualitative methods too, supported by political science theory and historical comparisons. The demand for what I call political analysis strategic advisory services from both investors and numerous FTSE 100 companies at the board level has been snowballing, and marks a new iteration in my approach. I am deeply committed to the notion that investors and companies can make political analysis a more systematic part of their approach to thinking about opportunities and risks, and constantly thinking of new ways to approach this, such as incorporating qualitative indicators and survey- and scenario-based approaches.

Recent career highlights include spearheading Citi's first research reports on global public opinion, which I coined as "Vox Populi Risk" in a ground-breaking empirical study 'What the New Vox Populi Risk Means for Politics, the Economy and Markets' and gender economics Women in the Economy: Global Growth Generators' in May. We now plan to incorporate gender research as an ongoing topic, and our conceptualization of shifting and more volatile public opinion as outlined in Vox Populi continues to resonate.

On both counts, I'm immensely proud to have had the opportunity to help produce innovative analysis that is helping take banking research into new territory, and am gratified that these efforts have been supported internally and well-received by clients.

What advice can you offer to women who are seeking a career in banking?
I would offer the same advice to a woman in banking as I would to someone looking to succeed in any occupation: identify opportunities to contribute, don't wait to be asked. Then make sure the quality of your work is outstanding; excellence beats expedience.

One point that I feel strongly about is this: when you are an outlier, for whatever reason, you have two choices. Either you twist yourself into a pretzel to try to fit in, or embrace being different and turn it into a source of strength. Embracing being an outlier is clearly the more compelling option: it is also the most rewarding. And people are more likely to remember you.

On a more prosaic level, never wear black on TV or presenting. You might as well put on an invisible cloak if you do that.

How do you maintain a work/life balance?
This has to be my least favourite question, although everyone asks. As a single mother of two spirited school-age daughters (age 7 and 10) with a high-profile global role, an outside observer might be tempted to say that my work-life balance leaves something to be desired. It is certainly true that I live and breathe what I do; after all, the global political and investment environment is in constant flux. But I think that if you love what you do, it makes everything else bearable. My life isn't perfect or perfectly balanced, but I have had some amazing opportunities thanks to my career, and I wouldn't trade them for anything.

My daughters and my friends are unreservedly supportive, which is a huge source of strength. I also don't suffer too much from the guilt that plagues many professional women. In the world that I grew up in, people worked in factories and shops, and took overtime and second and third jobs to support their families. You had to work, and do the best you could while you were there. There was no shame in it.

That's not to say that I don't feel the stress of it all at times. To clear my mind, I run in the parks of Northwest London. When I want to be creative, I bake cakes and bread. Somehow it just about works.

What do you think is the biggest issue for women in the workplace?
Implicit in this question is the assumption that women need to change in order to fit into a male-dominated workplace. I don't think women need to be more like men; we need to have the courage of our convictions. Fearlessness is my most admired quality, for men and women alike. Humility is a close second. Combining both is not a bad way of moving around in the world.

How has mentorship made a difference in your professional and personal life?
In my own career, I have benefitted greatly from senior sponsors, male and female, and also had great support from peers and informal mentors. I've also been privileged to mentor others; I am currently mentoring a veteran of the wars in Afghanistan and Iraq, and I can assure you that mentoring a former tank commander means the exchange goes two ways. Diversity isn't just about promoting women, it's about incorporating a wider range of experiences and viewpoints, too.

Which other female leaders do you admire and why?
Although the number of women in leadership positions is small, as individuals they are mighty, to paraphrase the line from a Midsummer Night's Dream. Christine Lagarde, head of the IMF, whom I met at Davos this year, is one of the female leaders I most admire. Her intelligence, determination and grace at the helm of a major international institution in the midst of a fragile global economic recovery make her a fantastic role model.

Former Secretary of State Madeleine Albright was an early source of inspiration and remains so. Besides being a formidable scholar of the USSR as well as the first female US Secretary of State (and fellow SIPA alum), she also has a great sense of humour. I met her last year and she had us in stitches with her tales about world leaders, like the former North Korean leader. She also has some great one-liners. My personal favourite is "There is a special place in hell for women who don't help other women,".

What do you want Citi to accomplish in the next year?
As Citi continues to be successful as an institution, more opportunities for women in leadership positions will follow. A strengthening trajectory for the industry and for the global economy offers the best hope for furthering the goal of increasing diversity, not only for women but more generally. Diversity of thought leads to better management, better idea-generation, and outcomes for clients.