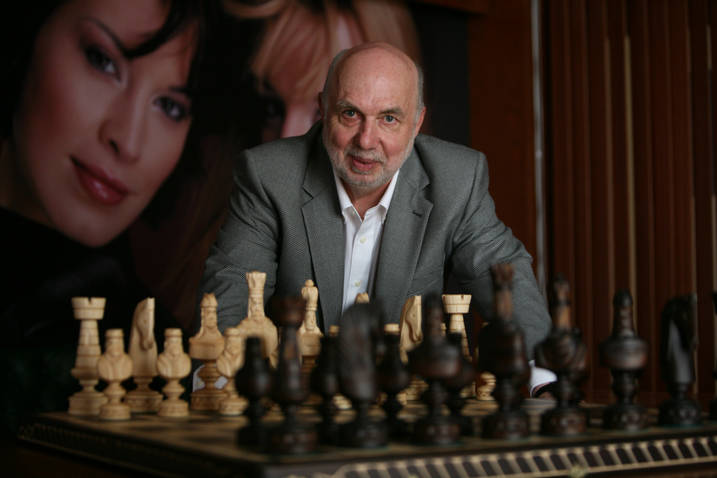 Lurking in the background, hiding their identity, they seem mysterious, magical, beautiful. At first, they observed the game from a distance, but as centuries went by, women were drawn closer to the chessboard. Still, for ages they could not play chess in public and it took some courage and determination to break into the male-dominated game. Let's have a look at some who paved the way. 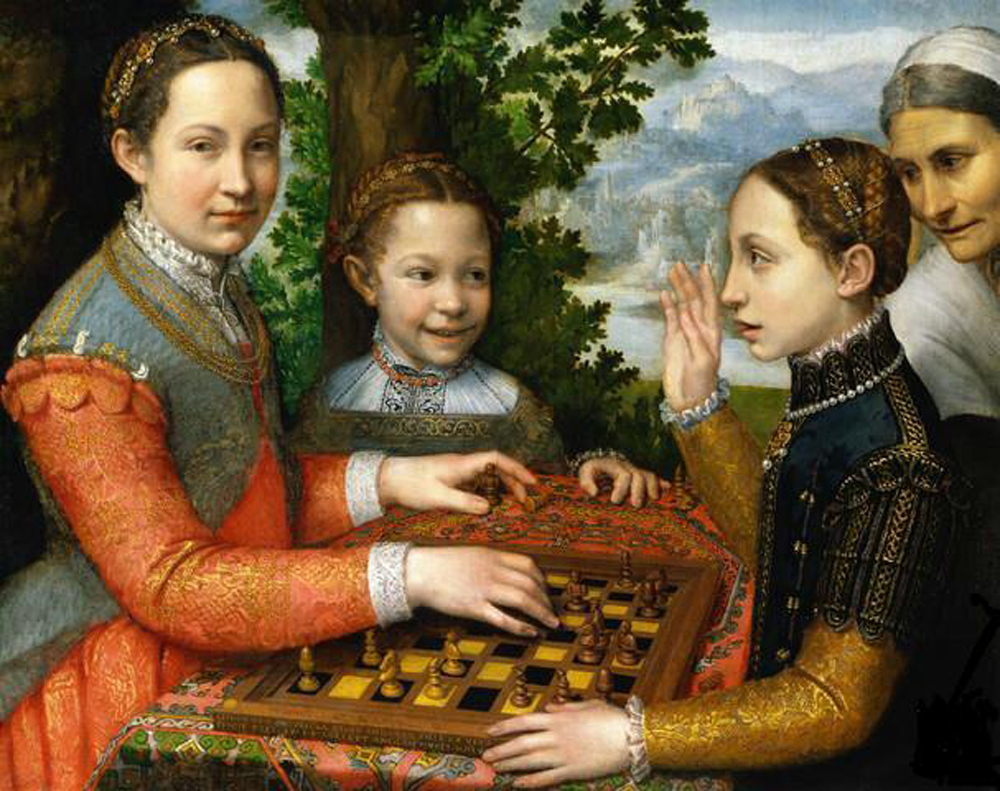 We can observe that the chessboard is set up wrong, with the dark square in the right corner - a common occurrence in today's TV commercials. The youngest Anguissola sister is looking at the misfortune of the one to her left, perhaps already aware that one day she would beat them all. But for the time being, the oldest is the best and she looks to the audience as if waiting for applause. They could be the 16th century answer to the Polgar sisters. 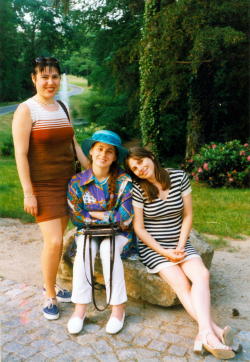 from the left: Zsuzsa, Judit and Sophia

Some artists can't resist the temptation to show nude women at the chessboard. We have seen paintings of Madame de Remusat playing chess with Napoleon Bonaparte at the Malmaison castle in 1804. On one canvas she is fully dressed; she plays in the nude on another.

In early 1980s I visited Paul and Mary Belin at their monumental estate Evermay, the largest private property in Georgetown, Washington, D.C. Once inside, Paul showed me a painting of two naked women smoking and playing chess. He acquired it in Paris. "It was banned from public display," he said. "Do you know why?" Nudity would be too obvious, so I chose chess. "No," said Paul triumphantly." Because they smoked cigarettes!"

Nudity was displayed in Julien Wasser's photo of Marcel Duchamp playing chess with the naked Eve Babitz at the Pasadena Art Museum on October 18, 1963. "I was a naked pawn for art," Babitz confessed in Esquire in 1991. Jennifer Shahade, a former U.S. women's champion and author of Chess Bitch: women in the ultimate intellectual sport, retaliated in 2009. She came to pose at the chessboard fully dressed, but her male opponent was stripped bare.

In the 19th century women began to make inroads into chess. Since they were not allowed to play in chess clubs with the male members, they tried to play against each other. Contrary to popular belief, the all-women chess clubs didn't form in New York in 1894 nor in London in 1895, but in Holland in 1847. According to former world champion Max Euwe, the attempt of the brave Dutch ladies lasted only a year.

Some women were able to follow chess because the game was played in their families. One of them, Edith Winter-Wood, composed some 2000 different chess problems during her lifetime, but was hiding under the name Ms. or Mrs. J. W. Baird. Her works were elegant and precise.

She earned first prize for a three-mover published in Hackney Mercury in 1893. 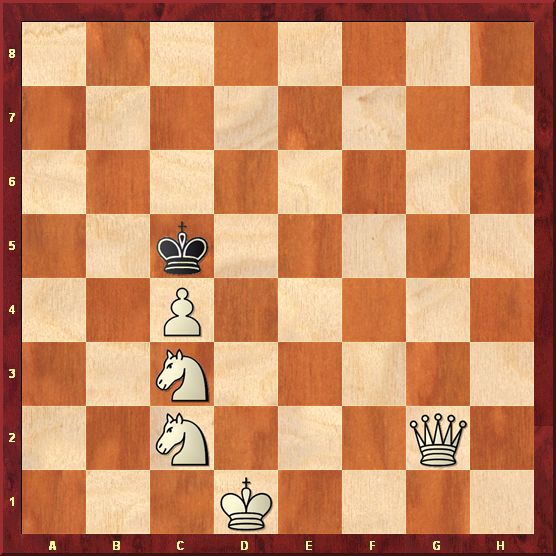 Another composer was Mathilda Fagan (1850-1931) from Italy. In 1875, her chess problems appeared in the City of London Chess Magazine. She was also a good over-the-board player. But when Fagan won the tournament in the male-dominated Bombay Sports Club in 1882, she was almost disqualified because she was a women.

Even in 1970 the men were still reluctant to play against women. During the tournament in Wijk aan Zee, one of the best Georgian women, Nana Alexandria, and I were supposed to play two separate simultaneous exhibitions. I proposed to Nana to play together an alternate exhibition - one round she, the next round me. The idea went nowhere. "I am not going to play against that woman," said one man and several others nodded in agreement.

It was much better in 1997 when Zsuzsa Polgar and I played an alternative simultaneous exhibition in Washington, D.C. It took place on the eve of the vote in the U.S. Congress to admit Poland, Hungary and the Czech Republic to NATO. Our opponents were all men, some of them Congress members or their assistants, but nobody complained about playing Zsuzsa.

Vera Menchik (1906-1944) was the first women's world champion who could play successfully against the best male players. She almost stirred an international conflict. Three countries claimed her: she was born in Moscow, played chess mostly for Czechoslovakia, married an Englishman and died in London.

Menchik won the first official women's world championship in London in 1927 and defended the title six times in tournaments with an incredible overall score of 78 wins, four draws and one loss. She also defeated the German Sonja Graf in two world title matches in 1934 and 1937. Menchik played positionally most of the time, but she could deliver a nice tactical blow. 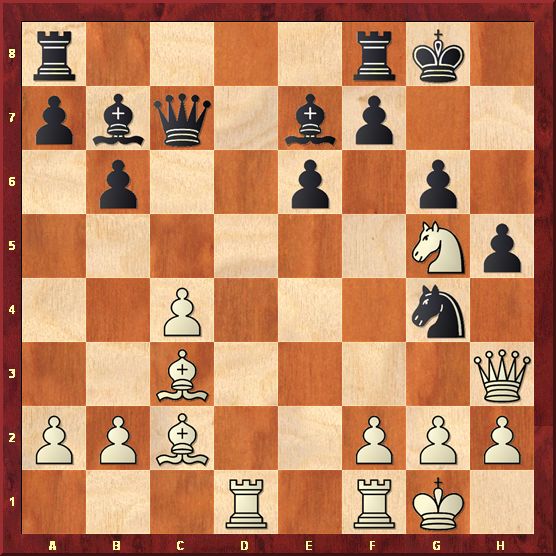 The Czechs honored Menchik with a postage stamp designed by Zdenek Netopil. He could not make up his mind, but eventually let her smile. It was issued February 14, 1996. Menchik held her world title for 17 years, the longest of any woman. Last year, she was inducted into the Chess World Hall of Fame - the first woman among chess giants.

During the 1929 Karlsbad tournament, the Austrian master Albert Becker founded the Vera Menchik Club. He suggested that anyone who loses to the lady should become a member. He was the first victim, but there were others. Among her most famous casualties were dr. Max Euwe and Sammy Reshevsky. Out of 437 tournament games against male opponents, she won 147.

In 1921 Menchik's family moved from Moscow to England. Vera was 15. When she saw bottles of milk left outside of English homes, Menchik said: "In Russia, they would immediately be stolen." The quote didn't make it to Elizaveta Bykova's biography of Menchik. Bykova had a different idea of what should be taken.

It was not an ordinary pawn, but a pawn touched by three world champions. Mikhail Botvinnik's last move of the 1948 world championship was 15.b4. The b-pawn brought the Soviets the first world title and had to be immortalized on film, but Botvinnik was nowhere in sight. The film crew covering the historical moment spotted a boy who demonstrated the game on a big wallboard. His jacket matched Botvinnik's and they asked him to make the move with the b-pawn.

The Soviets had no problem doctoring photographs. Whoever fell out of Stalin's favor disappeared from historical pictures. Now they added a fake hand. It belonged to Jakov Estrin who became the 7th correspondence world champion in 1976.

A few moments later during the celebratory chaos, another hand appeared and removed the b-pawn from the board. Five years later the thief became the women's world champion. The stolen pawn brought her luck. Her name was Elisaveta Bykova and she was the strongest of the three Soviet women who held the world title after Menchik's death.

It all changed with the appearance of two Georgian women who dominated the women's title for nearly 30 years: Nona Gaprindashvili (1962-1978) and Maya Chiburdanidze (1978-1991). They didn't mind competing against men. The more aggressively they played, the more successful they became. The pace of their games quickened, sacrifices multiplied and it was fun to watch them. Women's chess would never be the same.

In the year Garry Kasparov was born, the 22-year-old Gaprindashvili played a nice combination in the 1963 Championship of Georgia, destroying her opponent through the vital square f7. 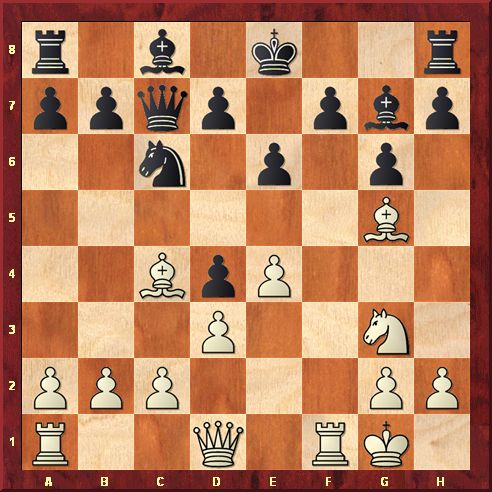 The Chinese dynasty began with Xie Jun (1991-1996 and 1999-2001). She learned tactics from the traditional Chinese chess - xiangqi - and brought her experience to the chessboard. Already at 15, she was the girl with Adolf Anderssen's combinational talent. In the game against her coach Qi the pieces collided with speed. It was brutal, imaginative, colorful. Another assault against the square f7. 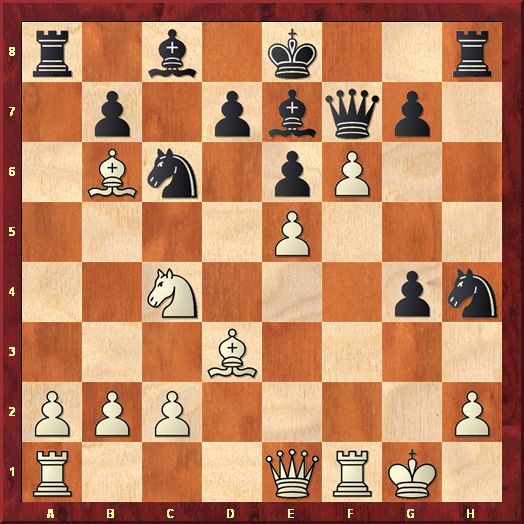 And that brings us to the Polgar sisters. When they were very young, they had to choose: mathematics or chess. They made the right choice. Competing mostly against men, they progressed rapidly and won many titles. Zsuzsa became the women's world champion.

Without a doubt, Judit is the all-time best woman chessplayer. During her career she defeated many strong male players and world champions such as Kasparov, Anatoly Karpov and Vishy Anand. In 2005, she was rated number eight in the world with her FIDE peak rating of 2735.

In January, Judit Polgar and Hou Yifan met in Gibraltar. Just another game, said some. A historical contest between the Queen and the Princess, thought others. Hou won. She is climbing all alone. Can she reach Judit's heights so far unattainable to other women?

Champions come and go and we wish them well. But before they say the final goodbye, we demand another masterpiece. At the 2004 olympiad in Calvia, Spain, Zsuzsa Polgar and Maya Chiburdanidze obliged. Their tactical skills did not diminish with age and they gave us a memorable performance. And again, the square f7 played a major role in Zsuzsa's combination.

(The weakening of the long diagonal allows a beautiful combination. The queen on c3, supported by the bishop on b2, can now "see" as far as the square h8. Developing the knight 13...Nc6 gives black a good game.) 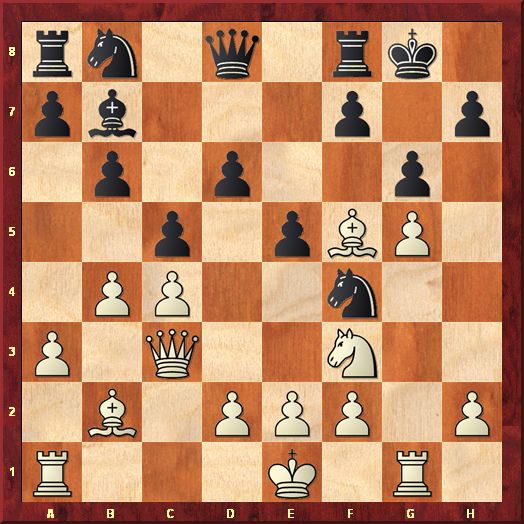 The top photo by Peter Mayer from Hospodarske noviny is from my recent trip to Slovak town of Nitra where we celebrated the 50th anniversary of my blindfold simultaneous exhibition against 10 club players. The photo is from Roman Cerulik's headquarters of the K-CERO company where the celebration took place.