In Ancient Egypt, beer was made almost entirely by women. In Baltic and Slavic mythology, it was a woman -- the goddess Raugutiene -- who provided heavenly protection over beer. In colonial America, women sustained their families by home brewing "small beer," which they supplemented with cider. That all began to change in the 19th century, when beer brewing left the private domain and became a commercial, large-scale enterprise -- one run almost entirely by men.

Now, the tide is turning once again. As the "good food" movement continues to gather steam, craft beer brewing is returning to its DIY roots. And while it remains a predominantly male industry, women have been part of the craft beer renaissance since its first stirrings in the early 1980s. Our next Rulebreaker, Teri Fahrendorf, has long been at the forefront of women becoming mainstays on the brewery floor. 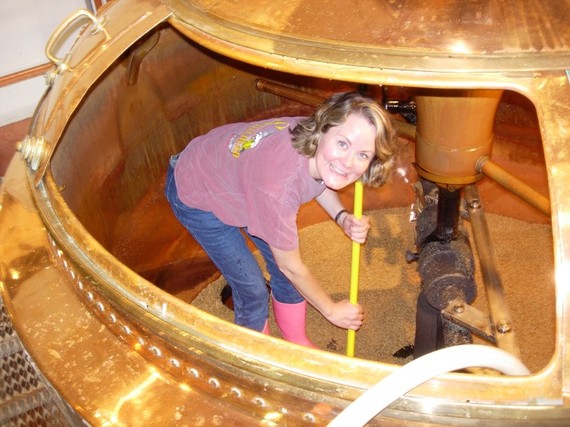 Teri's first career as a computer programmer was quickly subsumed by a love of creating craft beers. The first woman craft beer brewer to attend the Siebel Institute's Master Brewer Program in Chicago, she became the third woman craft beer brewmaster in the country at Steelhead Brewing in Eugene, Oregon -- and the first hired directly, rather than part of an ownership team. After 19 years at Steelhead, her cross-country travels and brewery visits inspired her to create The Pink Boots Society (named for her signature footwear), an organization that empowers women in the beer industry to advance their careers through education. Pink Boots currently serves over 2,500 members in about 30 countries, and gives away 12 scholarships per year in the United States.

I sat down with Teri to discuss her journey from curious home brewer to influential mainstay on the craft beer brewing circuit.

Ilaina Edison: How did you cultivate an interest in beer, and how did that evolve into a life's work?

Teri Fahrendorf: I grew up in a German family, so there was always a familiarity and comfort level with beer. Still, by the time I was in college - the minimum drinking age was still 18 at this point - consumers, myself included, only really knew the yellow fizzy stuff.

I took a speech class in college, in which everyone had to give a how-to presentation, and someone did his on wine. I was fascinated, and on the way home went to the store to get a balloon and some Welch's grape juice concentrate. ["Balloon wine", a popular means of making wine at home in the 1980s, requires a glass jug, large latex balloon, yeast, sugar and juice.] I got really into it. It wasn't until after I graduated from college and moved to San Francisco that I switched over to beer. At the same time, I realized I didn't much care for my chosen career, computer programming. I hated sitting in a cubicle all day. So I saved up to do a big vacation and decided to explore this home brewing hobby by attending the annual Great American Beer Festival conference in Denver.

At this conference, I met people who had attended brewing school - I didn't even know there was such a thing! The Siebel Institute in Chicago was the one everyone knew about. At the time, the big beer companies would send staff members there to advance to the next level of management, but there was only a handful of home, craft beer brewers - I was maybe the fourth or fifth. And I was the first woman craft brewer. Now there are thousands. 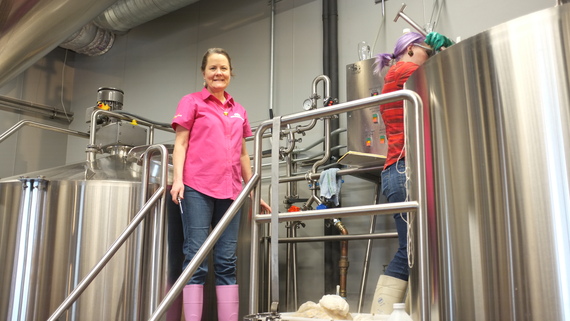 IE: What was the landscape of the industry like at the time, when you first got into craft beer brewing formally?

TF: When I entered Siebel, most of the people in my course were from Coors. Everyone asked me what brand I brewed, and I said I didn't brew brands, that I brewed styles. They had no idea what that meant. All anyone knew or made was yellow fizzy beer. I realized I had to educate these people. I called every microbrewery - what "craft" breweries were called at the time - in town and arranged field trips.

When I transitioned to brewing professionally, people had never seen a woman brewer before. At one informational interview, a guy asked, "Do you think girls can make good beer?" There was also a tradition that when you opened a new brewery, you would invite all of the local brewers to come over and taste your beer. I did that, thinking of myself as already being a peer - not realizing they were really there to see whether or not I could make good beer. It was so odd, every one to a man came up afterwards and shook my hand and said: "You're very good." I realized I was being initiated into an old brewer network that I didn't even know existed.

IE: You've said in other interviews that you've never felt alone as a woman in a male-dominated industry. Did you ever encounter any difficulties?

TF: I did have difficulties, but I didn't dwell on them. When I first got out of Siebel and was looking for a job, some men didn't even want to interview me, so they would ask questions that would preclude having to interview me. They would say, for example: "Can you carry a full keg of beer" - 150 pounds, not counting the keg itself - "up a flight of stairs?" I said that nobody should be doing that, because it is a very high injury hazard. Another asked, "Can you lift this 55-pound sack over your head and dump it into the mill hopper?" I said no, but that I would get cinder blocks and build a set of steps to get up easily.

They asked the question wrong. What you should ask is: "I need to accomplish X - how would you do it?" Women solve problems differently than men, and their physical characteristics - like (in some cases) smaller hands that can make adjustments to equipment in tight spaces - are often an asset. There are spaces men just can't get into, and we tend to finesse our way through obstacles, rather than pushing through with brute force. 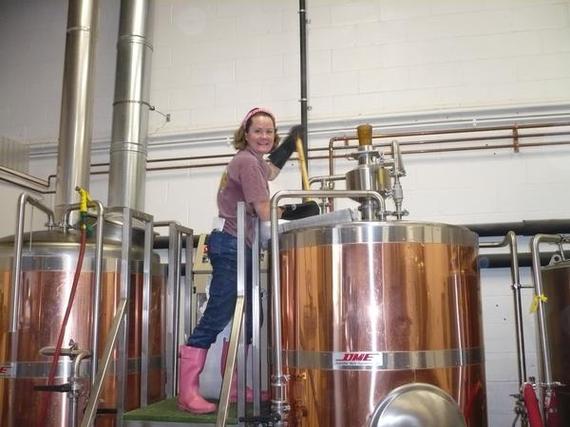 IE: How have those experiences shaped your work with the Pink Boots Society, as far as selecting scholarship recipients?

TF: I always tell ladies that there is no gender-based ceiling - there is only an education-based ceiling. For that reason, we support opportunities to get women brewers to that next stage of their career via educational opportunities. Our first scholarship recipient, for example, had already been brewing for years - she had a great deal of talent and experience. But she just couldn't crack becoming a brewmaster, because she had no formal training. She knew that if she could get her hands on that training - in this case a concise course in brewing technology - she could make that break.

IE: What advice would you give women who are trying to break into the industry, or to those perhaps struggling against sexism or bias?

TF: I tell them that you are a real asset with what you have going on - your unique background, your skills. If those chowder heads don't want to hire you, go get a job somewhere else because you don't want to work for them anyway.