The movement to build a National Women's History Museum in Washington, DC continues to gain momentum. While all museums should meet the challenge of gender inclusivity, construction of a National Museum of Women's History is necessary to correct the long-standing gender imbalance in our national narrative. Women in the colonial and Revolutionary eras are especially overlooked. A National Women's History Museum will one day be built, and I hope will bring forward many of the histories of early American women who contributed to the development of our nation. My new book, Women in Early America , features 11 new essays by leading historians, all of which testify to the remarkable lives that we are still only just beginning to uncover. 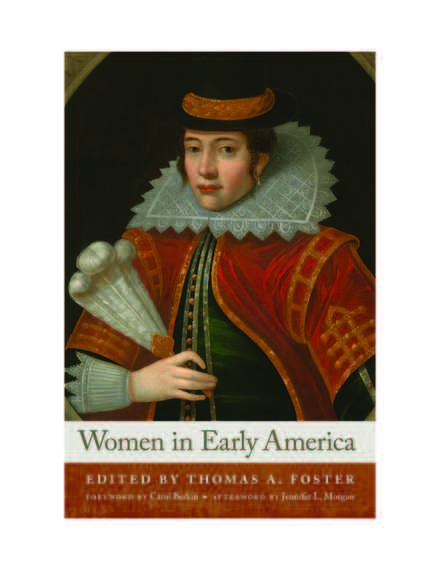 What follows are stories of two of these women, drawn from the introductions to two of the essays in the volume ("Doña Teresa de Aguilera y Roche before the Inquisition: The Travails of a Seventeenth-Century Aristocratic Women in New Mexico," by Ramón A. Gutiérrez, and "'I Knew That if I Went Back to Virginia, I Should Never Get My Liberty': Ona Judge Staines, the President's Runaway Slave," by Erica Armstrong Dunbar). Although very different -- one an elite, seventeenth-century Spanish woman, the other an enslaved eighteenth-century African American woman -- together, they help make up the rich and diverse fabric of our nation's history.

April 11, 1663. Doña Teresa de Aguilera y Roche, the wife of New Mexico's governor, Don Bernardo López de Mendizábal, found herself in a dank and dingy cell, a prisoner in the secret jail of the Holy Office of the Inquisition, close to Mexico City's center. There she sat, hour after hour, day after day, until all the seasons had come and gone and nearly two years had passed. On December 19, 1664, her case was suspended for insufficient evidence. But for 21 months she had been stripped of her possessions, of all trappings of her aristocratic rank, cut off from communication with family and friends, and sustained on meager rations.

How Doña Teresa, wife of the governor of the Kingdom of New Mexico from 1658 to 1661, became entangled in the web of the Holy Office of the Inquisition is the complicated story here. The events are known through two very large procesos, or Inquisition court dockets, still extant in Mexico's National Archive. The case against Doña Teresa consisted of forty-one counts of heresy, Judaism (judaizante), and sorcery, which all stemmed from her years in Santa Fe as the governor's wife.

In the early seventeenth century, the Inquisition brought charges against a number of visionary mystic women, known as iluminadas and beatas in Spain and the Americas, mostly for usurping the clergy's jealously protected monopoly on the expression and interpretation of religious experience. There were cases too against indigenous and African slave women for practicing sorcery and love magic. But rarely were these women literate, and even more singular were the women who had the wherewithal to mount spirited defenses against their accusers before the Inquisition. Doña Teresa was such a woman. She was literate and learned, speaking Italian, French and Spanish and reading broadly, even in Latin. She was pugnacious and testy, of course, made all the more so in her written declarations by her imprisonment, determined not to let the words of her accusers stand. No other woman in colonial New Mexico left such a record.

Born sometime around 1774, Ona Judge was raised as a slave on George and Martha Washington's Mount Vernon estate. As a slave and then a fugitive, Judge lived in rural Virginia toward the end of the colonial period and then traveled to the busy cities of New York and Philadelphia during the infant years of the new nation. Judge's bold and risky decision to flee her masters eventually landed her in a quiet hamlet near Portsmouth, New Hampshire, where she remained until her death in 1848. Although the most revered family in America owned her, George and Martha Washington were never able to recapture Ona Judge. This essay focuses on the escape of one of the most understudied fugitive slaves in America and simultaneously serves as a startling example of just how complicated slavery and freedom became in the late eighteenth and early nineteenth centuries.

Presenting Judge's story is no easy task, for it requires the historian to be part detective, part archivist and part psychologist. Judge, who remained illiterate, offered her life story through two oral interviews given to abolitionist newspapers toward the end of her life. Historians are fortunate to have these sources, as most enslaved and fugitive women have been written out of the master narrative of American history. Judge's story gained some national recognition during the apex of the abolitionist movement. Her first interview appeared in a New Hampshire newspaper the same year Frederick Douglass published his autobiography. Although Judge did not gain similar recognition as Douglass, her story lends texture to a fugitive experience that is too often described from the viewpoint of the male runaway. Young slave women did indeed run away, and some were successful.

The first president also contributed to the telling of this story. George Washington and his secretaries were scrupulous note takers, and many details about Ona Judge, her life at Mount Vernon, in New York and in Philadelphia, are revealed to us through their quill pens. Washington never conceded his quest to capture Ona Judge. Only his death in 1799 ended the concerted efforts to reclaim her. Following Martha Washington's death in 1802, Judge was never again pursued by bounty hunters hired by the Washington/Custis heirs. The young fugitive found a husband and had three children (all of whom were fugitives) and tackled new challenges for a northern fugitive slave. Judge's newest and lengthiest challenge was survival.