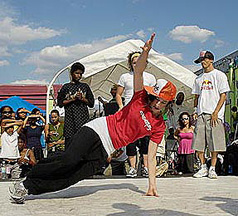 In the context of popular culture the history of Hip-Hop has been recited and mythologized many times over. Born in the 1970's South Bronx, from a foundation of Jamaican DJ techniques and verbal delivery, African-American soul music, Brazilian capoeira inspired breakdance moves, and technicolor aerosol paint, grew the international phenomena known as Hip-Hop. The one element of Hip-Hop that has never been fully acknowledged is the role of women in the spotlight and behind the scenes.

In 1979 Sugar Hill Records became the first record label to produce and distribute a rap record. The company's first single, Rapper's Delight became a national sensation and is considered to be a hip-hop classic. The co-founder of Sugar Hill Records was Sylvia Robinson. In 1981 Tommy Boy Records, released Planet Rock by Afrika Bambaataa and the Soul Sonic Force. Tommy Boy Records was also co-founded by a woman, Monica Lynch. 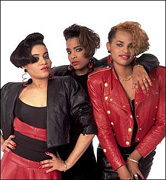 Once again women were at the forefront when the female trio, The Sequence (featuring a young Angie Stone) released the hit Funk You Right On Up. The 1979 single is considered to be the first female rap record. Soon afterwards female MC's such as Salt -n- Pepa, MC Lyte and many others became forces to be reckoned with. For rhythmic backup women employed female dj's such as Spinderella and Jazzy Joyce for beats and rhymes. When the male MC's hit you with machismo, the women counterpunched with sass and class.

On the graffiti wall of fame you can most certainly see the name Lady Pink. Lady Pink is considered to be a female graffiti artist and muralist with artistic skills as strong as, if not better than her male peers. She painted nyc subway trains from 1979-1985 and now her work is collected by major art museums including the Metropolitan Museum of Art. Lady Pink also had starring roles in Wild Style and Bomb It, classic films about Hip-Hop culture. 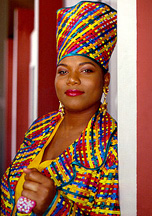 In everyday life women are natural multi-taskers, and in hip-hop the fact remains the same.
Female artists that developed their artistic and entrepreneurial skills have taken the art form to another level. In the early '90's Dee Barnes, a former MC and radio host became the first woman to host a syndicated hip-hop television show, Pump It Up! Queen Latifah quickly followed in her footsteps with a very successful recording career, the TV sitcom Living Single, a talk show, major cosmetic campaigns and an Oscar nomination for Best Supporting Actress. Eve, has also done well for herself . Her empire has encompassed records, a sitcom, and a clothing line.

Wendy Williams (the original DJ Spinderella for Salt-n-Pepa) was a wildly popular radio host, and now has one of the most highly rated talk shows on television. DJ Beverly Bond is using hip-hop as an educational tool to reach the youth. She is the founder of Black Girls Rock Inc! Black Girls Rock! is a mentoring program focused on helping young black women interested in careers in music obtain the skills and guidance necessary to be successful in the business.

For every woman in the spotlight there are hundreds more behind the scenes. Women are the people primarily working as artist's publicists, sylists and choreographers in the hip-hop world. If you liked the designs worn by Missy Elliot and Busta Rhymes, you can thank stylist June Ambrose. If you are familiar with the many hip-hop album covers shot in the last ten years, you were probably looking at the work of photographer Sarah A. Friedman. When it comes to choreographers who got their start in hip-hop, think of In Living Color's Fly Girls alumni Rosie Perez, Jennifer Lopez, and Laurie Ann Gibson. All of whom have choreographed too many television shows, videos, movies, and concerts to mention.

Today the future is brewing in Minnesota and there are many women's names about to be known. Intermedia Arts, located in Minneapolis, has unleashed the mother of all hip-hop festivals; B-girl Be. The B-girl Be festival is the only arts festival in the world solely dedicated to the contributions of women in hip-hop. The mission of B-Girl Be is to influence and inspire leadership to change the perceptions and roles of women in hip-hop for current and future generations. The fourth annul event is curated by Michele Spaise and Theresa Sweetland.

This year's festival features Mama Said Knock U Out! an international visual art exhibition showcasing 28 female artists from around the world who use their art to empower, inform and organize. These women are employing hip-hop culture as a means of expression, connection, education and global social activism. Mama Said Knock U Out! will include work in video, photography, painting, sculpture, film, and textiles. I am this year's featured artist. I was commissioned to produce my first sculpture and sound installation, in the main gallery. Past participants have included Lady Pink, Martha Cooper, Faith47 and Roxanne Shante. 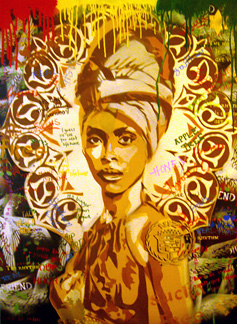 On Saturday, September 19th, Intermedia Arts takes it back to the streets with the B-Girl Be Block Party, an all-day festival that brings together women from Minneapolis and all over the world to celebrate hip-hop's girl power. The B-girl Be Block Party will showcase dance, live mural painting, film, a spoken world slam and an art marketplace.

This year the B-girl Be organizers will have the power to literally choose the belle of the ball.
The McNally Smith College of Music has donated a $10,000 scholarship to a B-girl participant for the McNally Smith's Diploma program in Hip-Hop Studies. The program is for prospective students who want to explore and develop in a cross-departmental curriculum that covers music, recording technology, language, music history, and music business.

When it comes to women in hip-hop, don't call it a comeback. Women have been here for years.

Purchase tickets online for the B-girl Be Block Party. The Mama Said Knock U Out! exhibition will be on view until October 23.

Lauri Lyons is a photographer, artist and author. Her books include Flag: An American Story and Flag International.