This post is based on excerpts from the recently released book The Measure of a Nation: How to Regain America's Competitive Edge and Boost Our Global Standing:

Women hold elective office at every level of American government and have risen to positions of considerable power in both elected posts -- for example, Speaker of the House of Representative Nancy Pelosi -- and in critical appointed posts. Perhaps the most notable example of the latter is that the 64th, 65th and 66th U.S. Secretaries of State have all been women (Madeleine Albright, Condoleeza Rice and Hillary Clinton). Yet apart from these celebrated and important leaders, the data on women's participation in American political institutions do not paint a particularly rosy picture of rising political power for women in the U.S. Hillary Clinton mounted a powerful campaign for the presidency in 2010 yet in the end fell short of gaining the nomination, while the Republican ticket, with Sarah Palin the vice presidential candidate, lost. The 2010 elections saw the number of women in the U.S. Congress slip and the percentage of women in statewide executive positions decline to 22.1 percent from a high of 27.6 percent at the turn of the 21st century. It took more than 130 years for American women to gain the right to vote and it wasn't until 1933 that the U.S. saw its first female Cabinet secretary, yet there still hasn't been a female vice president or president. More broadly, the question now is whether the advancement of women in American politics is flowing or ebbing.

When we compare the U.S. to other large wealthy countries in terms of female political participation, the most common metric is the percentage of seats women hold in the national legislature. Women occupying a percentage of legislative seats that matches their percentage of the population would constitute perfect equality on this metric, but no comparator country comes close to that. The leading countries in this comparison are the Netherlands and Belgium, while the laggards are Greece, Korea and Japan. Some of the gap is due to different national perceptions of women in politics. A World Values Survey found that Americans have more negative views of women's ability in politics than do citizens of Australia, Spain and Germany. Korea and Japan show even more negative views, and this correlates strongly with women's representation in those nations' legislatures -- a likely reason that researchers conclude that gender attitudes are a primary factor in determining the level of female representation. 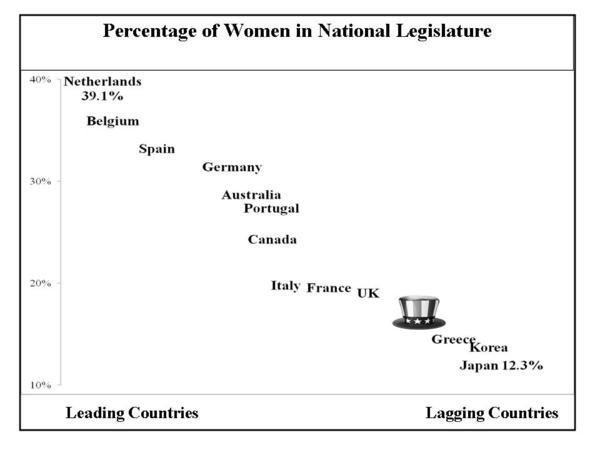 One proposal to increasing female participation relates to the voting process itself. Shifting to proportional representation models rather than America's winner-take-all system could help elect more women representatives -- and might encourage more women to enter politics. That is because with voters casting ballots for the party of choice, gender issues would have to be addressed within the parties; that would make gender bias less anonymous and therefore easier to confront directly. Moreover, women candidates, who typically face greater challenges raising financial support, could rely more on party money.

One measure that is implemented broadly but is not going to succeed in the U.S. is the use of gender quotas for political representation. Of our comparison countries, four (Belgium, Korea, Portugal and Spain) have legislative quotas, eight (Australia, Canada, France, Germany, Greece, Italy, Netherlands and the U.K.) have voluntary party quotas, and only the U.S. and Japan lack any form of quota.

A key goal in The Measure of a Nation is to compare the United States to other wealthy countries, with the idea being to identify which countries are performing the best in each area of interest: health, safety, democracy, education and equality. In each of those areas, the countries that are performing the best are examined to determine which best practices might be applied here in America. In order to do this analysis, we selected the subset of countries that are both wealthy (nominal GDP per capita over $20,000) and have a population greater than 10 million (upper third of national populations, no city-state countries) as a comparison group. This comparison group consists of 14 countries: Australia, Belgium, Canada, France, Germany, Greece, Italy, Japan, Portugal, the Netherlands, South Korea, Spain, the United Kingdom and the United States.