For many of us, Presidents Day means an extra day off work and the chance to hit up the holiday sales. But, as we recall from our school days, it's actually more than that. What originally began as a day to honor the birth of George Washington has evolved into a grand celebration of the office itself -- an office that has, so far, only been occupied by men.

Not that American women haven't taken a shot at it. A handful have made memorable runs for the Presidency -- from Victoria Woodhull and Belva Ann Lockwood in the nineteenth century, to Shirley Chisholm and Hillary Clinton in our lifetime. (Gracie Allen even did a brief run in 1940, under the banner of the Surprise Party!)

But America has never leapt over that final gender barrier by electing a woman to our highest office -- and the interesting thing is, so many countries around the world have achieved that equality.

Familiar to all of us are women like Margaret Thatcher, Indira Ghandi and Benazir Bhutto, all of whom made history. But they were just the tip of the spear. If you Google "women world leaders" you'll see a whole new generation of women with real power across six continents, all of them living proof to young girls and women that hard work, education, dedication and a true passion to lead can make it possible for any of them to rise up and reach their greatest potential.

Today is a day for all of us to be proud -- of America and of our leaders. We all have our favorite Presidents, and it's great to take a moment to honor them. But wouldn't it be inspiring if we could at last join all those other nations with a woman leader of our own?

When that day comes (and if Hillary taught us anything in 2008, it's that that day is just around the corner), we will be one step closer to being a nation in which gender, race, creed and sexual orientation are no longer issues in the workplace -- or in politics.

Until that time, take a look at some of the current women in power around the globe. I'm sure you'll recognize some of their names, but you may find a few surprises too! -- MT

Women of the World: Power and Leadership
Women in Power 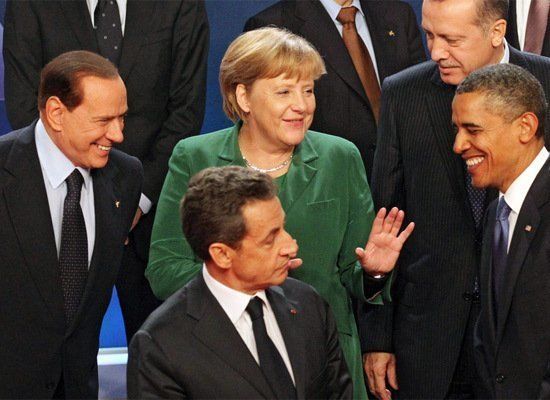 1 / 19
Angela Merkel, Chancellor Of Germany
Angela Merkel has been the Chancellor of Germany since November 22, 2005. The daughter of a pastor and a teacher, she was born in Hamburg, Germany on July 17, 1954. She studied physics at the University of Leipzig earning a doctorate degree in 1978, before entering politics in the wake of the revolutions of 1989. In 2007, she became president of the European Council and the second woman ever to chair the G8 (Margaret Thatcher was the first.)
Getty Images